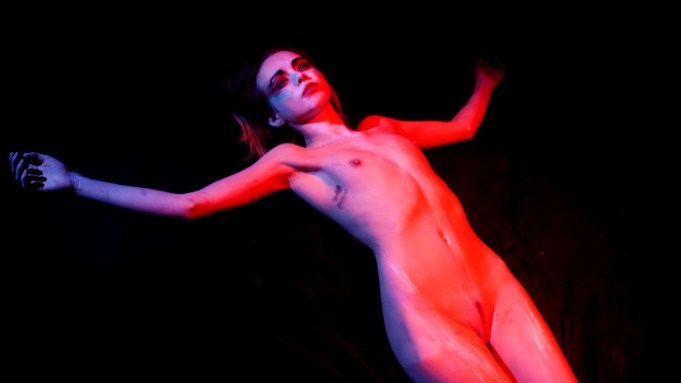 Known for surreal, occultist films and performances, Los Angeles-based artist and musician Brian Butler debuted his new film Babalon Working, starring actress Paz de la Huerta, at the Museum of Contemporary Art Los Angeles on Sept. 19. With a manic no-wave soundtrack, featuring guitarist Chris Stein of Blondie as well as the German electronic band Popol Vuh, the highly stylized eight-minute film uses symbolism and the archetype of woman-as-vessel to explore what Butler refers to in the press release as “the layers of ecstasy, madness, and creativity that mediate man’s voyage between life and death.” In the film, Paz emerges as a shadowy “scarlet woman” whose journey Butler binds to that of a young waiflike presence that undulates atop a floor emblazoned with obscure occult symbols.

Now viewable on MOCA TV, the film was followed by Transmigration, a live performance in which Butler used orgone generators, stroboscopic lights, low-frequency sound waves, a violet ray machine (an antiquated medical device) and colored light trained on Paz in the form of geometric shapes on Paz, transporting her and the audience to a hallucinatory, trance-like state.

Butler spoke with A.i.A. after the performance about altered states of consciousness, his roots in surrealist theater and the embrace of darkness as a creative force.

YAEL LIPSCHUTZ Transmigration registered as both a form of mass ritual and a noise concert. I was interested in your use of equipment like the violet ray machine, which, together with the strobes, transformed de la Huerta into a body of light, an aura of herself that seemed to violently disappear in front of our eyes. You have spoken about the importance to your work of such dematerialized states. Can you say something about the space you are accessing?

BRIAN BUTLER I’m tapping into a metaphysical realm where limitations of space and time don’t exist. So there are several things going on at once. It’s between a dream and being awake. It’s a state just between those two. And if you can stay there, then you can channel something otherworldly, nonhuman.

LIPSCHUTZ The occult has roots in Los Angeles, particularly with the activities of people like Jack Parsons [1914-1952] and Marjorie Cameron [1922-1995], yet you situate your work within an international theater-based genealogy that includes Antonin Artaud and Michael Chekov. Could you tell us about that lineage?

BUTLER Jack Parsons began occult practices in Los Angeles in the late 1930s. Most of his workings were based on the teachings of Aleister Crowley, who, in turn, was heavily influenced by Edward Kelly and Enochian magic. So it was important for me to return to the source. I shot Babalon Working on location in Prague, where Edward Kelly conducted magical experiments in the 1500s, encountering an elusive childlike spirit named Madimi, who ultimately transforms into an older and powerful Babylon figure. As my practice expanded into feature film, I began reading [Constantin] Stanislavski and the standard texts on working with actors.

I became fascinated by Michael Chekhov, whose occult techniques, which he called atmospheres and radiation, were very similar to what I was doing already such as on the set of my film Night of Pan with Vincent Gallo [2009]. Antonin Artaud, in his writings on performance, is coming from a much more intense place—to really understand the Theater of Cruelty and the impact it can achieve, you must know pain and madness by firsthand experience. This can only come from action, from actually practicing magic and producing art. This to me is where it all connects. Jack Parsons, like Artaud, welcomed this darkness—he knew it was a necessary process and stated that he would likely die or go mad if he didn’t make it through the ordeal. He left a letter that said in the event he died or went mad to tell all the new students that he wouldn’t have missed it for anything.