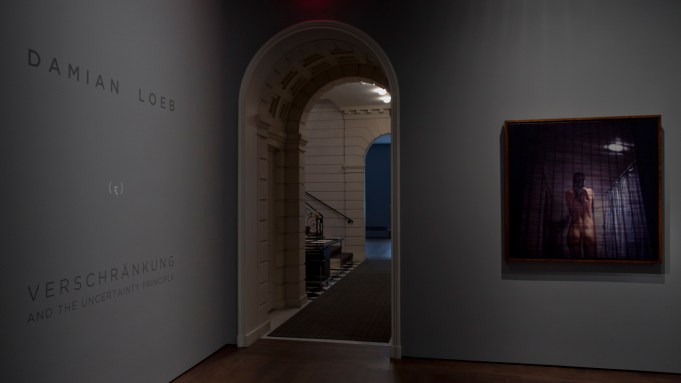 “Verschränkung and the Uncertainty Principle,” Damian Loeb’s second solo show with Acquavella Galleries in New York, features a selection of paintings of the artist’s wife, Zoya, a former model, in various states of undress in the confines of private, interior spaces permeated only by natural light and the artist’s vision. “Verschränkung,” most often translated from German as “entanglement,” represents a state in which two entities are so inextricably intertwined that they become perpetually aware of one another. Loeb evokes this term to as a means to investigate his own intimate relationship.

In eight square oil paintings of various sizes, Loeb elaborates on a career-long fascination with the glossy world of other people’s images. In the past, this has consisted of painted representations of digitally manipulated and collaged stills from canonical films like Lolita, The Graduate and The Color of Money, and provocative photography culled from various print advertisements and other popular media sources. These most recent photorealistic impressions reveal a radically new endeavor for the artist. They are generated from over 200,000 digital photographs taken by Loeb, allowing him to turn what he calls “virtually re-imagined memories” into formal compositions.

Loeb’s vantage point toggles between that of an intimate observer and true voyeur. His fascination with the role of social media in contemporary society led him to share, in his paintings, moments and images he considered truly private.

ALEXANDER ADLER: Zoya’s presence in these images obviously triggers for you specific memories and physical sensations. What is the role of sense-memory in these works?

DAMIAN LOEB: I am fascinated with memories and moments. The best I’ve ever been able to convey it is “honeysuckle”; it’s my equivalent of Proust’s madeleine. When I smell honeysuckle, I’m instantly transported back to when I was 11 or 12, walking on a country road near my childhood home in Connecticut. I recall everything associated with that honeysuckle bush: the houses, what I was thinking about at the time. My fascination with this effect made me want to manipulate these kinds of synesthetic triggers. First, I wondered if there were universal cues that I could incorporate into my work. Many art forms, when wielded by masters, can trigger similar effects. I mentally collect those examples.

ADLER: Paintings like Ghosts I-IV (2010) and Say Hello to the Angels (2010) both depict your wife from extremely close vantage points, but in the former she seems unaware of your presence and in the latter she’s totally engaged, staring straight into the lens. Are these images meant to expose various facets of your relationship?

LOEB: The most personal work from the show is probably Primary (2009), the one painting with my daughter Vivian in it. It was the first painting I did for this series. Early on in these works, even Zoya figured only as a surrogate, and always obscured. When I finally realized that I wanted to approach these works without the filter of allegory, I picked the most vulnerable images I had collected over the past few years to work from. My work, though highly representational, is ultimately a conscious creation of my own design. Years of having odd bits of my personal life scrutinized by the press and taken out of context had made me very reluctant to share any more. But I’ve always found that what I want to run from is what I need to turn to if I am to be in control.

Own it, or be haunted by it. The show as a whole was painful to complete because I knew that I would be exposing Zoya to a new scrutiny and that my paintings would be the tool by which she (and my own feelings) would be measured. In Welcome to Paradise v1.0 (2011), Zoya is virtually in silhouette, a limiting form of description. At that size, the difference between her beauty and a beast is just a heartbeat’s nudge of the brush. I held my breath a lot and tried to think about something else. Better Ways (2011) was another that was difficult because I only had one eye to capture all of her essence.

ADLER: Does your photorealistic technique reflect the way that your memory works?

LOEB: My favorite photorealistic work duplicates that flat feeling of holding a Polaroid in your hand. But I’ve always wanted more. In my painting, I had to find a way to make the image look like a cross between a photograph and a Pre-Raphaelite or Dutch painting. I thought about our exposure to photography and media. Appropriation, of course, was interesting to me. Unfortunately, I got sued a lot because I assumed that it was acceptable and everyone was doing it.

ADLER: Did that problematic reception of your work—the over-emphasis on appropriation—steer you toward these more personal works?

LOEB: Remember, in the late ’90s and even the early 2000s, the Internet wasn’t what it is now. Most of my early work had either copyright issues with the foreground or background elements. The law protecting artistic expression is a sham implemented by and structured to protect large corporations’ intellectual property. No artist can ever have hope of winning, let alone surviving a copyright suit under the current law. I barely did and spent years recovering both emotionally and financially. Even now, because of settlement agreements, I can’t display or reproduce certain paintings like Little Miss Pink Tomato (1997) and Deep South (1999) without permission and a lot of extra credits to a variety of sources. All the appropriation stuff was me but it was subterfuge.

ADLER: To make these paintings, you were in a sense reproducing imagery, but your own. Which seems, in a way, to be a critique of the depersonalized notion of appropriation.

LOEB: After shooting everywhere and realizing that the only way I was going to get a body of work that I could plagiarize, that was mine, was to shoot all the time. To get the 200,000 photos, I had to do it constantly. Luckily, Zoya was a professional model and innately comfortable in front of the camera. She’s good at compartmentalizing and ignoring the camera. We’d talk as though the camera wasn’t there but every once in awhile I’d be on my knees taking a picture. Seeing the pictures later, it was her looking at me, not at a camera.

ADLER: I found myself wondering about Zoya in Atmosphere (2010) where her arm is isolated and painted angled upwards, pointing off the picture plane, whether you were depicting a moment of elation or panic. This picture doesn’t seem to channel a moment but rather a scene or allegory.

LOEB: The slowed-down scene is an apropos comparison. After my early series of collaged images, I switched source material and began to primarily use film stills. I wanted to figure out how to capture a moment and thought about what scientists do when they attempt to slow the speed of light. In essence, it’s impossible. You can’t capture a moment, a situational moment. You can get an instant. I squared all my compositions to get rid of some of the length of the narrative. If I could capture the same feeling in the square, I’d done it. In a way, I’d slowed light. Everyone I know will describe a painting of mine by describing the subject-but they’ll interpret what’s going on differently.

ADLER: Did you feel like a voyeur while making this work? Is this related to the idea of “Imagined Presence” referred to in the press materials?

LOEB: Sure I did. I was searching for a way to be present psychologically but remain invisible physically in the finished paintings. Ultimately, the goal was for the viewer to fall into my position and experience what I did while looking at Zoya. I want the experience to be immersive and with that, I want you to feel uncomfortable and like a voyeur because you’re looking at something that you shouldn’t because you don’t know her. Still, on the contrary, there’s that illusion of familiarity, standing there in the gallery and feeling comfortable even when you know you shouldn’t.