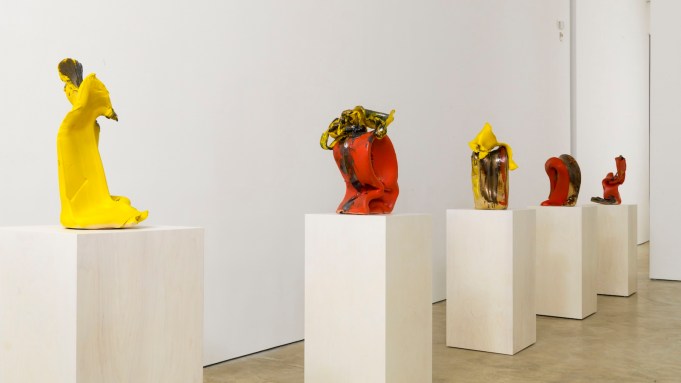 These variously sized sculptures, many of which are around 2 feet by 2 feet by 1 foot, are displayed on plinths. They are largely composed of hollow, rectangular, machine-shaped clay, which Benglis then collapsed, curved, split, tangled together or otherwise crafted before painting and glazing in smears, splashes and drips. Unvarnished areas and orifices are frequently left exposed. One globe-sized, bubble-gum pink orb on an attached base has the look of a model brain. Nearby, glazed in mauve, ochre and grey, another resembles a warped, miniature Gateway Arch wearing an abstract headdress.

Benglis maintains homes or studios in New York City, Santa Fe, N.M., East Hampton, N.Y., India and Greece. She spoke with A.i.A. by phone last week from her home in Santa Fe about her love of surfaces, the recent death of her partner, gaining from loss and the experience of moving.

TRACY ZWICK What drew you to this material? Why ceramics?

LYNDA BENGLIS I’ve been working with ceramics since the 1990s and before that I did them in school. In terms of the mediums I choose, it’s a matter of a rounded diet. I can’t claim to be a master of anything. It’s a diet. I’m just hungry and greedy!

And I’m a real fan of surfaces. My father was a wholesaler of building materials in Louisiana and had samples of colors and plastics and laminates and woods in his car. I was always very interested. I wasn’t afraid of experimenting; it was like going into somebody’s kitchen, and I like cooking.

ZWICK How did you develop this method of fabrication that includes both machine production (an extruder) and manual manipulation? Do you make or even envision a design before you start working with the clay?

BENGLIS The process includes me holding the material, which is important. When I do ceramics I feel a need to kind of wrestle with the material and be integrated with the form and the surface. I can only tell you that the thinking in it is so fast. It’s a dance. I feel the clay; I am the clay, so to speak. I feel this in all my work, that I am the material and what I am doing is embracing it and allowing it to take form.

ZWICK The body and landscape have been key reference points in your oeuvre. Are there intentional sexual references in this work?

BENGLIS They are all to do with nature. I can’t deny anything the viewer reads into the work; that is the viewer’s pleasure, hopefully. I am a permissive artist. I allow things to happen. I believe the viewer is half the work. Duchamp said it and I believe it.

ZWICK What inspired your color choices? There are some blacks and grays, but otherwise the palette is desert shades including yellows, browns, reds and greens.

BENGLIS I’ve chosen the colors as a painter would. I thought I really had to do the red and yellow because I’d been a little timid and I wanted to allow something else to exist. There was a lot of black in the beginning because I lost my partner of over 30 years, Anand Sarabhai. I felt the loss in the earlier pieces when he was sick. He died a year ago in February. I was with him for a long time; I could not be away from him more than an hour toward the end. He felt that partnership and I did too. We danced, and toward the end I danced with him by moving his feet back and forth. I played drumming music, which was his favorite. If I had titled this show it would be called “The Dance.” When you lose something you love you try to gain something too. I just threw myself into the work.

ZWICK But you didn’t title this show, or any of the sculptures. Will you give these pieces titles? Are titles important?

BENGLIS I worked up to the very last minute on this show and I just haven’t had time to sit down and formalize titles. Yes, the title does matter. If you assign a work a number, it’s hard to remember. It doesn’t conjure up an image, and I do make images. Even though they are processed, they are symbols of feelings and they’re symbols of associations. I’m interested in complexities that are simplified.

ZWICK How, if at all, does this new series relate to your early, groundbreaking work in poured polyurethane and latex?

BENGLIS My work is an expression of space. What is the experience of moving? Is it pictorial? Is it an object? Is it a feeling? It all comes from my body. I am the clay; I have been extruded, in a sense. How to tie it together? I don’t need to tie a knot. The forms of knots in my earlier work were expressive of this idea. I am the form. There are more landscape influences in the current show in terms of expression and feeling. They are pictorial. This is as near to painting as I’ve been.

ZWICK You’ve said you began your career about a half-century ago in New York as part of a group of artists who were asking questions about where art was going and what art could be. Where is art going? What can art be?

BENGLIS I think no one knows. That’s why we keep looking.