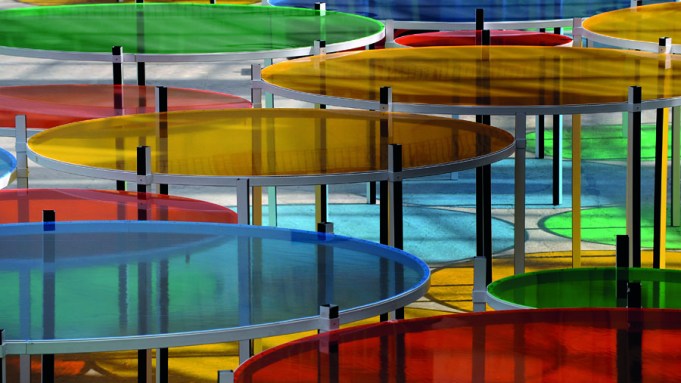 Following Anish Kapoor and Christian Boltanski, it is Daniel Buren’s turn to be Paris’s guest and the subject of the annual, majestic solo exhibition “Monumenta” at the Grand Palais. A lifetime opponent of ceremony but a master of art done in situ, the Paris-born Buren’s career involves a consistent development of tools that aim to reveal their environment’s architectural and symbolic complexity.

Since 1965, Buren has primarily used stripes in two colors, covering the street or billboards, or most notoriously the rotunda during the Sixth Guggenheim International in 1971, when the other features artists successfully rejected his contribution.

Perhaps surprisingly, Buren’s exhibition Monumenta 2012 [open through June 26] doesn’t tackle the height of the curved building space like previous shows have attempted to do. Instead, the artist has focused on a game of natural light: after passing through a specially-built, tunnel-like entrance, viewers are faced with a “forest” of sheer, colored disks on four black and white pillars. Depending on the weather and the time of the day “one can see 5 or 6 different shade of the same color within the day,” said Buren.

In an approach that echoes the tinted windows of his 2005 solo exhibition at the Guggenheim, the fluctuations of light reflect Buren’s enduring aim for a single piece to trigger an endless variation of experiences.

A.i.A. spoke to Buren about the imperceptible politics of the Grand Palais.

ALICE PFEIFFER You’ve installed in a massive structure with overwhelmingly high walls. What are the physical challenges of such volumes?

DANIEL BUREN This is a very complex space. It’s both inspiring and dangerous-but not so much because of its size. The risks are linked to its beauty: the Grand Palais’ interiors are sumptuous, as green houses and glass buildings often are. You have to pay special attention for it not to dominate everything you do.

So this is the basic data you have to work with. Challenging its height is the first thing that comes to mind, but it’s not necessarily the most interesting one. You’ll always risk being slightly ridiculous if competing with such a height. I think Richard Serra is the only one who did it successfully.

PFEIFFER How did you tackle the space?

BUREN The condition under which I accepted to show here was if I was allowed to block the main entrance, and only use the smaller, side ones. Because this main entrance is extremely badly placed and destroys everything you can do here. I hence created a tunnel for people to walk through, and gradually see the work.

PFEIFFER You once wrote that “museums guarantee a piece of work as art”—arguably Monumenta guarantees the artist as a kind of genius. How do you feel about that?

BUREN I try not to think of things on that level—I’m pretty happy to have been invited of course. [Laughs.] What I do think about is the incredible difficulty of finding artists suitable for such a challenge. Monumenta is an incredibly tough concept. Of all the artists I know—and I know quite a few by now—I can only think of 15 who would be able to do a good job here, because the space is so complicated. There are several artists who work on space, but few truly work with space. If Monumenta is to keep going for 20, 30 years, it’s going to be a tough ride. And a bad Monumenta show is far more tragic that a bad Centre Pompidou show.

PFEIFFER Following the infamous 1971 Guggenheim group show “The 6th Guggenheim International Exhibition”, your work has often been perceived as provocative and triggered violent reactions. Do you think this show could raise controversy?

BUREN Provocation has never been my aim, I never created a piece of work thinking “let’s annoy the bourgeois.” I find this type of approach totally pointless. When three of the artists at the Guggenheim show managed to get me kicked out, it came as a total shock—I mean, the piece had been validated by the museum.

Here at Monumenta, they can’t exactly kick me out. I certainly hope my work will create a debate; that’s always fantastic. But when a piece turns into a real polemic, like the Palais Royal gardens, this can be very hard. I don’t think my work has ever been provocative-but artists wanting to kick someone out of a show-now that’s provocation.

PFEIFFER You have never worked with a curator, and wrote in a 1970 essay, “Fonction du Musée,” criticizing the role of curation. Have your views changed?

BUREN There was no curator for Monumenta, nor for any of my shows. The idea of a curator for a solo show is something totally absurd to me. An artist needs someone to help him of course, but what do you need a curator for in a solo show? To do your grocery shopping? I can see the point in a group exhibition of course—but it can be a questionable practice when the curator becomes the only artist in the show, at the expense of everyone else. I feel this issue is present today more than ever.

PFEIFFER So you do not fear a “risk of museography,” as you once wrote about every artist’s creative act?

BUREN What you’re referring to is a text I wrote in the late 60s—and I feel some of it is no longer valid, because museums have changed so much since. They are not as dictatorial as they once were. Contemporary museums can be… well, just about anything really.