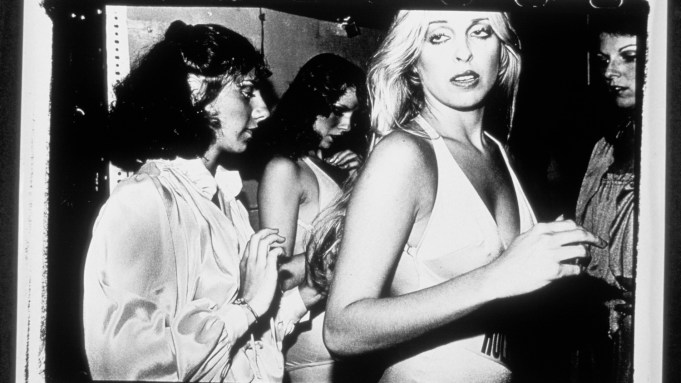 For over thirty years, Daniel Joseph Martinez has explored physical bodies as political instruments. In his current exhibition, “I want to go to Detroit: Cheerleaders CHEER,” at LAXART [through March 3], Martinez shows two series of photographs from early in his career. Featuring men and women who have made themselves over as idols, the artist’s pictures shuttle past the possibility of objective documentation. Martinez’s photography concerns naturalism and beauty, with subjects who create futuristic avatars for themselves.

“I used to eat lemon meringue pie till I overloaded my pancreas with sugar and passed out; It seemed to be a natural response to a society of abundance,” better known as the “Body Builder” series (1978), comprises black-and-white photographs of bodybuilders individually rehearsing sexualized poses against a white portrait scrim amidst the crumbling drywall and cinder blocks of warehouses. Taken backstage at competitions in Southern California, the proud, autoerotic gestures belie a subculture in decline.

For “I always wanted the ears of Buddha, the will of Nietzsche and the body of Mishima,” or the “Beauty Pageant” series (1979), the artist photographs young women and the members of their communities off-stage and behind the scenes in crowded photographs. An officiator enters stage-left in one image, eyeing the back of a swimsuit-clad contestant while two others, Ms. Apple Valley and Ms. Barstow, pose for Martinez’s camera. In another, a worried blond blazes white in the foreground, staring beyond the artist while Ms. San Luis Obispo smiles brightly in her gown.

Martinez walked A.i.A. through the exhibition on a recent Saturday.

PAUL SOTO The inflated bodies from the “Body Builder” series seem to create syntax when grouped together. Like letters strung together, their flexed musculatures form some sort of emerging body language that wouldn’t be possible without your particular arrangement.

DANIEL JOSEPH MARTINEZ Gestures and movement, and their static positions, were all considered. This series has asymmetrical groupings that differ from the very conventional ones in “Beauty Pageant.” Those smaller pictures require a different kind of reading, and these—not that they require any less—have relationships that get built in the conversations in their groupings.

SOTO The “Body Builder” images are pared down, and the subjects’ affects are flat, deadpan. The “Beauty Pageant” series, by contrast, is more exuberant and expressive, with people spilling out of the edge of the composition.

MARTINEZ The bodybuilders are posed, but anti-posed. These images were shot right before they would go onstage. I threw down a piece of paper and had competitors go in front of that to hit a pose that the seemed most natural, or the most common, immediate gesture that comes, usually one of strength, and then move on.

Both of these series are distinct along the line of gender and social acceptability. The bodybuilders receive a more minimalist treatment, which reflects the seedy, underground quality of those competitions. The beauty pageant, by contrast, was a platform that was more process-based, traditionally, and hierarchical, in that these women represented communities of people. Contestants in these photographs are embedded in de-centered compositions that play on the multiplicity of desire behind the scenes.

SOTO So these shots are less public displays, and are more like private rehearsals.

MARTINEZ That’s right, the photographs are in that in-between space. You’ll notice that there are no stages pictured. The intervention of the camera operates at a pop level because these kinds of activities at the time are popular, but are in decline. These bodybuilding contests don’t really exist anymore, and beauty pageants are in decline. This open competitiveness has been traded in for American Idol, or Bravo’s Work of Art.

Ironically, these popular culture activities, and the focus on the organization, manipulation, control, and re-representation of the body, are very much in tune with what was occurring in contemporary art at the time.

SOTO You were at CalArts when you made these series, working under John Baldessari, Michael Asher and Douglas Huebler. Your work, though grounded in documentary images, seems influenced by conceptualism because it’s steeped in the critique of representation in culture at large.

MARTINEZ At the time, an intellectualization of photography and representation were occurring. In Baldessari’s case, he was deconstructing the image and what representation stood for through additive and subtractive forms in his images.

The series also come from an analog tradition. At the same time, these photographs do not reject the operation of how we look at images now and how we construct them with technology. All images today are untrustworthy because of Photoshop. Today there is no image that doesn’t have an effect overlaid, at the push of a button.

These two series reflect the current representation of images as a manipulation, because, you’re right, these images could have easily been Photoshopped. They have a certain elasticity in that respect.

SOTO What do you mean by “elasticity?”

MARTINEZ It’s a quality that you would never attribute to, say, works by Diane Arbus. You can’t look at an image by Arbus and imagine Photoshop techniques had been applied. They don’t have the appearance of being manipulated by digital effects. What these works have is a certain affect of potential digital manipulation.

SOTO So the body is a metaphor for the carnivalesque in photography?

MARTINEZ You confront one image, and then encounter the set, and experience being “behind-the-scenes”—especially in the Beauty Pageant series. I think of [Alejandro] Jodorowsky’s films. In Holy Mountain, there is a famous shot with an incremental pullback, where he exposes the artifice of the actors and actresses, then of the camera, then of the set, further and further. Each level amplifies the feeling of artifice. “Slippage” would be the word I would use. It’s just sliding. It’s not the subject matter per se, but it gives you just enough information to give you two sets of information that you have to grapple with, so that you oscillate between those points, and you ask yourself what it is you are looking at.