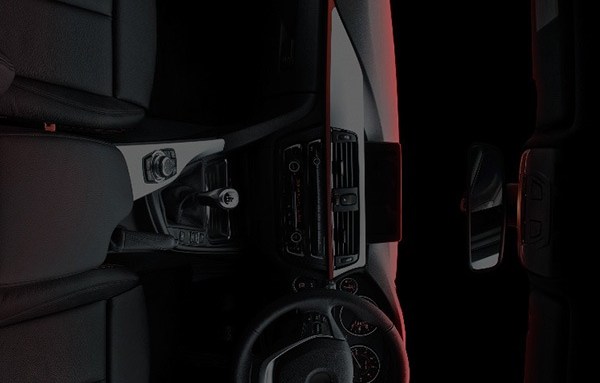 The “lights out” factory—devoid of humans, run entirely by machines—has long been a dream for industrial manufacturers. Twenty-five-year-old, New York-based artist Wyatt Niehaus describes it as “an entirely automated factory—one that could run without lights, heating, air-conditioning and most other requirements of human labor.”

Niehaus has long been interested in the concept, which forms the basis of his solo show (through Aug. 24) at Retrospective Gallery in Hudson, N.Y. The “Lights Out” series comprises eight 40-by-60-inch high-resolution C-prints showing dimmed luxury car interiors cast in a foreboding red hue. Also featured is a piece from the artist’s “Body Assembly” video series, which documents a production process dominated by large industrial robots, captured at both Rex 2013-International Robot Exhibition in Tokyo and FANUC in Oshino, Japan. Together, the works detail the changing visual language of contemporary automated manufacturing and examine the shifting role of labor in the production of consumer goods.

Niehaus talked to A.i.A. in person and via e-mail about his interest in extreme automation, its similarity to aspects of artistic production today and the changing visual landscape of the factory.

LOUIS DOULAS How long have you been researching “lights out” manufacturing? What interested you at first?

WYATT NIEHAUS I started this research about a year ago. Initially, I was predominantly interested in the terminology and how provocative and illustrative it was. The contemporary factory floor is becoming more and more mysterious as technologies advance and human workers are a less vital part of day-to-day production. Registering the visual appearance of facilities that might soon go entirely unseen became a very compelling task to me.

DOULAS Do you think these concerns and concepts warrant a comparison to artistic production today?

NIEHAUS I think both the factory as a space and the studio as a space are slipping from popular consciousness as centralized locations of production. Whether producing a car or an artwork, these sites are becoming less concrete, recallable places. I’m interested in sustaining a long-term discussion about both while still accepting that large-scale automation is an inevitability.

DOULAS Producing the “Body Assembly” videos involved going to film the machines in various manufacturing plants, showrooms and convention centers around Japan. How important for you was it to actually be on-site, collecting original footage?

NIEHAUS There was a specific aesthetic—the fetishized, sleek look of this new, highly automated method of production—I wanted to capture that the majority of the existing footage didn’t have. I shot my own footage at a few separate companies, though the one that features most prominently in the video works is a company called Fanuc, based in Oshino. They have a very intense visual brand and corporate culture that I was fascinated by. My favorite examples, recounted in Eric H. Kessler and Diana J. Wong-mingji’s 2009 book Cultural Mythology and Global Leadership, is the company’s use of both a Keyaki tree and a clock running at 10 times the pace of normal clocks. The Keyaki tree is extremely common in Japan, and the company’s founder views it as a metaphor for strong, stable leadership and company growth. The accelerated clocks are strategically placed in the research facilities, in order to motivate employees to move and work at the quickest pace possible.

DOULAS The only sounds in the video are those of the machines themselves. It’s mesmerizing. Was this a tactic employed to sidestep the stylistic rut of art-qua-documentary?

NIEHAUS I think that one of the more traditionally human things about historical notions of the factory is the way that sound exists in the space. There are loud, disorderly clanking noises, muddled shouting, etc. One thing that became immediately clear to me when researching entirely automated factories is that all sound in these factories would be programmatic and cyclical. The aural experience of the space would be looping and droning-inherently systematic. So that felt like one of the most jarring indications of the lack of human presence, and was something that I immediately tried to represent in the video.

There are certain artists, like Harun Farocki and Lucy Raven, who have embraced the documentary style without formalizing it within a journalistic structure—capturing the immediacy and contemporaneity of a subject while allowing for a wide breadth of interpretation of the content placed in front of the audience. Working in this way operates more as an expansion than a circumvention of the documentary style.