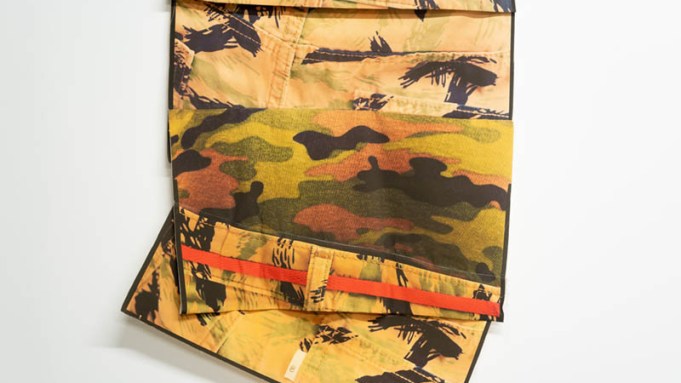 David Alekhuogie’s interest in identity politics developed at the beginning of his career, when he was working as a commercial photographer. Noting how discrepancies between pop-culture imagery and fine art photography corresponded to divisions of class and race, Alekhuogie started mixing tropes and techniques from various fields in his artwork. His “Pull_Up” series (2017–) depicts men in sagging pants, a style associated with urban culture and black masculinity that has been criminalized in parts of the United States. Alekhuogie’s most recent body of work incorporates images of graphic textiles, such as bandanas and camouflage, as well as repurposed pictures from the “Pull_Up” series. He digitally abstracts and blurs these images before printing them on fabric and sewing them into a series of flags. Drawing inspiration from nineteenth-century African American quilts that were sewn to communicate coded messages detailing escape routes and safe houses along the Underground Railroad, the Los Angeles artist unpacks the social stratification behind sagging pants and other signifiers of belonging. Below, Alekhuogie discusses the relationship between the American landscape and body politics—the regulation of and struggle for control over the human body through societal practices and policies—at play in “Black Satin,” an exhibition of new prints on fabric. Organized by Commonwealth and Council and hosted by Company at Baby Company as part of Condo New York, the show is on view through July 26.

Much of the work in this exhibition grew out of my earlier “Pull_Up” series, which addressed my parents’ frustration with how I dressed when I was growing up. At one point, Barack Obama said men needed to pull up their pants. In his plea, I heard my parents trying to make me assimilate into American culture. My dad is from Nigeria and my mom is from south central Los Angeles. My mom worked hard to raise us outside the city as an upper-middle-class family, but suburban life was alienating. In school, I was the only black kid in the classroom. I graduated from high school in 2004, around the time hip-hop transitioned from the margins to popular music. This was when I started thinking of Tupac as a messiahlike character. I wasn’t aware of it at the time, but as an adult, I see him in the same way as I see Martin Luther King Jr. and Malcolm X. In my work, specifically elegy: glendale medical center and elegy: cedars sinai medical center, music and its legendary figures become avatars I seek kinship with.

I think of saggy pants as a code—a signifier of a particular person or group of people. Wearing saggy pants is a vulnerable act that, by itself, doesn’t pose an immediate threat, but we see it as dangerous because of how society has contextualized it. The bandana motif in cousins came from this idea. One of my first role models was my cousin who was a Los Angeles Crip and is now in prison. I look at the bandana as a nonverbal way to signify community. As in a flag, the graphic elements and colors in a bandana act as shorthand. The difference is usually that a flag is directly attached to land. People still fly the Confederate flag in the United States today, and I’m not sure whether they’re trying to define themselves ideologically as a group within this country or to dissociate themselves from it entirely. Overall, the flag is about laying claim to a physical and ideological space, while the bandana is more about signaling affiliation with a group. There’s a difference between saggy pants and flags, and between bodies and land, but I conceive of the body as a space.

In Southern California, people seek out the landscape. It’s easy to forget centuries of politics that have defined it as a place. Ultimately, despite its natural beauty, the land is not ideologically pure and the idea that it’s available for everyone feels disingenuous. Nineteenth-century painters used the American landscape to explore the concept of the sublime, showing nature at its most fearsome and torrid. There is often an overwhelming sense of violence and passion in these depictions, not dissimilar from human desire. The sublime is a space we don’t understand but are attracted to and also fear, and I began thinking about how similar emotions can apply to our perceptions of the body. If I place a person’s waist at the point of a canvas where a horizon line would be in a landscape, like I did in panafricana, the work then interrogates the relationship between an intimate part of the body and the way we see the natural world.

I’m interested in the way people demonstrate identity. One theme in both my “Pull_Up” and “Negative_Positive” [2015] series was how people lay claim to American brands such as Calvin Klein, Polo Ralph Lauren, and Nautica by displaying them outwardly on their clothing. Similarly, the flag as a graphic object monumentalizes a set of ideologies embraced by a group of people. The image of a flag and the ways we exercise our patriotism, however, have prescribed rules, and this exhibition has been an exercise in navigating what flags mean and how they function. There is a group mentality present in both showcasing clothing brands and flying flags that is at odds with our society’s simultaneous praise of the “unique” individual. This perpetuation of the fallacy of the individual is a futile exercise that can alienate a person from what actually makes them who they are. As I continue to challenge identity in my work, I never try to run away from my people. I am always trying to find them.