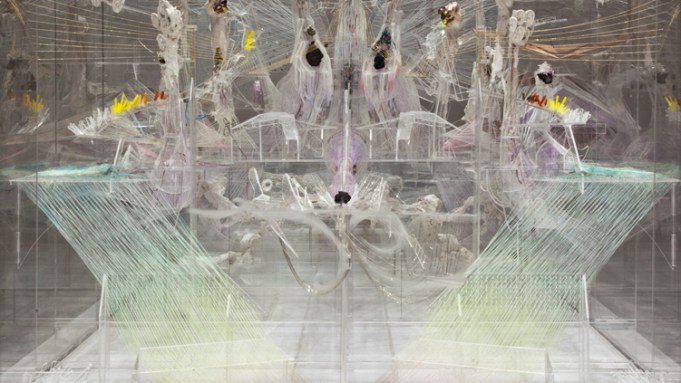 The Canadian-born, New York-based sculptor is best known for his “werewolves”: anthropomorphic compositions comprising fabricated, fragmented creatures, among other symbols of masculinity, desire and transformation. An exhibition of new work at Andrea Rosen Gallery in New York sees Altmejd turning the work inside-out, with two Plexiglas boxes that fill the gallery. Suspended within are elements of human forms diminished and diffused in order to articulate balance. Here the artist talks about creating a new realm of the invisible.

TIMOTHY HULL: There is an odd resemblance in these new Plexiglas works to the structure and circuitry of a computer mega-server or some ghostly mechanical information center. Do these sculptures somehow stand as metaphors for information and energy exchange?

DAVID ALTMEJD: Yes, but I don’t think about technology so much. For me it’s closer to the nervous system or natural aspects of the body. So if you frame the discussion in terms of energy, it’s more about the way it travels through the spine or the nerves rather than being contained in a box.

HULL: Why have you move toward the giant Plexiglas boxes? They immediately make me think of containment or a mechanical support.

ALTMEJD: I started to think of the box not as a means of containing but as an invisible support to hold things—to suspend them in space. Everything is supposed to be in balance and the box is the field of energy. The box is essentially supposed to be invisible.

HULL: Tell me about what I cannot see. What is the nature of metaphysics in regards to your works?

ALTMEJD: I actually wish that everything were visible. I wish that even the energy and liveliness and the potential for transformation were visually evident. There is a history of personal art-making in these works that brought everything to its current appearance. These new sculptures didn’t start at a certain pre-conceived point; each evolved as I made it and there are the signs and marking of its creating throughout the piece. I like the idea that if someone were really to pay attention they could see the history of the piece being made-the actions that formed the object. You can draw connections between all the parts of the work. They’re all connected, therefore you can understand why I want everything to be seen.

HULL: In this work there’s a lot of symmetry and ecstasy that you expect to see in Baroque imagery and architecture.

ALTMEJD: I didn’t set out to make work that explicitly referenced Catholicism but, yes, it has a lot of Catholic aspects. But they are mostly manifest in thought rather than in image. I am drawn to Catholic imagery in general, especially thinking of the representations of bodies as icons. I’m interested in how Catholic visual codes are so connected to the body, the way anything is. Even the architecture of the church is somehow connected to the shape of the body. There is always a central point of energy in those spaces and images.

HULL: Two concepts often discussed in your work are beauty and abjection. What role do they play in these new sculptures?

ALTMEJD: I’m really just interested in beauty. I’m not too interested in abjection. But I realize there does have to be the aspect of its opposite to make beauty appear more real and true.

HULL: I notice there is an absence of mirrors in this show. For David Altmejd that could be seen as a major shift.

ALTMEJD: [laughs] Not really a major shift, as all the materials I’ve used I retain in my material library, metaphorically speaking, so nothing is ever truly absent or left behind. It might be interesting to have included the mirror here but these works are really about the idea of transparency and not perfect reflection or imitation.

HULL: Have you expressly moved away from the monumental figure in these new works and focused more on abstraction and formalism with only smaller references to the organic figure?

ALTMEJD: In these two large Plexiglas works, yes, but not essentially throughout my work. In these works here, the process leads to something sparser and less figurative. If anything, there’s a disintegrated figure. As I worked on these large boxes, they just defined themselves and grew intuitively.

HULL: So the whole process is intuitive? What significance does that have for you?

ALTMEJD: Yes, there are no drawings or plans. It begins in a box very sparsely and grows as I see fit, essentially growing itself. It just happens but it certainly isn’t coming from nowhere—it’s very practical. The way I work is very close to the object, almost microscopically. Every little technical problem I encounter generates a new branch.

HULL: Can you say something about the incidences of handmade bees, ants and other insects inside these Plexi boxes?

ALTMEJD: I started with the thought that I’d like to make a swarm of bees, really. I didn’t expect to have all this other material and stuff around it, per se. Once I installed a box in my studio with some bees in it, I felt like I had to begin working around it. I thought it was interesting to add the ants because they are actually the only things affixed to the Plexiglas, so they show that the invisible exists.

HULL: Although the giant Plexi boxes dominate the space, there are two ghostly figures embedded in the walls titled The Architect 1 and 2 [2011], almost resembling the terrifying angels out of Tony Kushner’s “Angels in America.” Only the impressions of these figures are left. From what or where are these figures born?

ALTMEJD: These figures are literally made from the architecture. They are my first literal installation pieces and they are scrapings inside the wall. I built panels into the wall and then worked from that, making it appear as if the whole wall was scraped out in order to create the figures. There was a lot of technical problem solving that went into figuring out how to make these figures appear embedded. Maybe 80 percent of my work is just this type of problem solving.

The 5 Best Instant Cameras of 2022, Tested and Reviewed by a Photographer