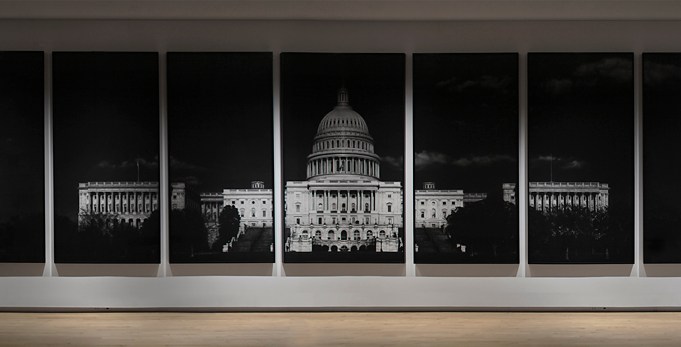 “Politics are something I’m interested in as an artist, because artists are the first people to get shut down when things get out of control,” said artist Robert Longo, who spoke to A.i.A. recently at his studio in New York’s Little Italy. Politics—and their attending monoliths—are endemic to a recent series of drawings by Longo, “God Machines.” The newest addition to the series, which also includes depictions of places of worship, is Capitol (2013), an enormous seven-panel charcoal drawing of the U.S. Capitol Building.

The drawing premiered as part of his exhibition “The Capitol Project,” now at the Aldrich Contemporary Art Museum, in Ridgefield, Conn. (through Aug. 25). The show, organized by New York-based curator Kelly Taxter, is one of the museum’s “Extreme Drawing” series of exhibitions. The large drawing is complemented by display in a lobby gallery of 81 ink and charcoal studies from two other series—”The Essentials” (2000-08) and “The Mysteries” (2009-13).

“The Essentials,” which includes illustrations of ocean waves and sharks, catalogues the images that the artist believes live in the collective unconscious. “The Mysteries,” which represents more pop icons, like Angelina Jolie and a cowboy hat, was produced to metaphorically populate the world created by the former. While Capitol, shown in a low-lit gallery, demands silent and rapt attention, the studies chat with each other, encouraging playful comparisons. “The studies hang out in the studio when I’m actually working on the piece,” said Longo. “They also hang out after, to remind me of what I did. ”

When creating Capitol, exactitude was important to Longo—”I counted all the windows, I did my little Illuminati thing,” he admits, referring to the mystical numerical signatures believed to be the hallmark of the freemasons. He visited the site three times while creating the drawing, which took six months to produce. “I forgot one lamp,” says Longo, and this omission remains in the final piece. “I left it unfinished. I wanted ‘the eye of the devil,’ that one point of imperfection,” he said. The image, installed in a large upstairs gallery, has a dark magic—as both an almost frighteningly precise architectural rendering and a portrait of one of America’s most important centers of power.

It is also gigantic and somewhat foreboding, dominating the space and creating a mood that recalls a house of worship. “Originally it was five panels, and then I realize it needed the extra two panels for the end. I thought, ahh, it’s just going to be so ridiculously big,” said the artist. “But I wanted it to have a place.” The image of the building stands coolly against a black night sky, framed by trees and floating clouds. “The trees on either end are, like, à la Bob Ross, just basically messy shit,” laughed Longo.

For many, Longo’s “messy shit” would pass for perfection. Since his hallmark series “Men in the Cities” (1979-82), Longo has often shown alongside his Pictures Generation peers, as the standout, technically exceptional draughtsman. His drawings—always derived from photographs—are defined by their deep, anthracite charcoal blacks, lit with precise, snowy white erasures. They are as much about the content they depict as they are about the artist’s intense devotion to the practice of drawing.

Longo turned 60 this year, and his work remains as elegantly precise as always. Recently, however, he’s had an experience that shook up his drawing practice at the most visceral level. “I had a stroke—on World Stroke Day. Pretty weird,” said Longo. “I play guitar, and when I first was in rehab I couldn’t play, and I was freaking out about whether or not I’d be able to draw again. But then my recovery was pretty fast. My speech is still not perfect.”

However, the artist was newly inspired by the technology that assisted in his recovery. “I had a great brain doctor. He kept showing me pictures of my brain, and they reminded me so much of these forest pictures I’d been doing,” said Longo. “They became like a portrait of my post-stroke experience: my emasculation, my confusion.”

Pictures, whether of brain scans or war and politics, remain fundamental to Longo. “I’m a product of the still image,” he said. “As a kid, I would stare endlessly at those pictures in Life magazine. There would be a color photo essay of the circus, and a color photo essay on the president. And then you turn the page, and all the black-and-white pictures would be Viet Nam, or the war in Calcutta.” This created a sensibility that dies hard, or not at all, and has inspired a career of iconic image-making. Said Longo, “I think that maybe black-and-white, for me, is about telling the truth.”

‘I Count Myself Hugely Lucky’: David Crosby Looks Back in Unheard Interview Audio