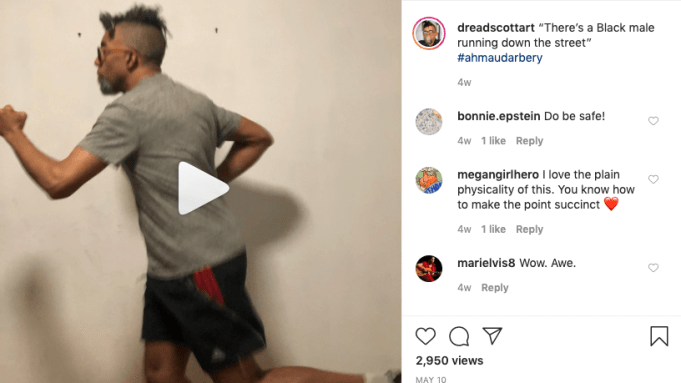 Dread Scott began his career at the center of national controversy with his installation What Is the Proper Way to Display a US Flag? (1989), which prompted visitors to step on an American flag laid on the ground. His work continues to spark national debate and legislation as the artist focuses on the prevalence of racist violence in US history. After the shooting of Walter Scott in 2015, the artist created the flag A Man Was Lynched by Police Yesterday (2015), taking inspiration from the NAACP’s anti-lynching campaign during the Jim Crow Era. Last year, Scott staged a reenactment of the 1811 Slave Rebellion in New Orleans. Amid ongoing protests against racism and police brutality, images of Scott’s work have been disseminated widely on social media. During the Covid-19 lockdown, he also created two social media projects that reflect on the virus’s toll on the Black community. Scott’s work is currently on view in the group exhibition “Mourning: On Loss and Change” at the Hamburger Kunsthalle through August 2. Below, Scott discusses the ways in which his work incorporates the broader scope of American history and current events to incite thoughtful action.

What It Means to Be a Social Justice Curator

There are practical ways in which my work gets taken up by a movement. Images of A Man Was Lynched by Police Yesterday and Sign of the Times [2001] have been printed on T-shirts and shared on Twitter and Instagram—and that’s great. But, more importantly, my work connects America’s past to our present.

It feels important to make work at a time when the system is increasingly showing that it does not care about people—it crushes people. Black and Latinx workers were forced to work without personal protective equipment and to forgo social distancing measures so that others would be more comfortable during the lockdown. The Black Lives Matter movement is raising questions about these deep structural problems. When I made A Man Was Lynched by Police Yesterday, it forced the public to think deeply about the police as inheritors of lynch mob terror. I want people to investigate this decrepit, outmoded system in which we live—to think about it and act.

I made another piece on social media in response to Ahmaud Arbery’s death. I took images of myself running and sequenced them into a short video. The killing of Black people is not new in America. There are over forty-four hundred documented cases of racial violence and lynchings from 1877 to 1950. Many lynchings were photographed, and the images circulated—not just in newspapers, but as postcards that served as threats to Black people as well as mementos for white people. Now we’re seeing present-day videos that were made to serve the same purpose as a photograph of a hanging, but have instead sparked outrage.

Lynching images are also present in the work of artists Hale Woodruff, Isamu Noguchi, and Diego Rivera. It’s important to look at these images. If you don’t know that this is how the police routinely treat Black people, you need to look. You need to hear George Floyd, a man who was handcuffed after possibly passing a counterfeit $20 bill, lying face down with a cop’s knee pressed to his neck, asking for his dead mother and saying, “I can’t breathe,” as his life drains from his body. Many Americans believed that this was no longer a place where Black people were bought, sold, and hung from trees. They were surprised to learn that Black life matters no more now than it did in 1820. What is fortunate about this moment is that many people have looked and are sickened.

My 1994 installation El Grito, with Joe Wippler, envisioned a rebellion leading to a revolution—an American civil war in the future. It was a fantastical piece that highlighted the fact that it took a war to end slavery. Slavery wasn’t a moral question and it was not voted out. The South seceded from the North to expand enslavement. The North initially only cared about preserving the Union. But slavery didn’t end with the Civil War or with the Civil Rights Movement. Under slavery, enslavers bought people. Under capitalism, they rent them—and it’s going to take wars to end capitalism, another system that has enslaved and exploited the planet. What does it mean that thousands of people in the United States—disproportionately Black and poor people—are dead because of the policies of this government? People need to question why they have an allegiance to this system that callously bails out wealthy corporations and refuses to provide essentials such as masks and goggles for hospital workers.

My recent project Slave Rebellion Reenactment [2019] looked at how enslaved people in 1811 tried to free themselves by overthrowing the system of enslavement and setting up an African republic on the ashes of New Orleanian society. The history of this radical vision has been suppressed. I decided to reenact it with 350 Black and Indigenous people. We marched in period costume with machetes, muskets, sickles, and sabers twenty-four miles on the outskirts of New Orleans at the locations where this rebellion took place two hundred years prior. We chanted: “Freedom or death! We’re going to end slavery. Join us!” It was not so much about the horrors of slavery, as it was about liberatory potential: Africans and people of African descent, were agents of change, fighting to be free from this system of exploitation. These enslaved rebels had the most radical vision of freedom and democracy in the United States—this country’s founding fathers predicated their idea of freedom on owning people. The notion of “we the people,” as written in the US Constitution, did not include those who worked the fields—and it could not. You can’t tell the history of America without talking about enslavement, and you can’t tell the story of enslavement without discussing slave rebellions. That’s what I wanted to understand, because it has everything to do with our present.

Days ago, it was very difficult to see a callous lynching, knowing that it’s part of a long history of brutality. I know some people have agonized about these uprisings, but they’re missing the point. These mass protests are among the most beautiful things I’ve experienced in my entire fifty-five years. People across the country—and all over the world—are heroically standing up with tremendous passion and heart to this confusion of police violence, military force, media lies and slander, and threats posed by President Trump. There’s a lot of work to do and a lot of struggle to be had, but we need to celebrate and continue to fight with determination as we figure out how to build a world where all human beings can flourish. Let’s make this count.