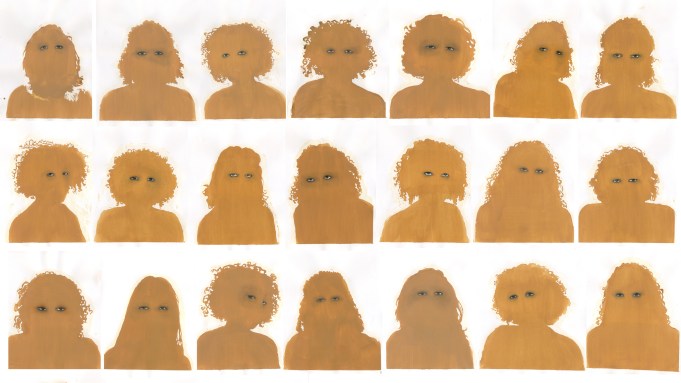 Rocío Aranda-Alvarado joined the staff at El Museo del Barrio as associate curator in the summer of 2009, just before the museum reopened after an extensive year and a half renovation. (She was previously a curator at the Jersey City Museum for nine years.) Aranda-Alvarado jumped right into planning “The (S) Files,” a biennial of Latin American art that is on view through Jan. 8, 2012, with satellite exhibitions at six other venues (Chashama at the Donnell, Socrates Sculptures Park, Lehman College Art gallery, Times Square Alliance, Northern Manhattan Arts Alliance and BRIC Rotunda Gallery).

When the biennial began in 1999, the “S” stood for “selected files,” because the work was (and still is) chosen from the giant wall of artist files stored in the museum’s curatorial offices. Due to the recent construction, El Museo was forced to skip the 2009 biennial, so Aranda-Alvarado and her co-curators, Elvis Fuentes and Trinidad Fombella, had a backlog of files to comb through this year.

The curators stick close to this year’s “street” theme. The urban focus is clear from the very first gallery: there are photos documenting Daniel Bejar’s subtly altered subway signage (“Mannhatta” instead of Manhattan, “Broncks” instead of “Bronx,” etc.); photos of Ryan Roa interacting with outdoor public sculptures via showering, exercising and relaxing under/with them; and Mösco’s abstract paintings on mismatched, pieced together panels of found wood.

Aranda-Alvarado spoke to A.i.A. about this year’s theme, the selection process and collaborating with outside curators and venues.

LEIGH ANNE MILLER: How did you decide to focus on the street, and its related fashion, politics, graffiti, etc.?

ROCIO ARANDA-ALVARADO: The idea of having a theme at all is relatively new. For the first four biennials it was more just a survey of contemporary Latino art. The curators for the last one, in 2007, were Elvis Fuentes-who is still my colleague and also one of the curators this year—and Carmen Ramos. They decided they were going to use the letter “S” to signify a different idea for each biennial. So their year the “S” stood for “secret,” as in “The Secret Files.”

MILLER: So the S stays, but means something different each year?

ARANDA-ALVARADO: Yes. The original “S,” when the biennial began in 1999, meant “selected files,” because in our curatorial offices we have a giant wall that’s dedicated just to artists’ files, all from artists who have sent us their materials because they are interested in showing at El Museo.

Every other year, we go through them and pull artists whose work we think is really interesting, and we set up studio visits with them. Elvis is the one who thought for this biennial he wanted to use the street as an influence, because in the past couple of years, as we’ve been visiting studios, we’ve seen how the street has influenced so many of these artists.

MILLER: Without even knowing that the “S” stood for street, you’d definitely be able to pick up on that while walking through, with the found wood panels (Mösco), plastic bags (Alberto Borea) and used tires (Ishmael Randall Weeks) cropping up in so many of the installations. How do you pick which artists will be included?

ARANDA-ALVARADO: There are really only three rules for being in “The (S) Files.” First, you have to live somewhere in the metropolitan area. The second rule is that you must never have shown before at El Museo. Lastly, you have to be of Hispanic heritage.

MILLER: Can you talk about some of the studios that you visited in preparation for the show—any that stand out in your memory?

ARANDA-ALVARADO: We went to visit Angel Otero‘s studio in Bushwick, and we could see his work in progress. When you look at his work, you think it’s a piece of fabric, but really it’s layers and layers of oil paint that he spreads on a piece of Plexi and then peels off, all at once, and re-layers over canvas. This process gives the paint a very fabric-like look because when he’s removing the paint, parts of it rip off and you can see all the colors. Oil takes so long to dry, so he’s usually working on several at a time; in the studio he had them draped over drying racks.

Another studio we visited was completely different—a great experience, but it was a tiny, tiny studio on

MILLER: Right, she made the record players, which would start spinning via motion sensor [Turntable].

ARANDA-ALVARADO: She was explaining to us how she just picks things up off the streets—old PDAs, cell phones, electronic children’s toys, etc. Using the Internet, she teaches herself how to redesign these things to do what she wants them to do.

MILLER: I was really intrigued by Sol Aramendi’s diptych. I want to know more about what’s happening in those photos—the tattooed woman ironing the piles of records in the one, and the same woman (I think) holding a bouquet of scissors, surrounded by what look like hunks of raw meat. There must be a story there!

ARANDA-ALVARADO: Her series involves portraits that develop around the personality of the sitter. When she meets someone that she thinks would make an interesting subject, she gets to know them better, and works with them to figure out what kind of objects she’ll use when she’s photographing them.

MILLER: Do you have any personal favorites in the show?

ARANDA-ALVARADO: There are two artists that are right next to each other whose work I feel really speaks to a New York Latino sensibility. One is Lisa Iglesias; she made the giant nameplate necklace out of scavenged cardboard called Always and Forever. Firelei Báez did a series of gouache paintings documenting the way her hair texture changed over time. They’re both, coincidentally, Dominican. Lisa is of Dominican and Norwegian decent, and Firelei was born on the island but has been living in New York since she was a teenager.

MILLER: Is this the first year that you’ve done off-site shows as well?

ARANDA-ALVARADO: In 2007 we collaborated with the Instituto Cervantes, because there were some Spanish artists in our show. This year we wanted to expand on that idea, especially since we didn’t have a biennial in 2009.

MILLER: Did you work with the other venues to curate their shows, or was it more like you were renting their space?

ARANDA-ALVARADO: The deal we worked out with them was that if they were willing to provide the space and help publicize the exhibition, we would come to them with a complete project. Most of these places are used to working with guest curators. We did get their input: the Rotunda Gallery was particularly interested in supporting artists from Brooklyn, since that’s part of their mission, and we were happy to go with that.

We also set up a collaboration with the New York Restoration Project, so many of the artists will be doing pieces at community gardens.

MILLER: You are also working with the Biennial of the Central American Isthmus. How did that come about?

ARANDA-ALVARADO: Around 2005, El Museo began to invite a Latin American country to send projects by their top 6-10 artists, so we’d have a featured country at the biennial. This year we thought it would be nice to include the whole Central American region, so we chose several projects from that biennial, which was initially on view in Nicaragua last winter. Really, the only way you can tell who is representing Central America is from the catalogue, because we put a little asterisk next to those artists. We wanted to incorporate them into the show at El Museo in as organic a way as way as possible, so they’re really in with their peers who are living and working in New York.

It’s amazing how much of the subject matter coincided. Here’s a perfect example: You know the giant rainbow made out of plastic bags? Straight across from that is a video of a pair of hands carefully “unwrapping” little plastic bags. Alberto Borea made the rainbow; he lives and works in New York and is originally from Peru. And the woman who made the video, Donna Conlon, is originally from Atlanta, but she lives in Panama, and her video is a perfect match to Borea’s installation.

“The (S) Files” is on view at El Museo del Barrio through Jan. 8, 2012. Check their website for information on the satellite venues.