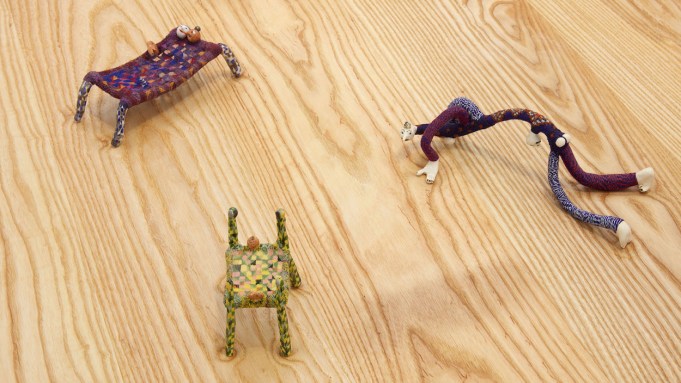 Em Kettner’s new figurative sculptures are rooted in her experience with muscular dystrophy and take up smallness and fragility in manners that are charming, fun, and decidedly not pathetic. Kettner focuses on themes like religion, sex, and the history of disabled people entertaining others with their extraordinary bodies and abilities. She manages to take on these heavy topics in a playful, almost mischievous way. Her exhibition “Slow Poke”—on view at François Ghebaly in Los Angeles through July 24—features twenty small sculptures, all from 2020 or 2021, on an eight-by-six-foot platform and ten small painted tiles embedded in the four surrounding walls. Kettner, who earned her MFA from the School of the Art Institute of Chicago in 2014 and now lives in El Cerrito, California, depicts everyday moments when we depend on objects or other people—like when having sex or simply relying on furniture for support. Below, she talks about how beds became her recurring motif, and reveals the lessons her materials have taught her.

The tiny colorful figures are crawling around, resting, or engaged in intimate embraces. Beneath their handwoven quilts and costumes, the characters merge with lovers, caregivers, or furniture supports. The Pole Climb hangs from the ceiling via a gold cord and hovers just above the plinth. Alexander Calder’s Cirque Calder [1926–31] was definitely a big influence. It’s a troupe of wire, wooden, and cloth circus performers that balance on stilts, hang from trapezes, and so on. Calder played with them in performances, but at the Whitney [Museum in New York], the figures get displayed like votive offerings placed at an altar. The word “pilgrim” comes up in a few of my works’ titles because I was thinking of the people who might travel for hundreds of miles, bringing little offerings, to request healing from a higher being. I wanted my figures not to beg for a cure but to highlight the beauty that gets forged in relationships involving prosthetics, be they physical or social.

In The Piggyback (Self-Portrait with Adam), for example, a legless figure holds the shoulders of their larger companion in a grateful embrace. Over the years, my partner and friends have carried me to places that I wouldn’t have been able to manage on my own. Sometimes, when they do, I just melt into the body beneath mine. It’s wonderful to feel yourself coursing through things around you, and that’s how some people describe sexual or religious experiences—becoming combined with something greater than yourself. I want to show that disability can be another access point to these sorts of realms.

Dependency, in our culture, is often regarded as a source of shame. But I think of it as a special kind of bonding with someone else in order to become greater together. We shouldn’t assume that a person who needs to lean on someone isn’t offering anything in return. You might read Piggyback as one person who is dependent on another to be mobile, but you might also imagine the smaller figure singing or talking to the person who’s carrying them around.

I try to create moments that encourage viewers to take their time and sit a little longer with the work, in part because these characters represent disabled people who are often overlooked or pushed to the periphery. When arranging them, I imagined a scene like a bunch of toys that a child has strewn about while enacting some really complex drama. But once you get up close, this more adult content is revealed. And, up close, one might also notice small grooves carved in the plinth and under the feet of the somewhat precarious sculptures, helping them stand up. Most people engage with the work by crouching or assuming a seated position, since the plinth is only two-and-a-half feet high. I like that these small, fragile beings prompt some viewers to change their body positions. Also, my dad is in a wheelchair, and standard viewing height is well above his line of vision, so this is always on my mind.

Some of the histories that I’m alluding to, like the freak show, are rather dark. But still, the playful colors evoke joy, as do references to certain roles that disabled people found themselves in throughout history—like being court jesters or circus performers. You might recognize some nods to those sorts of costumes. Entertainment is a really complicated, problematic part of disability history. Once freak shows fell out of fashion, it’s not like some other support system was put in place, where disabled people could find community and receive income.

That heavier history isn’t necessarily obvious in the work, as I’m aware that there’s a danger of shutting people out. In representing states of rest, confinement, and mutualism as sensual and joyful, I want to show that disability is not just something to be feared or diagnosed away. But I want to do that in a way that is relatable to many people. That’s why I keep returning to the bed: whether during birth, sex, sickness, or death, there, our sense of the body expands to encompass someone else or something else.

My background is in painting, but I’ve been teaching myself to work with ceramics and textiles. This process has taught me a lot about finding beauty in things that are easy to dismiss as mistakes! I started using the clay to make tiny frame looms, then wove across the center, creating a square bed with feet and legs. Then something poetic happened: under the tension of the weaving, sometimes the clay would break, and yet, the threads also bind the pieces back together. It was a reminder that we can think of something as being broken, or we can think of that “brokenness” as being fundamental to communal bonds.