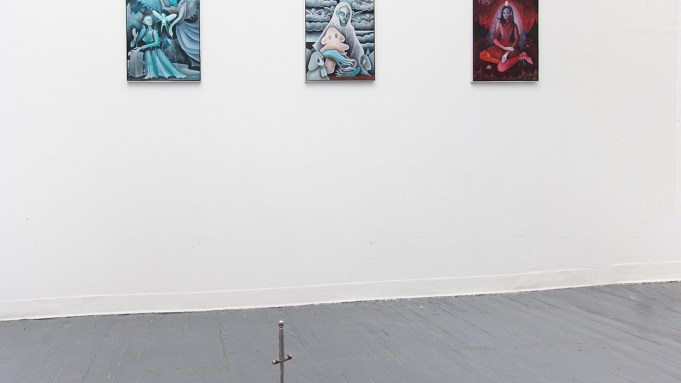 The female figures in Emma Pryde’s paintings—on view in her exhibition “Counterplayer” at King’s Leap in New York through June 13—look like crossovers between angels and aliens. They have greenish skin; spindly fingers; small chins; and, sometimes, broad wings. “Counterplayer” comprises seven 20-by-16-inch paintings (all 2021) hung in a row along three walls. On the floor in the center of the gallery sits a small sculpture: a resin lamb with a sword stuck in its back and a glowing red light in its stomach. This work is born of the Wisconsin-based artist’s jewelry and sculpture practices (she’s probably best known for her acrylic sword earrings). Continuing her interest in the aesthetics of innocence and its inevitable spoiling, Pryde turns, in “Counterplayer,” not only to a new medium, but also toward Christian symbolism. Still, the artist’s signature motifs borrowed from girlish American consumer culture—hearts and bows—crop up in her depictions of martyrs or madonnas. Below, Pryde discusses her path to painting.

All the works in this show borrow compositions from late Gothic or early Renaissance Italian paintings, work made right after the Black Death of the fourteenth century. I’ve always been obsessed with that period of art history, because you can see the work breaking away from medieval styles. Viewers can sense that the painters are trying to figure out new methods for rendering figures and depicting space.

My painting Counterplayer’s Anamnesis is inspired by Lucas Cranach’s Judith with the Head of Holofernes (ca. 1530). It shows a woman holding both a sword and a man’s decapitated head, but in my version, she’s depicted as a cowgirl alone on the frozen tundra. Throughout the show, I’ve used archetypal characters as a starting point, then I free associated. The cowgirl’s sword has a heart on the handle; her hair is adorned with bows.

I titled the show “Counterplayer”­—which refers, in computer programming or game design, to the unknown forces that attempt to overturn the rules or escape the programmer’s control—because the concept mimicked my process as well as my themes. After planning out the borrowed compositions, I allowed myself to play freely within the parameters I’d set up. There’s a lot of doubling, multiplicity, and ambiguity in the paintings, too. One gives birth to the other, who in turn gives birth to the first, for example, shows two angels I took from the background of Piero della Francesca’s Brera Madonna (1472–74). My title is a riddle posed to Oedipus in some versions of the story of Oedipus and the Sphinx, and the answer is that one of the sisters is day and the other is night. “Counterplayer” also builds on my December 2020 solo show at Mickey in Chicago, “Playset.” While “Counterplayer” takes place in circa fifteenth-century Italy, “Playset” takes place in America in and around the 1990s.

I was a painter as an undergrad, but I haven’t painted in the six years since, until now. Returning to the medium, I decided to stick to traditional techniques, applying oil onto panel in thin layers and using a pretty limited color palette—mostly grays and browns, sometimes with pastel peach or aqua accents. Except for in the sole red painting, Extreme Temperatures, which shows a woman surrounded by an alizarin crimson landscape. Red is usually associated with heat, anger, or passion, but I wanted to try and use it to create a really cold, almost lonely feeling. It also brings some contrast to the show, making the blues in the other paintings feel more blue.

Nine Doors is my painting of Lucretia, whose rape and subsequent suicide is said to have catalyzed the rebellion that overthrew the Roman monarchy before it became a republic. Lucretia is an interesting counterplayer; for me, she represents the idea that one event can inspire another that, in turn, causes dramatic change, beyond prescribed rules. The title is taken from something that the surrealist painter Leonora Carrington said to the filmmaker Alejandro Jodorowsky: “I am nine doors. I shall open the one on which you knock.”

In a sense, my jewelry making practice led me to the lamb sculpture in the center of the show. Though before that, it was sculpture that brought me to jewelry. A few years ago, I was making these large, laser-cut acrylic works, and I didn’t want to waste any of the material. So I cut little shapes out of the excess and started putting them on earrings. People became interested in them, especially in the dangling swords, so I started making more of those. When the pandemic hit, I no longer had access to a laser cutter, so I started casting small swords in resin. Getting back into mold-making and casting led me to a lot of the works in “Playset,” and then, to the resin lamb—The More Innocence You Have the More Violence You Constellate (2021).

“Playset” considered the myth of innocence as it’s captured in everyday items—trellises, doll houses, bows. There were also two pieces—Millennium Fence (2020) and Aspirational Lamb Gate (2020)—that I made using these porcelain molds that were popular among crafty Midwestern women in the 1980s. The resulting sculptures of eggs, lambs, bunnies, apples, and childish human figures look almost like those Precious Moments figurines that have big, sad eyes, or like small plush toys. If you look closely, you’ll notice a lot of my characters’ pants are falling down, and that several look coyly over their shoulders. I cast a bunch of these then affixed them to white garden fences. Some have graffiti on them, inspired by the sort of things kids write on school desks, which are not always so sweet.