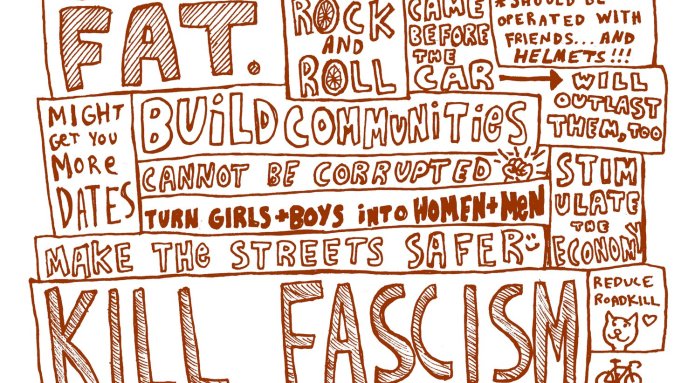 Departing from Brooklyn on Sept. 5, 2010, artist Eric Clausen embarked on “Drawing America by Bike,” a yearlong journey back and forth across the country during which he draws all the way. “I want to meet Americans, see how they’re doing in this recession and draw their picture,” he wrote on his blog, where he posts artwork and updates in the form of photos and anecdotes from his trip.

In addition to the scrappy cast of characters he’s met on the road, Clausen’s drawings feature  himself, the landscape, fauna and his traveling equipment. When he’s writing about himself, his tone is deadpan and self-effacing. When he describes the various ways people have improvised to get by in a down economy, like Dumpster-diving, planting gardens and living in improvised shacks, a quiet affection sneaks in, resulting in a sympathetic portrait of a nation that, he points out, is often described as being at war with itself.

Clausen cycles six to nine hours a day, covering between 75 and 100 miles. An unsolicited postcard sent to A.i.A. in April 2011 from Fresno, Calif., bore instructions on how to create “the hobo stove,” suggesting the unglamorous life Clausen is leading. But he keeps his sense of humor about him. A.i.A. traded emails with the artist while he was in Chicago.

BRIAN BOUCHER: What was the genesis of this project?

ERIC CLAUSEN: Well, it’s kind of complicated, but not really. I couldn’t find steady work. It’s not an uncommon situation. If you graduated with some kind of art degree recently [Clausen got an MFA from the Mason Gross School of Arts at Rutgers University in 2009], you quickly notice there are not a lot of paid opportunities in New York. It’s a fun, tough, expensive and competitive city and not totally ideal for young artists just starting out. After a year of scouring Craigslist for temp work/odd jobs, working for a couple non-profits that couldn’t pay me, and a bad bicycle accident (without health insurance), I realized life there wasn’t totally sustainable. I was depressed, drinking quite a bit and never really shook off the stress from grad school. I wanted to leave, but didn’t have anywhere to go.

Because I moved a lot growing up, I don’t really have a “hometown.” I had the burden and liberty of having no place to fall back on. I thought I would be more of a bum and just wander around, selling drawings and picking up work wherever. But we have the Internet. So I made a blog and got rid of everything so I could hit the road. I didn’t want to get rid of my bike, so it became the logical vehicle for my journey. It’s cheap, reliable and easy to fix. I commuted about 30–40 miles a day easily around New York, so a cross-country journey wasn’t inconceivable. Plus, it turns out, tons of people do this kind of thing all time, which is good news for me because I hate exercising. I love traveling, though.

BOUCHER: How are you funding this operation?

CLAUSEN: If people send me $5, I send them a postcard drawing from the road. I sell some T-shirts and comics, too, and have done a couple Kickstarter campaigns to raise money. Life on the road is cheap—I’ve just gotta pay for food, bike parts and my phone bill, since I either sleep outside or use resources like couchsurfing.org to find places to stay.

BOUCHER: One of the T-shirts you’re selling at zazzle.com, hilariously, depicts an American flag with the stars replaced by the words “We love the T.V.” That’s a pretty dark view of the country. Has your view of America and Americans changed since you’ve been on the road?

CLAUSEN: I don’t think I have a dark view, but I believe that humility isn’t unpatriotic and that we’re all drunk on media. I was at odds with how I felt about our country and the people in it. I wanted more information.

This journey around America has renewed my belief in Americans’ capacity for empathy. No matter where I’ve gone and who I’ve talked to, face to face, people can act civilized and respect one another and each other’s viewpoints. The media portrays a war going on in America, but blaming the media for the polarization is pointless. Polarization isn’t some masterminded conspiracy. It’s a by-product of the free market of information. Media outlets have to compete. They know their niche audiences and deliver exciting narratives that validate viewers. Would you blame the Food Network for having too many cooking shows? I think opportunities for empathy are missing, and by that I don’t mean those tear-jerking human-interest stories but real venues for sharing different viewpoints objectively. I don’t know what that solution is, but you can’t empathize with a sound bite. For now, “We Like the T.V.” or Internet or whatever, and that’s kind of a problem.

BOUCHER: So, what happens at the end of this trip, next month? Back to Brooklyn?

CLAUSEN: In October-ish, the journey will “end” back in New York. I’m working on a graphic novel about my adventures/observations, so I’d like to be stationary for a little while. Looking for a job or residency or something right now. I’ll be around, though exactly where is still being ironed out. But if nothing works out, I guess I’m staying on my bike.

BOUCHER: Right now you’re supporting yourself on your art, right? Aren’t you living the dream?

CLAUSEN: Yeah, living off my art, seeing the country. I just have to ride my bike and draw pictures. It is the dream . . . did I mention I sleep outside? There are drawbacks, but it’s mostly amazing.