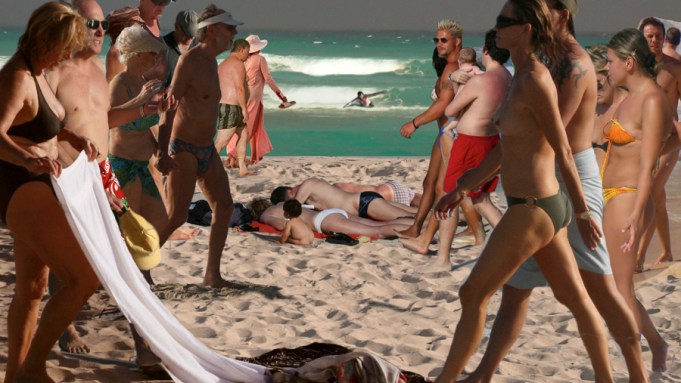 Passing through Southampton where traffic is snarled by yet another summer event, I arrive in the quieter Sag Harbor to catch up with Eric Fischl in the Arts and Crafts-style contemporary home he shares with his wife of 37 years, painter April Gornik. He’s just helped her move a mammoth canvas in her studio, which matches his exactly. Their identical spaces sit side by side, with wide open views of lush gardens. The artists have inhabited this idyllic setting full-time since 2009, when they left Manhattan following a studio fire.

Born in New York City in 1948, Fischl endured a childhood in the Long Island suburbs. He graduated from California Institute of the Arts (CalArts) with, according to the artist, “no real ability as a painter” due to the school’s focus on abstraction and conceptual art. But his self-taught figurative approach, applied to portray the dysfunctional family dynamics and tabooed sexuality of the American suburban experience, soon catapulted Fischl to fame. In 1981, his large-scale canvas Bad Boy, featuring an adolescent male watching a nude woman-her legs wide open, his hand secretly scavenging her purse-caught the attention of critics across the globe, who in turn coined him the “bad boy” of the art world for his blunt representation of psychosexual subject matter, with a focus on adolescence.

“Dive Deep: Eric Fischl and the Process of Painting” is currently on view at the Pennsylvania Academy of the Fine Arts through Sept. 30, and travels to San Jose Museum of Art [Oct. 27-May 12]. Showcasing 14 major paintings from 1979 to the present, each accompanied by related studies in various mediums, the exhibition illustrates the artist’s creative, as well as technical, processes. While Fischl’s painting style has not changed dramatically over the years, his compositional process has primarily moved from the canvas to the computer, in addition to a reliance on drawings, oil sketches, photographs, prints and clay maquettes.

A.i.A. spoke with Fischl about the ’80s and beyond.

AMY ABRAMS You mentioned to me that you first began painting in Arizona. How did you come to study art, specifically painting?

ERIC FISCHL It happened by accident. I signed up for art classes at a junior college in Phoenix to meet girls. And I’d already flunked out of college, so I didn’t want to fail at it again. With art, if you’re bad, they just feel sorry for you and give you a “C.” But it didn’t take me long to bite deep into that apple.

ABRAMS In what ways did art engage you?

FISCHL It was the first time I could concentrate. I never could throughout all of my schooling, and then suddenly, here I am for hours digging around in whatever this thing is. And I wasn’t afraid to be alone. I felt integrated. This activity, this concentration, this fascination, this speed at which my mind was flowing-I was so enveloped. I was home. Even if I was crappy at it, I was going to do it for the rest of my life. It seemed like it was my life. It’s how I was able to [ok?] connect. I was 20-late for most artists. It was an odd awakening, but it was an awakening. So, it became a matter of how to develop as an artist; that takes a lot longer.

ABRAMS With 40-plus years of art-making behind you, what skills have you honed? How have you grown as an artist?

FISCHL Well, I wanted to get better [Laughs.] My goal was to make a painting with an ease and grace about it, so the viewer wouldn’t get hung up on certain elements like, “He had a lot of trouble figuring out that dog.” It’s similar to an acrobat, when the trick is done over and over ‘til muscle memory develops and it looks easy to everyone else. I want it to look simple, so the focus is on the narrative.

Of course, art is about developing sensitivity and articulation. It took me a long time to realize I was better at relating what I know versus what I imagine. So, I wasn’t a very good abstract painter, for example, which I tried for a while. Then, when I attempted figuration and narrative, I tried very hard to keep it away from my specific background including reference to class, etc. Then, I took that to a point when specific narrative came in-what I did know—growing up in the suburbs, in a dysfunctional family, within an upper-middle-class environment. Yet, I didn’t possess even a flicker of my authentic self until five years out of college. First, I had to find the truth in myself before I exposed it to others.

ABRAMS Let’s talk about your childhood in the suburbs and how it impacted, and then defined, your work.

FISCHL Growing up, I had to develop a finely tuned antenna to ascertain the truth. The dysfunction behind freshly painted doors across perfectly manicured lawns mocked my feelings of chaos beneath. I was trained by circumstance to be hyper-vigilant. Would everything be OK? Was I safe? I looked hard for clues apart from what was said. I paid close attention to body language—to gesture. Subtle motion reveals all kinds of things. Tensions held in the body are disclosed through shifting weight, turning, twisting. I see a lot and I try to capture it in paint.

ABRAMS Yet, you seem to have compassion for the characters you paint. The figures are vulnerable—their veils removed—however, you expose them in ways that elicit endearment. Especially when the painting is from the point of view of the adolescent, there seems compassion for the various cast of characters portrayed.

FISCHL That’s funny. I was accused, early on in my career, of not having compassion and that observation surprised me. Even if I am judgmental when I start a painting, I’ve relinquished that judgment by the time the painting’s finished. It’s a process of understanding something new. In my early work, there was a lot of anger, but transformed into something else…if not compassion, a surrender to passive objectivity.

That part of the process of painting saved my life. It reconnected me in a positive way versus a destructive or self-destructive way.

ABRAMS Which people were hardest to paint with compassion?

FISCHL Well, it wouldn’t be a person, but a character—a type of woman. In many cases, it would be the experience of my mother. My job as an artist is to put all of myself into the process to find out about myself. The success of a painting is determined by how moved I am. So, in the process, I would be back to my mother, but it doesn’t mean the actual painting is back to my mother. I’ve removed myself enough for others to see their own mothers in it.

ABRAMS Let’s talk about the narrative aspect of your paintings. The process—illustrated in your current show—seems similar to fiction writing with elements of character, setting, tone and point of view.

FISCHL I start with the loosest of ideas-not even an idea-just a figure or an object. Then, I want to contextualize it, so a series of questions unfold. I’ll use Bad Boy as an example, which I painted in 1981, not because it launched my career, but because it taught me about my own process. I began just painting a bowl of fruit-then, went on to construct the room around it and figure out who might be in that room. People came and went. The 12-year-old boy stealing money from the purse was, at first, a baby next to the woman in bed. Then he became a 5-year-old on the bed’s edge staring out the window. The process was one of following intuition to obtain clarity.

ABRAMS Some artists claim to create only for themselves. You seem generous with the viewer. Are you intent on sharing your experience?

FISCHL I’ve had heated discussions with artist friends who won’t play to an audience. I’m not trying to please an audience but I am interested in sharing. There are actually two audiences. The first one helps you be a better artist. The primary audience is the painting itself, the quality of resistance that the painting gives you-not only through the stubbornness of materials to bend to my will, but also the voices in my head telling me what to do: the scolding parent, the dismissive critic, the intimidating art hero helping me decide if the edge of the shirt should be softer or crisper, if a gesture should be quick or a slower form. These experiences determine the quality of my work—and the ones that are most abstract. I have something to follow. A voice says, “Wow.” A voice says, “What a fuck up.”

The second audience just comes to watch—like at a tennis match, but they want to see a great painting. If you don’t deliver, they’ll go elsewhere. You can’t rely on them.

ABRAMS Who’s in there? Who are the voices?

FISCHL Mom, Dad, my gym teacher from sixth grade, a chorus of critics, the deconstructionists who would argue against what I do.

ABRAMS Tell me about the early days of your career and gaining notoriety in the art world.

FISCHL I admit I was ambitious. That quality was in me, in my peers. We wanted to impact the art world and sit at the table with the greats and my early stuff, the largely suburban psychosexual dramas, the “bad boy” paintings, brought me fame and a reputation. What happened in the ’80s, the art world hadn’t yet seen. It was both unanticipated and unprecedented. The art world was predominantly New York-centric. Singular movements with total dominance had a finite lifespan—Abstraction, Pop art, etc. Then, the floodgates opened to make way for this rapid expansion. There was unheard of pluralism. Previously, so many had been marginalized through their identity and race. Now, there were all different ways to assert domination. Ultimately, painting lost a lot to conceptual art.

ABRAMS How did attention from the media at your career’s onset shape your work?

FISCHL At the time, the top art magazines had a 6-month lead-time, but news was happening faster than that, so artists were thrown into the dailies on Page Six with the celebs and the next thing you know, we are rock stars. Spectators entered the scene. People tried to predict, then affect trends. What we had was market manipulation. It was unrecognizable to my generation. The next generation understood that art was a business. I gave a talk at Yale in the mid-’80s. There were almost exclusively business questions from the students, about contracts with dealers and who pays for framing.

I wasn’t very good at stardom. I couldn’t remember peoples’ names. I didn’t know this person was a supermodel. I wasn’t cool. I remember living in Haight-Ashbury during the Summer of Love, trying to dress like a hippie, which I desperately wanted to be, but looking like an undercover agent. I was also terrified that fame might destroy my real work.

ABRAMS What are you working on now?

FISCHL Sculptures inspired by the photographs of German filmmaker/photographer Leni Riefenstahl, and I’ve decided to go forward with editions of this glass sculpture. It’s my first piece in glass. I’ve been living with it for a few years. I like the way the light plays with it throughout the day.