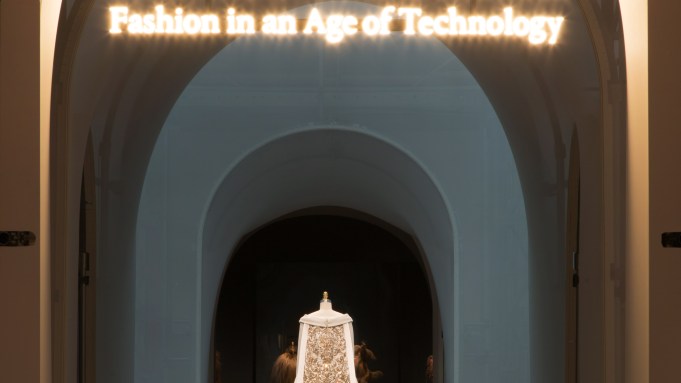 “How many slaves did it take to make that?” It was a Wednesday afternoon in early May, and K8 Hardy and I had just entered “Manus x Machina: Fashion in an Age of Technology” at the Metropolitan Museum of Art in New York (on view through Aug. 14). We were confronted by the ostensible centerpiece of the show—a recent Karl Lagerfeld design for Chanel, a queenly wedding ensemble, its long train embroidered with thousands of gold beads. “When I see so much handiwork, it really stresses me out,” she continued. “I just think of all the women sewing with tiny little needles forever and ever.”

Hardy, a Brooklyn-based artist whose sculptures and photo projects often engage her interest in style, recently released her first feature film, Outfitumentary (2016), a chronicle of her outfits that looks like a vlog, though she started it eleven years ago, before the advent of video diaries. The informal documentary evinces her evolving gender identities and personae, but more than that it’s a fun and highly relatable ode to choosing outfits. Hardy has a background as a stylist in the fashion industry and she referenced personal experiences working with designers represented in the exhibition throughout our tour. “I don’t know if it was a background or just a little spree, trying to get by and do fun freelance work but, yeah, I have been witness to many fashion shoots,” she said. Hardy made a subversive, thrift-store entrance into fashion in her hometown of Fort Worth, Texas. “I got kicked out of high school one day,” she mentioned, “for having a Born Against T-shirt with a soldier saluting a coffin that said, ‘I pledge allegiance to shit.’”

That background seemed worlds away from the haute-couture fashions displayed in the Met’s blockbuster, organized by the Costume Institute. Showcasing over 170 ensembles spanning from the twentieth century to today that exemplify achievements in technology and craftsmanship, the exhibition is structured in sections based on material or technique, including toiles, pleating and folding, lacework and leatherwork, embroidery, feathers, and artificial flowers.

As we walked through the winding scrims that have transformed the Lehman wing into an ethereal atelier-like showroom, Hardy expressed her primary concerns with the show, namely women’s labor and the female body. “These look like dresses for children,” she said, standing before impossibly tight-hipped designs by Dior from the 1950s. “I don’t know how a woman-person fits into them.” She’s critical of the fashion industry at large, but has a great passion for personal style. “Where I grew up, you could really make a statement by how you dressed and you could really upset people.” Unconventional outfits by younger avant-garde designers like Belgian Iris van Herpen, whose high-tech, sculptural dresses were a standout, excited her most. A hand-painted mini dress from 2013 coated in gray and purple polyurethane resin and iron fillings, for example, was hand-sculpted with magnets. “Neon Dans la Nuit,” a digital-looking skirt suit with optical neon green stitching by Thierry Mugler from the early ’90s elicited awe at the technology of textiles, rather than machines. “To have planned the embroidery lines on that without a computer is incredible. It has a very hand-sewn, futuristic look. I like that.”

Like many viewers, we couldn’t help but think of the exhibition as an extravagant shopping spree, pointing out the clothes that we would like to wear. We imagined slightly different cuts, creating our own dream outfits. We soon turned to find ourselves in the sequin section of the exhibition. As we stood before an elaborate 2015 dress with daring cutouts by Proenza Schouler, Hardy remarked that the clothes on view cost more than her artworks. “I love Proenza, but it’s true luxury,” she said. “They have great textiles. I like the cut. Except for the neck.”

Sequins frequently reappeared throughout the show, especially in the embroidery section. The patterns and iridescence of many dresses recalled the scales of tropical fish. A truly aquatic 2012 creation by Sarah Burton for Alexander McQueen left Hardy aghast at what appear to be twisting coral branches covering the garment. “That’s an environmental disaster right there. The shape is incredible but that much coral?” she said. “Put it back in the ocean, seriously.” I agreed, but later found out that much of the dress is made of pink-dyed shells.

As we entered the feathers section, which includes some of the most fabulous pieces in the show, she breathed a sigh of relief. “I feel a little bit better about feathers because I think, ‘Oh, maybe the animal didn’t die, you know. They just plucked it a million times.’” She was particularly taken by forward-looking Balenciaga and Givenchy designs from the 1960s. The section opened with a pair of Gareth Pugh dresses made entirely from drinking straws cut and attached by hand, producing a surprisingly featherlike effect. Hardy is a Pugh fan, and recalls working with him when she was styling videos for the electronic music duo Fischerspooner and he was an up-and-coming designer making their costumes.

Japanese designer Issey Miyake is amply represented in the pleats section with a selection of origami-inspired dresses displayed in various folded states. Hardy was impressed by a dress he created from recycled bottles. She’s interested in sustainability: “That’s the direction fashion should go,” she said. But she also reveres textiles often considered in bad taste. “I love polyester,” she said at one point. “That’s really one of the greatest technologies.” Though she complained about expense, Hardy was equally put off by the thought of the dirt-cheap clothes sold at mass-market retailers like Wal-Mart, where she once found a pair of jeans for seven dollars. “If you do all the math in your head—producing the cotton, the dying, the construction, and the shipping,” she said, “you have to wonder: how did all of these things get made?”

By the end of the exhibition, Hardy found herself dissatisfied with the show’s prioritizing of one particular ideal and its inattention to other sorts of social innovations in women’s dress. To her, the show is “the epitome of a lot of women’s fashion fantasy”—the special wedding-day moment when a woman is the most beautiful one in the room. Hardy noticed that there are no pants in the show. And “where’s the development for the waist to expand and contract?” she grumbled. “You can’t really stay the same size even within one month of time.”

I wondered if she had ever had this kind of fantasy herself—the Cinderella moment. “No, I’m Cinderella every day,” she laughed. “That’s about getting the right invitation. I like getting dressed up and going out. I like being seen. But a lot of the dresses in this show represent this ultra-feminine ideal. You could see some of the more modern designers messing with that, like Pugh and van Herpen and Miyake.”

She found a silver lining in this narrative, though. “Historically,” she mused, “these were powerful moments for women to express themselves, even if it had to be at a ball or at her wedding—they’re moments when women had a voice.”