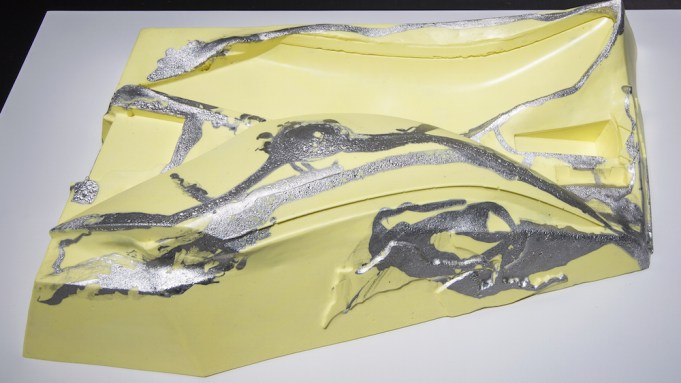 Los Angeles-based artist Leslie Shows opens a large solo exhibition, curated by Hesse McGraw, this Saturday at the San Francisco Art Institute’s Walter and McBean Galleries. The show, which runs through Dec. 12, includes several newly commissioned paintings that extend the artist’s research into geological timescales, industrial processes, hybrid materials and abstraction. Her striking paintings use natural and manmade materials such as sand, Mylar and aluminum to construct dense, three-dimensional landscapes or stratum. In some instances, this exploration has extended into sculptures. Shows spoke with A.i.A. about the ideas, philosophical and otherwise, that inform her unique approach to painting.

CECI MOSS  The ambitious layering of materials, from ground glass to aluminum, give your often large paintings a dramatic textural dimensionality. You’ve described them as “hardenings or crystallizations of thought in time.” Can you discuss the temporal logic at play in your work?

LESLIE SHOWS  My work has always circled a kind of three-way metaphor, linking earth processes with thought and painting processes. A reference point would be Robert Smithson’s 1968 essay “A Sedimentation of the Mind,” which describes how “one’s mind and the earth are in a constant state of erosion. . . .brain waves undermine cliffs of thought, ideas decompose into stones of unknowing. . .” With abstract painting, decisions—whether they’re impulsive and provisional or built up through a kind of accretive inner logic—are made in a sequence in time, but become “set in stone,” as it were, and then exist all together simultaneously. It makes  me think of a landscape feature, like the Matterhorn—the silhouette becomes iconic, symbolic, maybe even approaches Pop. The landscape was formed not by chance, but by a set of unintentional conditions, forces and tendencies, and is solidified further through human language.

Metaphorical thinking, synesthetic or connective thinking, can be almost impossibly layered, ephemeral, complex, like transparent mental overlays making “chords” of thought. The layered-ness seems as interesting as whatever content might be rolling through, which is my approach with the paintings. Mental impressions can seem impossible to articulate, but an object that is analogous can be made, pinning the impressions down in the physical world. It can be very concrete and textural, while also having an elusive, illusory quality.

MOSS  In a way these layers act as a filter that captures your thoughts over time. So, it’s less about a singular flat representation than fluctuation and flow.

SHOWS  I work two-dimensionally because I love the illusionism of painting, the great historical example being oil paint as flesh. I like the promiscuity of materials masquerading as other materials while being on full display as themselves. I’m using cracked and cut plexiglass; smears of clear synthetic rubber; soft, fluid pours and bleeds of color; printing on sand affixed to aluminum honeycomb panels, engraving into the panels, etc. In my work the materials continually slip in and out of their representational capacities. Qualities like translucence, reflectivity, illusion, roughness, crystallinity, fluidity—they are a useful vocabulary for making work that is at least adjacent to the flows and hardenings of thought.

MOSS  You’re particularly attentive to the movement and transformation of your artistic materials by different forces—industrial, ecological or otherwise. For example, your recent sulfur sculptures, such as Cantra (2013), reference the injection molds used in commercial production. In order to create Cantra, you made an object that looks like the mold for a car headlight, then made a mold from that object, which was then used to cast another, final object. The work goes back and forth between positive and negative forms without a consistent original. But there’s also a philosophical gesture here, in that the sculpture is a product of a vacillation between presence and absence. What are your thoughts on this complex process?

SHOWS  There’s always a philosophical dimension in my work, contending with basic, almost elemental questions, like the fact that there appears to be something instead of nothing.

Cantra was part of a series based on industrial and sculptural molds, which looked to me like anatomies with channels, male and female parts, layers of different materials for specific purposes. The molds are the thing other than the desired or focal object—a surrounding peripheral space that has an ordered system. In the finished works, the traces of systems are cryptic and the figure-ground relationship continually flip-flops. The works try to address orders that seem beyond reach, that incorporate chaos and organization without intentionality.

Cantra has a poured metal alloy embedded in the cast sulfur that complicates the curves and angles of the headlight forms. It seems very much like a drawing or painting even though it’s a sculpture. I’ve worked with sulfur a lot as a material and I’ve also represented it visually by using metal flake or small bags of pigment in some of my earlier paintings. Much like the yellow in McDonald’s trademark arches, sulfur yellow is quite specific. I wanted to engage with the actual material, understand it haptically and incorporate it into my vocabulary, where it could exist as itself with its color and odor, while also alluding to sulfur’s industrial value and cultural associations.

MOSS  The new works for the SFAI exhibition are described as “sculptural paintings.” It seems like this is an intuitive progression of your research.

SHOWS  I wanted to make a group of paintings that was like a score or a choreography of their own existence through the lens of the metaphors of earth/thought/painting processes. I started with a scanned image of a mineral within my collection, a few doodle drawings, and some pours of liquid paint. In a sense the mineral, doodles and paint pours all constituted types of relatively unintentional drawing, and I cut, collaged and layered them to compose a sequence of discretely shaped works that kind of flow toward or reach for each other.

The paintings allude to spans of time. The references include flows of lava, forms buried in sand, a cutting tool carved from the mineral image, and a knife form that is marbled like a keris or Damascus blade. The paintings engage in a restless mimicry of each other. For example, a scanner glitch in a print on sand gets hand-rendered again in translucent acrylic gel and draped over plexiglass, which is cut in the form of doodles and edged in black sand. Certain doodles make repeat appearances, becoming motifs. Two of the painting shapes seem to partially rhyme with each other, and between them they make another negative shape on the wall.

There is a suggestion of narrative and visual traversing, like a scroll painting, moving through time and encountering a field of details and intensities. I barely read fiction, but I’ve been reading about diagrams and structures of narrative. I recently read Euripides’s Bacchae, and there’s a lot of reflexive doubling in that play. Actors play characters in disguise, who see double or see sustained illusions, and this refers back to the nature of theater itself.

The paintings don’t present a cohesive narrative but they allude to parts and elements of one. The glyph-like shapes and blades or tools are like agents or actors, and there are traces of actions, like cuts and fractures, paint pours and gestural marks.

MOSS  How does this effect of doubling inform how these works are read?

SHOWS  Doubling and reflection showed up even in my previous works that had more recognizable landscape formats. Someone once asked me where the human-ness was in my paintings, and I think I always associated doubling and mirroring with reflective self-consciousness, which seems quite human.

In this new work the imagery is abstract, yet it often seems photographic. It creates a kind of disorientation: optically it appears to be very specific and sharp, but there’s an experience of suspension where it doesn’t resolve into something readily explainable. The images may look like letters or glyphs, a pair of eyes, aerial maps, or a heart dripping blue tears. Maybe in the suspension of immediate understanding there is a space for other kinds of knowing—open-ended, associative and sensory, and a kind of aliveness or electricity there. In this kind of abstraction there is a close proximity to meaning and language that isn’t quite available to provide closure. It just keeps suggesting.

Louis Vuitton Is About to Drop a Bold, Updated Take on Its Empreinte Jewelry Collection

You Can’t Burn Down the Office, But You Can Buy the Iconic Red Swingline Stapler from Office Space