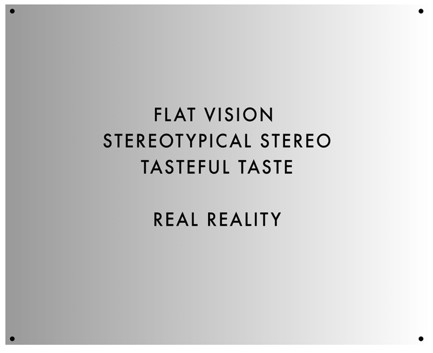 Taking equal inspiration from critical studies and Twitter, Fia Backström’s work engages methods of display to raise large questions about form, politics and rhetorics. Living and working between Stockholm and New York, the artist’s work spans media, including but not limited to: arrangements of images and texts, objects, environments, printed matter, performances, and discursive content such as essays and interviews with other artists published in various art journals. Through short, cryptic poems printed on aluminum, Backström’s current exhibition at Murray Guy uses various rhetorical modes familiar from contemporary media. Art in America met the artist in Chelsea, initiating a dialog that would unfold over email. The following offers a condensed version of the conversation.

BERIN GOLONU: Your current show at Murray Guy in New York is titled “Social Ambien® Support—five ways of authenticating address.” You’ve hung aluminum plaques on the walls inscribed with verse in a repeated system. My favorite one reads:

Do you conceive of the phrases as poems? Haikus?

FIA BACKSTROM: Digital media has compressed social exchange into brief statements. Tweets on Twitter are limited to 140 characters. On Facebook, a short catchy style has developed for updating one’s status. It is remarkable how willingly we fill in the field that asks: “What’s on your mind?” It’s a question that would be met with suspicion in any totalitarian regime. The three line structure takes its cue from the chronically dialectic ad campaigns of HSBC bank. The fourth line seemingly offers release, while understanding is another cup of tea.

GOLONU: If meaning is left undefined, what is the role of the reader or viewer?

BACKSTROM: I am interested in the way language addresses us physically. How do we make sense of it as voting consumers? Our associative capacities are constantly exploited in order for purchases to take place. These semantic graveyards can be activated anytime. Instead of that detached smooth feeling, through an irrational or absurdist approach to language, uncomfortable laughter may land in the body and foreground the activity of interpretation.

GOLONU: As social beings, we follow society’s rules, which are structured by language. Is there something reassuring about being addressed as a subject, and entering a field of extisting interrelations?

BACKSTROM: In commercial address, shifters such as “you,” “we” or “I” are used to set up the community of consumers, and to ease identification with the product. The plaques avoid shifters and thus preclude this bond. One important aspect of language—when used to reinforce community is precisely breaking the rules, and of course poetry doesn’t have to produce “sense” in the Chicago Manual of Style way.

GOLONU: Your work often includes that of other people, or found content like stock images. Your current show takes up half of Murray Guy; the other half, relatively undifferentiated form yours, is show of work by Christian Philipp Müller. In your view, is it possible to get away from authorial signature?

BACKSTROM: Authorship is a way of staking property and of course to bring about accountability. Signature style is key for commodification and branding. The question is: what kind of subjectivity is being produced? How can one retain freedom within one’s practice, beyond cliché or marketable identity politics?

For this exhibition, I invited painter Blake Rayne to de-contextualize his practice and afflict my work with his disembodied brushstrokes. No content was imported. After days of conversation, we kept bumping up against questions about what kind of agency there was for him in the context of my work. My method allows  co-existence in relation to authorship and surface. It is the most truthful way I can offer up.

GOLONU: You often complicate conditions of the sale of your work. How do you split the sale proceeds when you include works by other artists in your environments?

BACKSTROM: Each structure is a form of co-authorship. Getty images—to use a contemporary example —pays a use fee each time an image is licensed for specific usage. The capitalistic impulse is to increase the value of your product through available parameters—the discursive system around the work, the social affiliations, or apparent uniqueness. With additional authors hooked into the work, the circulation of the work within a commercial system gets complicated, and perhaps value shoots off in a different direction.

There’s a printed banner in my installation, Hours Ago, comprising a jumbled Facebook interface. The empty fields (invitations to post) may seem like a co-authored space, but remember it is not a collaboration. There is a proprietary inequality between the frame and our position as content producers. Facebook owns the content on its site, and we have no rights over that frame’s articulation.

GOLONU: I’m curious about your choice of images in this installation. They are each recognizable, yet efforts to attribute meaning to them are rather slippery.

BACKSTROM: Stock, Googled and self-shot images are printed on both sides of aluminum plates, where the negative spaces in the images reflect the metal. Hung on human size aluminum stands, they can physically be rotated like blinds, hiding and revealing simultaneously. Each image reflects a part of the abstracted visual in visual culture, such as contemporary shiny architecture, the ash cloud, a scruffy aluminum keyboard, and camera flashes in press conferences for public apologies from CEOs and talk-show hosts. The images formally form a super-image, an abstraction of an abstraction, where obfuscation of vision becomes material.

GOLONU: You extended the architectural detailing of the gallery space into your work. How does the built environment fit into the manner in which the text and images function?

BACKSTROM: The antique white, wainscoted structure parrots the pre-existing wood wainscoting under the windows in the gallery. The windows face a housing project in the center of Chelsea. Most likely the neighborhood entertainment offerings are unaffordable to its inhabitants. Those of us who live in Brooklyn have seen the gentrification frontier embodied in the use of 19th Century tropes and decors in the construction of new bars and restaurants, as if they were always there. The tools of history and nostalgia legitimize and naturalize these territorial claims, not dissimilar from how nations build a coherent narrative. Interior decoration magazines have termed it “Brooklyn barn aesthetic,” which really gives “cutting-edge” a new meaning.

GOLONU: Can you say something about your upcoming commission for the Swedish Pavilion of the Venice Biennial?

BACKSTROM: The challenge is national representation, with its deposit of “correct identities.” In 2006, through the unofficial invitation from artists, I was able to insert a series of tablecloths as social and textual surfaces into gallery spaces. The patterns consisted solely of the galleries’ logos, rather than my own gestural subjectivity. If colonialism is living as an image for somebody else, the logos we wear belong to and signify the corporation. How can one think territory, visual representation and solidarity across other channels?

What to Watch in July: ‘Terminal List,’ ‘The Rehearsal’ and Ryan Gosling’s ‘The Gray Man’