London-based duo Cooking Sections, who define themselves as “spatial practitioners,” have used food as a vehicle to explore the complex systems that sustain our biological existence. Food Studies: A Conversation with Cooking Sections – ARTnews.com
Skip to main content 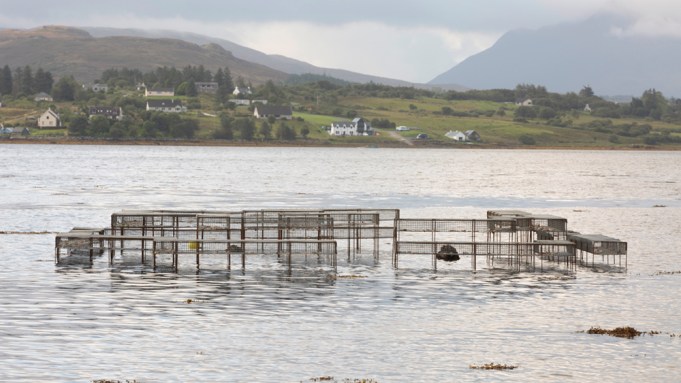 Are we what we eat? Consuming something even as simple as a raisin means participating in a wealth of geopolitical, environmental, and economic exchanges. Since 2012, the London-based duo Cooking Sections, who define themselves as “spatial practitioners,” have used food as a vehicle to explore the complex systems that sustain our biological existence. Daniel Fernández Pascual, whose background is in architecture and urban design, and Alon Schwabe, who began in theater and performance, met while studying at the Centre for Research Architecture at Goldsmiths College, University of London. They are taking part in the twelfth edition of Manifesta in Palermo, whose theme—“The Planetary Garden. Cultivating Coexistence”—could not be better suited to their research-based practice.

Their multipronged ongoing project “Climavore” (2015-)—a title that plays on the term “locavore,” someone who eats primarily locally grown produce—envisages alternative patterns of food production and consumption beyond consideration of seasons, which they see as obsolete in an age of intensive farming and hyperfertilization. Instead, “Climavore,” in its various manifestations, proposes eating in a way that addresses anthropogenic changes in the landscape, through site-specific meals featuring dishes such as “tidal crispbread” and “drought salad” that use ingredients aimed at regenerating specific geographies, from deserts to flood-prone coastal plains. One such meal was Under the Sea There is a Hole (2015). It was first served at Q21 freiraum in Vienna on an installation of suspended boards carved with holes, drawing attention to sinkholes that are devouring the Dead Sea; guests had to navigate the precarious surfaces in order to eat.

Cooking Sections participated in Documenta 13, the 2017 Sharjah Biennial, and the 2014 Venice Architecture Biennale as part of the US Pavilion. They recently launched their book The Empire Remains Shop, which evolved from the eponymous performance space in London that they ran for three months in 2016, inviting collaborators to join them in investigating the traces of British imperial power structures. As part of the project, the artists offered “consultations” on the history of “invasive” plant species, focusing in particular on Japanese knotweed, a fast-growing plant that some homeowners fear could devalue their properties, especially in the wake of media scaremongering. In these tongue-in-cheek performances, Cooking Sections noted that nineteenth-century British landowners in the nineteenth century actually introduced foreign plant and animal species such as Japanese knotweed, rhododendrons, mandarin ducks, and Canadian geese onto their estates to make them more exotic. The artists created an ice-cream flavor called “The Plant That Ate Britain” from Japanese knotweed, and at their book launch they offered delicious cocktails made from this botanical invader. The Empire Remains Shop invites readers, through an agreement wrapped around its cover, to open franchises of the shop and thereby “rework asymmetries of power and reroute the production, consumption, and distribution of those proteins, carbohydrates, vitamins, and minerals that organize the world we live in.” continue their mission of challenging inequities of global power and subverting neoliberal entrepreneurship. I caught up with the artists on FaceTime as they traveled between Istanbul and Paris to discuss their practice and their contribution to Manifesta 12, which opens on June 16.

FULLERTON  Beyond your enjoyment of cooking, what made you call your collaboration Cooking Sections?

COOKING SECTIONS  Our first project in 2012 was a collaboration with three colleagues at Goldsmiths College looking at a village in northern Alaska, which was one of the first so-called climate refugee communities in the United States, inhabited by people who were displaced from their homes by flooding and erosion caused by melting of the permafrost. Food became a very useful operative tool to understand how environmental transformations were being seen around the island where the Alaskan villagers lived and also to understand all the forces like governmental bodies and federal entities that were taking advantage of these changes. There is a whole economy around these transformations; there are a lot of postcolonial conditions in Alaska. We started to use some of the plants the community foraged and the animals they hunted to understand their concept of seasonality—how the landscape changes throughout the year and allows for various livelihoods. We realized that food was very conceptually generative, and that’s how Cooking Sections came about.

FULLERTON  Could you describe the work you will present at Manifesta?

COOKING SECTIONS  The piece, What Is Above Is What Is Below, looks at the water scarcity in Sicily which has led to the development over centuries of very sophisticated water infrastructures. A beautiful network of tunnels is still in place from the Arabs’ rule from the ninth to eleventh centuries; it brings water from the mountains to Palermo. The communities living on islands off Sicily have ancient techniques of creating microclimates around trees. For example, by building a very thick wall around a single tree, you can create areas of condensation and reduce the amount of water needed to irrigate the tree. We are quite fascinated by those microclimates. It’s like building houses for trees or watering with stones. In the context of climate change, we are looking at the political implications of emancipating trees from water, a resource which for more than one hundred years has been used as a political tool to control the population and the land. Water infrastructure is still political today; there are a lot of competing interests and fraudulent activities around it. Sicily is a major agricultural producer in Europe so water is very key, to sustain not only the people living there but also one of the continent’s biggest agricultural economies.

COOKING SECTIONS  There will be certain structures for creating microclimate conditions around a few specific trees that we chose, and we will be monitoring the performance of those trees throughout the duration of Manifesta. We are also collaborating with a series of restaurants that will be serving Secco al Sacco, a picnic box of food made from drought-resistant ingredients. People can take it to the microclimate structures and eat under the trees.

FULLERTON  What will be in the boxes?

COOKING SECTIONS  It’s a surprise! The food in them uses ingredients that are endemic to the Sicilian landscape and require little or no irrigation and can survive extreme temperatures. These crops are presently less popular than others that extract excessive amounts of water from underground. We can reveal two: carob and manna.

FULLERTON  What gave you the idea of using recipes to broach broader geopolitical issues?

COOKING SECTIONS  For us recipes are protocols. The first project we did for The Empire Remains Shop was the Empire Remains Christmas Pudding. It began with a 1928 recipe for the most English dish made from the most un-English ingredients, from seventeen different places of origin. It functioned as a map of the relationships, economics, and geography of the British Empire at the time. We made the contemporary equivalent thinking of the remains of Empire today. If you take the recipe in our book to the supermarket, you’ll start questioning why today you can’t find currants from Australia or ground cinnamon from India. The list of ingredients traces the changes in the postcolonial food market by exploring the economic strategies at play. Where foodstuffs were once promoted according to their source, today they are “packed in the UK” or “produced in the EU.” The origin has been erased.

FULLERTON  The Empire Remains Shop grew out of a British marketing plan nearly a century ago to sell colonial products through stores called Empire Shops. The shops never materialized but you demonstrated through diverse projects that the imperial legacy is alive and well. What were your most startling findings?

COOKING SECTIONS  We discovered a new economy based on carbon off-setting that functions as a form of colonialism. Big corporations, governments, and other institutions are leaning towards implementing green solutions. But these processes marginalize big populations for the sake of saving the environment. The global north seems to think that we can keep on damaging the world because there is some way to offset the damage.

FULLERTON  Your project The ‘Next “Invasive” Is “Native”’ around Japanese knotweed draws implicit parallels with the discourse around migration and the xenophobia unleashed by Brexit. Was this in your thinking when you conceived it?

COOKING SECTIONS  It’s almost like an automatic or subconscious reaction to the climate we are surrounded by living in London. Brexit is more present as a situation but similar things are happening in other places of the world. That was a reaction in a way to the making of the “other” and how people are too often made foreign. For the 2016 Glasgow International we made ice cream with Japanese knotweed, a plant that has been declared a “non-native” and “invasive,” in collaboration with a few ice cream parlors run by proprietors of Italian descent. In London the core of the project was really to think about a plant’s agency in the UK real estate market. In the window of the Empire Remains Shop we mirrored the display of the realtor across the road and people would walk in for a consultation. We did not aim to set up a business to run it; that would be more in line with the “solutions” approach. We prefer to think of disruptions.

FULLERTON  Each buyer of your The Empire Remains Shop must sign a franchise agreement. Is this to encourage people to take an active stake in your project?

COOKING SECTIONS  Of course. It’s an invitation to appropriate the project and transform it. For us it was very important to think of the book not as the catalogue of the project but as another aspect of The Empire Remains Shop that pushes the project forward. We were really interested in how we could use it as a tool to think about emancipating or decolonizing contemporary food practices The whole project tried to think of counterapproaches to buying and selling. If the neoliberal world has appropriated the language of sustainability, can we do it the other way around and appropriate neoliberal tools to challenge the logic of the franchise and think of it in terms of value beyond profit margins? We’re interested in the original French meaning of “franchise” as releasing oneself from servitude.

COOKING SECTIONS  We don’t think we provide solutions because we don’t have them. Our social and political interventions question and problematize certain situations. By drawing attention to various situations we are complicating them and making people take more responsibility.