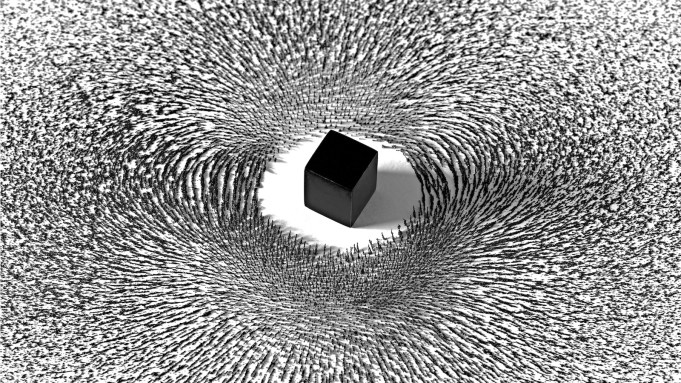 With the world’s eye on the Middle East and its upheavals, the 15th

FotoFest Biennial in Houston presents a timely and extensive view of art production in the region. “View from Inside: Contemporary Arab Photography, Video and Mixed Media Art” (through Apr. 27) includes 48 participants from Morocco, Egypt, Lebanon, Palestine, Syria, the Arab Gulf states and Yemen, and presents an intriguing assessment of a region that arouses a multitude of conflicting and complex reactions in the U.S. and elsewhere in the West.

Artists included range from those well known in the West, such as Mounir Fatmi of Morocco and Wael Shawky of Egypt, to those better known in the Middle East and Europe, such as Saudi artist Reem Al Faisal, one of the few women to extensively photograph the hajj, and Rula Halawani, whose black-and-white evocations of Palestine past and present are quietly devastating. Veteran Iraqi artist Sadik Alfraji pays tribute to the memory of his father, his tender animation a recreation of their Baghdad house, while Palestinian photojournalist Ahmed Jadallah portrays the daily life of the people of the Gaza Strip.

German independent curator Karin Adrian von Roques is the exhibition’s chief organizer, in collaboration with artistic director Wendy Watriss, who founded FotoFest in 1983 with her husband Fred Baldwin. Both Watriss and Baldwin began their long careers as photographers and journalists.

Von Roques spoke with A.i.A. at a hotel in Houston about “View from Inside” as presenting a nuanced view of contemporary culture in the Middle East.

LILLY WEI Could you tell me how this project was initiated?

KARIN ADRIAN VON ROQUES I met Wendy Watriss and Fred Baldwin in New York through a Houston art dealer and we discovered that we shared many ideas and a similar spirit. We had the same mission to bridge cultures, although I had a particular mission to bring art from the Middle East to Western audiences. I had become very interested in contemporary art in Islamic countries in the early ’90s, focusing on Iran in my research. There I discovered a vital art scene with so many important artists. I wondered why more were not known in the West and believed they should be.

WEI How did you come to be interested in the culture of the Middle East?

VON ROQUES I grew up a house where there were always people from all over the world. My father worked for institutions of cultural exchange and was deeply involved in establishing relationships and cultural programs with other countries. We should understand our common humanity.

WEI How did you select the artists?

VON ROQUES Wendy and I did a first selection independently but we were in almost total agreement. I have knowledge of the history, the context and the content, and Wendy had great knowledge of photography and selected works that were incredibly strong formally as well as in meaning.

WEI What were the themes you wanted to present?

VON ROQUES I didn’t want to have an overall theme. Because artists from the region were not well known in the West, I wanted to have diversity and for the work to be representative. The first idea, of course, was that it is a strong work. However, when we looked at the selection, I was astonished by the many connections. If there is a theme, then, it is the theme of change, such as that brought about by the Arab Spring, technological advances and the modernization of the desert, now a hub for the Middle East, North Africa, the Far East and the world.

WEI What insights do the works on view offer?

VON ROQUES I am touched by the theme of the wall that some of the artists deal with because I was in Berlin when the Berlin Wall was built, dividing many German families, splitting the country. Global nomadism is another. Many of the works ask the question: where are we going? It must be a question for every human being. Many are personal histories. And also evident throughout the exhibition is the Islamic concept of al-Haq, that the universe is founded on truth and justice.

WEI There are quite a few arresting images of Mecca.

VON ROQUES Yes, I particularly liked them because they raise many issues about global modernization. Mecca is historically a place of pilgrimage, where the Ka’aba [an iconic building at the center of the most sacred mosque in Mecca] is. Now, the Ka’aba is shrinking in comparison to all the construction going on around it. So how does that effect the respect we have for the holy places of the world? Is that changing?

WEI I see that about a third of the artists are women.

VON ROQUES I was an artist before I began to study the history of calligraphy and Islamic art and was horrified about how women artists were perceived. With Arabic women artists, I am also dealing with so many misconceptions. Yes, these women may have more difficulty in making art but so do women in other societies. It was important to have women represented but not as a quota exhibition.

WEI Are there photojournalists in the biennial?

VON ROQUES There is one photojournalist, the Palestinian Ahmed Jadallah. For me, photojournalism is usually another discipline with its own constraints, but Jadallah’s images are very powerful and very truthful, and they show the shocking details of the injustice that is happening in Syria, Egypt and other places.

WEI Would you talk a little about the title, “The View from Inside?”

VON ROQUES The title was selected because I didn’t want the curator to completely frame the discussion. I think it is important that the artists, almost all of whom are well-established, speak for themselves and show us their own realities through their eyes, their voices. I wanted the installation to reveal their individuality. There are so many voices and I wanted to present their vision as authentically as possible. I hope we have succeeded.