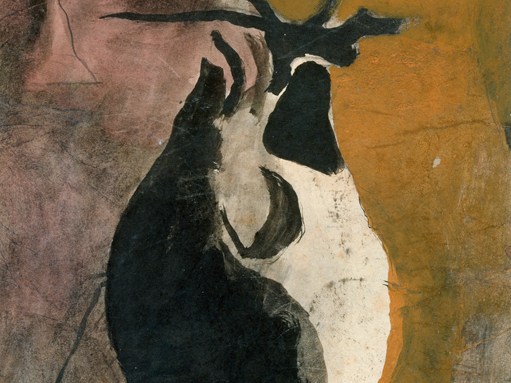 As curated by 2011 Turner Prize Nominee George Shaw, “Graham Sutherland: An Unfinished World” at Modern Art Oxford [through March 18] brings together over eighty rarely seen works on paper from collections across the UK. Shaw’s own painting has been celebrated as a meditation on the nature of time, place and memory. His selection has resulted in a visually compelling exploration, revealing in Sutherland’s works a dark, elusive and magical world between the real and imagined.

Sutherland (1903–1980) was a painter, printmaker and designer whose examination of nature encompassed landscape, portraiture and religious subjects. He is perhaps best known for powerful abstracted landscapes typically featuring twisted vegetal forms. Often, these gnarled shapes constitute a metaphor for the struggle of every living thing to survive the onslaught of time and natural forces. Sutherland’s approach combined the richness of the English Romantic tradition of Samuel Palmer and William Blake with the formal innovations of modern European art. The lessons offered by Cubism and Surrealism, and particularly the work of Pablo Picasso, encouraged him to develop an approach whereby “things found a new form through feeling” [1].

In his lifetime Sutherland was widely regarded as the outstanding British painter of his generation. Many of the works on display were inspired by Sutherland’s experience of wandering through the Welsh landscape, exhilarated by the “exultant strangeness” he perceived in the hills, valleys and shorelines of Pembrokeshire [2]. Using heavy lines and bold colours, he conveyed the otherworldy landscapes and shorelines of Pembrokeshire in western Wales. Other works include studies undertaken following the outbreak of the Second World War when he was employed as an Official War Artist recording the devastation of bomb damage in London and South Wales.

Art historian and Sutherland scholar Rachel Flynn spoke to Shaw at the show.

RACHEL FLYNN  You grew up in Coventry, home of Graham Sutherland’s vast cathedral tapestry [Christ in Glory (1957–62)]. Were you aware of his work when you were young?

GEORGE SHAW  When I starting thinking about this exhibition I’d totally forgotten about the tapestry and had completely forgotten about how as a child I was quite absorbed in the studies for it they had in the Herbert Art Gallery in Coventry. When we first started thinking about doing this show a couple of years ago I was interested because of my own work. I was finding other artists who had affiliations with landscape similar to my own. I don’t think of myself being a landscape painter. I paint the landscape as a way of getting over other themes-time or even politics and what I started to see in Sutherland’s work was an artist who I genuinely don’t think was that much interested in the landscape. Sutherland said that these were things for “storing in the mind.”

I don’t think that, with the exception of the sketchbooks, there is work in the exhibition that was made in situ; I think they’ve all been made in the studio. They’ve all been made in an airless environment; his studio in Kent had no windows. I find that interesting; my own studio has no windows, I don’t sit in front of the motif and draw. He’s not an artist who’s connected to the environment; he’s not an artist who’s interested in the weather, as Turner was. Nothing moves in his work, everything is completely permanent. Even a ruin is permanent and fixed, and I began to find that there’s something in what he was doing that was similar to what I was doing.

FLYNN  Following his death in 1980 Sutherland fell out of fashion. Only recently has there been renewed interest in his work. Why do you think this might be?

SHAW  A couple of people have commented on the timeliness of the exhibition. No one said, “Oh, it’s great that you’re doing the exhibition,” everyone said, “It’s timely.” I’ve started to think about why this world, the British Romantic movement popular between the wars and during the war; what makes that timely, and thinking about our own contemporary context. In the 1930s there’s a European crisis quite clearly, and an economic crisis. These Pembrokeshire landscapes of 1935 and 1936 look desolate and they prefigure, they almost make a prophecy of, the war. Is that the kind of age that we’re living in at the moment? In five years time will there be something quite catastrophic?

FLYNN  Part of the reason Sutherland’s critical popularity fell seems to have been because he was characterised as being too much an “establishment” figure. Do you identify conservative ideas in the work?

SHAW  It’s completely the opposite. There’s something deeply unsettling about work that’s often described as being conservative. I’m convinced there isn’t a trace of conservatism in the exhibition whatsoever. Even the frames are subversive, particularly within a contemporary art context. I know people who have walked into the gallery and been shocked. It’s revolutionary really; it was in its time really. You think about Sutherland and he was the Damien Hirst of his generation in the 1930s and 40s—just shocking. In this exhibition you could have done a contemporary hang, you could have stripped the works of their frames, put them all in the same frame, but it would just have become bourgeois nonsense, a stylistic thing. I think a lot of the images are timeless, and the frames are the social context. They’re the fashion bit, which is quite intriguing really.

FLYNN  The exhibition is called “An Unfinished World.” In what ways do you see Sutherland’s work as “unfinished?”

SHAW  It came from a late 1930s review of Sutherland’s. Eric Newton described Sutherland’s world as “an unfinished thing, somewhere on the fifth day of creation.” The concept lingered with me and I feel like the world he paints is almost post-apocalyptic. It’s a kind of science fiction rendering, and apart from being made in the past it’s like looking 8000 years into the future.

All the works in the show are works on paper, which is kind of a trendy way of describing a drawing, and despite what contemporary people might think it’s still a subservient way of working. It’s beneath the masterpiece.

A study is beautiful because it isn’t finished. The reason why a marble sculpture or a great oil painting is, for me, lacking in life is because it’s finished, it’s someone making a statement. There’s something quite beautiful about an unfinished sentence or an unfinished symphony. Not only does the title refer to the world he paints, which I think is an unfinished world, it also refers to the notion of what a drawing is, the beauty of a drawing, that it isn’t complete. It’s like a child: to think a drawing isn’t as beautiful as a finished oil painting is like saying we can’t enjoy what children say until they’re fully adult. Sometimes his studies can be beautiful while the actual painting they’re made for are a little bit dead. The paintings are something like corpses whereas the drawings are full of vigour, full of life and optimism.

FLYNN  You have included late, often forgotten works from the 1970s, when Sutherland returned to Wales after an absence of over twenty years. What was the significance of this period?

SHAW  I find his return, when he went back to Pembrokeshire, to be almost an acknowledgement that it was unfinished. As an artist I find it quite uplifting that he had the balls to acknowledge that.

President Bush Cops to Infamous ‘Bushisms’ in New Video: ‘I Was the Master of Malaprop’

My Beard Is a Decade Old, and I’m Begging My Bearded Brethren To Use This $15 Beard Care Tool