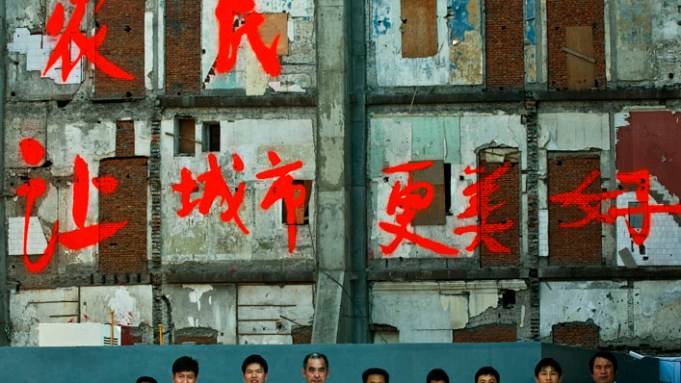 Addressing “peasant” culture and creativity, the exhibition “Cai Guo-Qiang: Peasant Da Vincis,” organized and curated by the artist at the Rockbund Art Museum in China, raises contemporary questions in the world’s most populous nation. The first question regards the “visibility” of the portion of the population that, due to great sacrifice, has allowed for unparalleled global economic and social development. We ask Cai how his sculpture, and the amateur machine-makers he finds all over the Chinese countryside, attest to these changes:

GERMANO CELANT: As an artist, and an internationally recognized one, you emphasize the creative and participatory contribution of this political class, which has been a true resource for rebirth and changes in China. Apart from the artistic aspect of the operation, what is the political aspect for you?

CAI GUO-QIANG: The official slogan of the 2010 World Expo Shanghai is “Better city, better life.” In response, I proposed “Peasants—Making a better city, a better life,” and the title of the exhibition is “Peasant Da Vincis” because the highways and skyscrapers in cities across China are built by migrant workers from rural areas. These workers are the reason that the country is the world’s largest factory. In present-day Chinese society, the pressing political issues are not only about granting these workers their civil rights. There are other critical issues, like whether China can transform itself into a society with creative potential, whether the government can narrow the gap between rich and poor, and sustain a stable path of social development. Chinese society is at a historical turning point, and it is going through a transition at a fundamental level. The days of mass cheap labor—the age of exploitation—are no longer sustainable or acceptable; otherwise the people will revolt.

Relying on its national power, China can successfully organize large-scale events such as the Olympics or the World Expo, but the world still feels uneasy about China. The important thing is to be able to see the individuality of the Chinese people, to see their personal values, and to respect an individual’s freedom. Only individual creativity can bring about real social development. Through these peasants, we can see that the stories of their failures, their dreams and their courage are real; hence the themes of the exhibition and the debates in the media stem from these social agendas. (Left: The peasant inventors in front of Peasants—Making a Better City, a Better Life, 2010. Photo by Lin Yi, courtesy Cai Studio)

CELANT: Objects built by peasants are part of a culture of spontaneous bricolage-that is, the history of a foundational creativity that is supposed to cross registers and demographics of the population. But the examples that you collect belong to a specific trajectory of modernity, and are not artisanal or vernacular creations; rather, they are constructions of airplanes, submarines, flying saucers and robots that reflect a zoomorphic iconography. They return to images of fish or birds, almost as if they were attempting to unite the memory of the ancient with that of the present. In 1994, you salvaged a wooden boat in Iwaki and presented it in an exhibition, and at the Venice Biennale I curated in 1997, you invented a small pagoda-shaped “space ship” [The Dragon Has Arrived!], made of fragments of worn-out wood, with little Chinese flags. Would you say that by collecting these “things” made by peasants you are creating a historic record?

CAI: I see shadows of myself in the peasants and in their creations: in the curiosity about speed, the desire to escape gravity, the passion for making things, the tendency to use whatever materials are available, the obsession for useless objects…  Although my art relates to social issues and problems in art history, my most important motivation is that I enjoy making things very much. It keeps me innocent, like a child.

CELANT: It is interesting that this approach to exploring a technology, while primary and elementary, spans generations. Does it seem as if fantasy were a major tool for escaping difficult living conditions?

CAI: Any work that is born out of natural serendipity, or reverts to simpler times, is poignant for people—in any era. When peasants spend their days facing the ground, working with soil and their backs to the sky, their natural path of escape is to fly upwards. No matter what the future of these peasants holds, no matter how their identity, their living environment and their conditions for survival may change, everyone still needs a time-space tunnel to give themselves another space to escape their reality.

CELANT: Much contemporary art, from Panamarenko to Tom Sachs, looks at the imitation of the technological, whether in the form of a dirigible or a Star Wars space ship, and immerses itself in concrete reality of contemporary existence. It relies on a fictitious cinematographic and spectacular aspect to interrogate the potentially repressive and constrictive character of the culture. By proposing a return to the simplicity of myths about flight, is it your intention to offer a critique of the artificiality of Pixar or Marvel’s imagination, something that creates narrative not with flesh and blood individuality, but with 3D figures, made up of pixels?

CAI: Computer animation is one way to liberate people from their circumstantial gravity, and it is one way to give them mental freedom. The virtual world is an unknown world, and humans like to explore unknown worlds. But the freedom and wonderment of infinite possibilities in virtual reality can never replace the sensuality of making love, for instance.

CELANT:Is this the risk that you thinks that China, which is rapidly westernizing, is running?

CAI: The Chinese are not aliens from outer space. The problems that the Western world faces are more or less the same as the ones that the Chinese people have to confront. Only with some cultures, their capacities for self-reflection and self-regeneration are stronger when dealing with these issues. China is modernizing later than the West, and has to face some of the very same problems caused by modernization. The country may manage to gain without losing too much. It is too early to tell.

CELANT: Is there a relationship between the handmade quality of your paintings and sculptures and the “Da Vinci” objects? Does the “great artist” have to present himself as a total being, capable of tackling science, architecture, flying machines, anatomical treatises and painting, in the manner of an Italian Renaissance protagonist? (Left: Cai Guo-Qiang, Fairytale, 2010.)

CAI: Many artists try to construct a world for themselves: from concept to format, from knowledge to inspiration, to form a methodology to learn about, and to express the world. In his or her world that the artist is pursuing, certain aspects are essential for its construction, while other things are less so. From my point of view, Leonardo da Vinci’s stuff is more scientific than the peasants’, while the peasants’ are more artistic than Leonardo’s.

CELANT: How much of your production involves the “burst,” the explosion of energy in the form of fireworks or events in history? Is it the artist’s task to blow up his own time?

CAI: The theme “Peasant da Vincis” and the use of gunpowder in certain installations share common threads: spontaneity, but also aspects of control. Temporality and the transformation of energy are two very important aspects in my work. The role of art in society is not to resolve conflicts; rather it is to express these conflicts and antagonisms. So art in itself can embody both positive and negative energies; it is full of indecisiveness, and can flip-flop back and forth, but an artist’s task is to create an imperfect world.