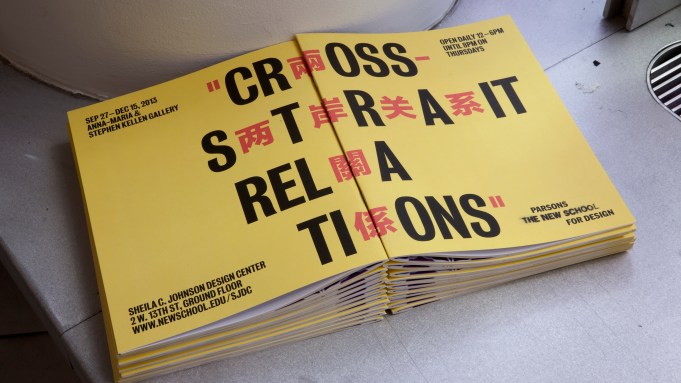 Featuring works by 10 artists such as Ming Wong, Chen Chieh-jen, Cao Fei, Lee Kit and Michael Lin, the exhibition “Cross-Strait Relations” takes on the charged issue of mainland China’s relationship with Taiwan. On view through Dec. 15 at the Sheila J. Johnson Design Center of New York’s Parsons, The New School, it also extends its concerns about identity, independence and immigration to Hong Kong, Singapore and Chinese diaspora communities throughout Southeast Asia and the West.

The exhibition’s organizer, Taiwanese-born artist and assistant professor of photography Arthur Ou, himself a longtime U.S. resident, recently elaborated his curatorial rationale in an e-mail discussion with A.i.A.

RICHARD VINE What is it about the current moment that prompted you to address this historically complicated issue?

ARTHUR OU Things like economics and political forces have motivated Chinese people to move all over the world, and in some cases stay for many generations in their new homes. However, this exhibition proposes another way to consider these movements—through artistic forces. Over the last few years I have had numerous opportunities to travel to China and Taiwan. I have noticed that many artists of Chinese descent move frequently from one region to another (either temporarily or longer term), for reasons that are counter to the more traditional factors of migratory movements. I wanted to learn more about their experiences. The exhibition, which explores the pluralism of Chinese identity, geographically and culturally, is an attempt to cast in a new light the historical and political vicissitudes embedded in the phrase “Cross-Strait Relations.”

VINE How did you go about choosing the show’s artists?

OU I wanted to provide a thoughtful glimpse at the activities of artists from these Chinese regions-Mainland, Hong Kong, Singapore and Taiwan. After many discussions, Radhika Subramaniam, the director of the Sheila Johnson Design Center, and I agreed on a selection that acknowledges multiple types of Chinese identity. This was essential, since Parsons has a high percentage of students with family backgrounds in the regions covered by the exhibition.

The unique space of the Center was also a consideration. For example, the large street-side windows of the center seemed a fitting site for Michael Lin to install one of his large patterned coverings. I knew that, in a space this size, we wouldn’t be able to survey the full spectrum of artists from across the Chinese diaspora. Instead, I chose to focus on those who best exemplify an itinerant spirit and who deal with a sense of traversal, one directly reflecting their actual movements both within these regions and around the world.

VINE How does this relate to your own artistic practice, your own personal history?

OU My family moved from Taiwan to California when I was 11 years old. My father says the move resulted from his desire to obtain a better education for his children in the U.S., although I suspect it was also prompted by the atmosphere of uncertainty in Taiwan. (There has been great tension between Taiwan and the mainland China since the PRC’s formation in 1949, and Taiwan itself was under martial law, imposed by the Nationalist government, until 1987.) Therefore, the fraught relationship between these two regions has always loomed large in my consciousness. The exhibition relates to my own uneasy identification as at once Taiwanese, Chinese and American. I have explored this sense of hybridity in my past work, though recently I have moved away from works that are overtly personal.

VINE Does the show stress the pluralism of Chinese identity, in part, because nationalistic forces in the PRC put such subtle but insistent emphasis on race—especially Han lineage?

OU With the recent rise of the mainland as a political, economic and cultural power, the identity of a Chinese individual is increasingly more monolithic. In the case of non-Chinese regions like Mongolia and Tibet, there is even an imperialistic enforcement of this identify. The exhibition proposes to broaden and challenge the traditional, politically motivated, definitions of a Chinese identity.

VINE What would you like viewers to take away from your show?

OU I would like them to reconsider the phrase “cross-strait relations,” which carries with it a heavy historical weight. No doubt, the political, economic, and cultural forces that affect the two regions facing each other across a narrow body of water will continue to run their course. But there are other minor forces, exemplified in the works by the artists assembled in this exhibition, that disrupt, even if slightly, the trajectory of historical momentum.

11 Stellar Wines to Pair With Chocolate, From Dark to Milk and Everything in Between

This Free Password Manager Has Never Been Breached, Unlike Some of Their Biggest Competitors