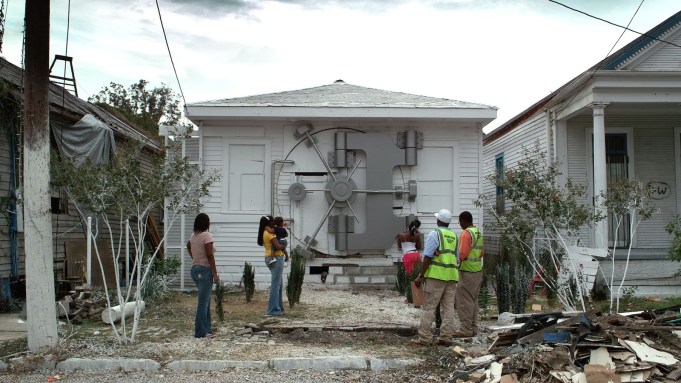 At a 1993 conference at New York’s Dia Center for the Arts, artist Mel Chin took to the stage and pointed a rifle at the audience. The act deeply impressed Herb Tam, curator at New York’s Museum of Chinese in America, when he saw a photograph of the event years later in art history class. In a recent panel discussion at the New Orleans Museum of Art, inaugurating the retrospective “Mel Chin: Rematch” (through May 25), Tam said Chin “provided a working model for how activist art could function in society.” He added, “For Asian-Americans, it was our equivalent of Malcolm X’s ‘by any means necessary.'”

“I like to think of myself as Malcolm triple-X,” Chin joked in a recent phone interview from his North Carolina home.

The exhibition, including 75 works created over four decades, illustrates the 62-year-old artist’s cred as a fearless fighter for social justice. Chin has used many means, forms and materials, including sculpture, drawings, video games, site-specific works, collages, performance art and land art, in his quest to conjure solutions for society’s ills. Of his distinct lack of a unifying medium or style, he said, “Diversity is my signature.”

After brandishing the rifle at that 1993 lecture (part of a performance called I See . . . the Insurgent Mechanics of Infection), Chin recited a manifesto on how art must adopt the methodologies of both a sniper and a virus to penetrate beyond the art world and enter society’s bloodstream (“coursing through the mucosal highway of human beings,” Chin said in our interview). He told A.i.A. how he had hidden a microphone in the gun’s night-vision scope, which he used to proclaim his doctrine, saying, “If you’re really concerned with changing society, you need to make use of efficient opportunities” and mechanics. He wanted to demonstrate how art can operate stealthily to surprise its prey and then infect and infiltrate a host, replicating ideas virally.

Chin put his viral analogy into practice with an art-enhanced television project called In the Name of the Place (1995-97). Art students from the University of Georgia and California Institute of the Arts, where he was teaching, collaborated with him to create props laden with political imagery, which, with the cooperation of the show’s producers, appeared in the television series Melrose Place. In one 1996 episode, an actress carried a paper bag of Chinese takeout food labeled with the Chinese characters for “human rights,” alluding to the Tiananmen Square protests of 1989. Shown endlessly in reruns, the series exposes millions to these subliminal messages.

“I’m a conceptual artist—that’s my job description,” Chin said. “It’s about ideas.” Those ideas often spring from ecological concerns. Chin’s best-known project, Revival Field (begun 1990 and ongoing) stems from his collaboration with a scientist to prove that hyperaccumulator plants can cleanse soil of toxic metals like cadmium and zinc. The work continues at a contaminated Superfund site, Pig’s Eye Landfill in St. Paul, Minn. “The most important artifact is the creation of a scientific technology,” Chin said.

Operation Paydirt (Fundred), begun in 2006, is another collaboration, this time with both scientists and schoolchildren throughout the U.S. Using a protocol called TLC (Treat-Lock-Cover), in New Orleans and in West Oakland, Calif., lead-contaminated soil is treated with a phosphate, Apatite II (derived from fish bones), which binds to lead, neutralizing the lead’s toxicity. The ground is then landscaped.

“It started with soil, but we’ve gone beyond soil,” Chin said. “Lead is our enemy, a neurotoxin that permanently affects millions of kids. There’s a dream within the lead [abatement] community of 100% lead-poisoning prevention for children.”

Miranda Lash, the museum’s curator of modern and contemporary art and organizer of the exhibition, pointed out in an interview at the museum the proven connection between elevated levels of lead in the blood and learning disabilities, low I.Q., and violent behavior when children reach adulthood. “New Orleans’s number one problem is the pervasiveness of violent crime,” she said.

When Chin learned that lead abatement would cost $300 million in New Orleans (the second most contaminated city in the U.S.), he issued a call to action, enlisting students to draw “fundreds,” replicas of hundred-dollar bills. When he has reached the goal of $300 million in faux bills, he plans to deliver the drawings to Congress, as part of a populist plea for remediation funding. A bank vault door Chin constructed to protect the bills and a wooden pallet supporting 500,000 of the sheets are on display in the exhibition.

By ridding the soil of pernicious lead—to short-circuit its link to violence—Chin hopes to reduce crime in New Orleans, a city frequently described as the murder capital of the U.S. “The tension between the forces of violence vs. the power of ideas is explored throughout Mel’s career,” according to Lash.

Criteria by which to judge social-practice art are still evolving. What makes it art and not social work or community service? Lash suggested that the key ingredient is “poeticism, which we demand in art but that you wouldn’t look for in the way a church distributes canned goods.” More evocateur than provocateur, Chin creates objects and projects that draw one in with their beauty and subtlety, then expand in the viewer’s mind, inspiring deep reflection. Ever evolving and mutating as an artist, Chin sees his first retrospective not as a conclusive summation but a summons to push harder, saying, “I’m not done yet.”