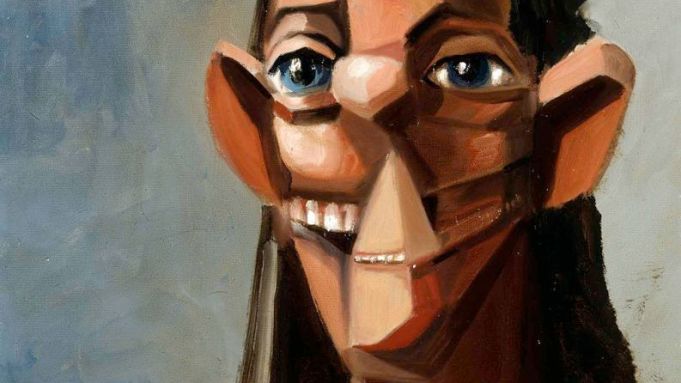 “Marble Sculpture from 350 B.C. to Last Week” and “Portraits/Self-Portraits from the 16th Century to the 21st Century,” currently on view at Sperone Westwater, Gian Enzo Sperone’s gallery with Angela Westwater on the Bowery, combine two of the 71-year-old dealer’s passions: collecting and history. With 90% of the works coming from Sperone’s private collection, the shows spread over four floors-the marble exhibition is on the ground floor and balcony; and the portraits are on the two floors above.

“I do exhibitions like these to explore how good our great artists are in comparison to the Old World Masters,” Sperone told A.i.A. “I have expectations for how I think the language of the art world should develop.”

Bertozzi & Casoni’s GorilBattista (2011) is the head of the creature, its hooded eyes closed, being served up on a platter alongside crumpled plastic gloves and cups, all rendered in white marble. The sculpture is installed near an Ionian Grave Relief from the 4th century B.C., a human-scaled statue of Icarus by Tommaso Bonazza from the 18th century, and pieces by modern and post-war artists such as Richard Long, Saint Clair Cemin, Jean Arp, and Joseph Kosuth.

“It was a revelation that the work of a contemporary artist like Ai Wei Wei could be so powerful alongside of the work of a great master like Batoni,” Sperone commented as we gazed at six of Ai’s sixty-four Marble Doors (2011), which line the back wall of the first floor. “In my house, I already had time periods mixed, but I wasn’t sure that it would work well in the gallery.”

Particularly wonderful is a bust by Barry X Ball, rendered in translucent Iranian onyx. Purity (2008-11) depicts the veiled face of a classic female bust, the onyx just as ethereal as the most sheer of silks. “In the beginning of the 20th century, artists attempted to destroy the art historical canons,” Sperone explained. “As a result, I wasn’t sure that artists today, even the talented ones, knew how to treat an object. But many of the contemporary artists in this exhibition can do what Michelangelo was able to do with his hands in the 15th century.”

The portrait exhibition divides contemporary paintings-most of them self-portraits-on the third floor from the Old Master portraits on the fourth. “With Old Masters, it’s more difficult to find self-portraits,” Sperone said by means of explanation. “They exist, but I don’t have good enough ones in my inventory.”

The 20th century portraitists include Picasso, Warhol and Condo. A 1942 painting by Francis Picabia depicts one of his muses, Suzanne, while Ahn Duong contributes a cartoonish depiction of Susan Sarandon from 2009.

Some fantastical, some entirely realistic, these pictures are markedly different from the classically stylized portraits on the fourth floor, which depict allegories, mythological gods, religious authorities and historical figures. Almost all rendered in three-quarter-length poses, the figures shown are all men, with the exception of Allegory of Geometry (c. 1650) by Francesco Cairo, which depicts a baroque female figure, rotund and engulfed in scarlet cloth, holding a compass. All together, the exhibition attempts to explore how privileged human beings chose to idealize themselves.

If the exhibition makes an argument, it’s that in pre-modern times, human beings wanted to put their best foot forward, depicting themselves not only in their most perfect form, but also surrounded by symbols of power, education and success. Today, we debase ourselves, rendering our visages in loosely rendered gestures, and surrounding ourselves with symbols of trauma, pathos and narcissistic need for self-exploration, embodied in the exhibition by Self-Portrait with Doctor M. (1989) by Julio Galan, in which the figure, splattered in red paint, draws blood from his wrist with his teeth as he stares directly at the viewer. “If you get applause every time you do something,” Sperone says, “you should be doubtful, because then you’ve lost a sense of having to struggle to create something meaningful as an artist.”

Sperone first started buying Old Master paintings 40 years ago, when he was a maverick art dealer in Soho showing the likes of Roy Lichtenstein, Robert Rauschenberg and Bruce Nauman. Collecting is, for Sperone, both a great love and a great curse. “It is what I was born for,” he sighed. “I’ve never had a vacation. After two days looking at the horizon of the sea, or the slopes of the mountains, I’m ready to commit suicide. Because my thoughts are always, ‘how far is the best dealer from here?'”

Asked if particular pieces in either exhibition had any interesting acquisition tales, Sperone spoke so quickly that he almost could not keep track of his thoughts. “It’s an enchantment,” he said of the Portrait of Cardinal Niccolo Gaddi (1550s) by Jacopino Del Conte. He then went on to list myriad reasons, with pride: The sitter was the descendant of Taddeo Gaddi, a beloved pupil of Giotto, and his mother was from the Altoviti family, one of the most powerful banking families in Renaissance Italy. The work itself had been in the possession of Jacques Goudstikker, a famous Jewish art dealer in the 1930s, whose collection was looted by the Nazi commander Hermann Goring during World War II. After the war, it was restituted to his family. Sperone was the first buyer after it was put back on the market in 2006. “They asked 200,000 pounds for the piece, but I would have paid more!”

Finally, a Champagne Bottle Designed to Let You Drink Sparkling Wine in Space