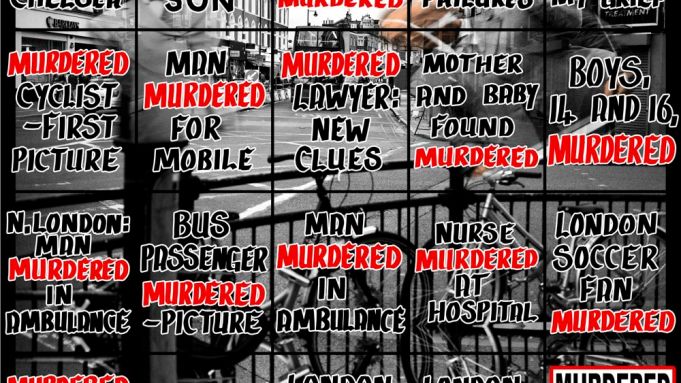 In much the same way that Charles Dickens’s writing brought to life the roiling—and frightful—humanity of London in the 19th century, Gilbert & George have used the city as the main subject in their work since the early 1970s. In their exhibition “London Pictures,” currently on view at Sonnabend, and the Chelsea and Lower East Side locations of Lehmann Maupin, they bring the streets of East London to the walls of the galleries. By doing so, they elevate the violence, the horror, the oddity and the quotidian of urban life to the status of high art, and in the process, cement a place for it in history.

Based on 3,712 newspaper posters announcing the most sensational headlines of the day in bold, block lettering—mostly culled from the London Evening Standard—which the artists stole from the front of kiosks and newspaper stands on the streets near their shared home in East London, the works are marked by Gilbert & George’s characteristic insertion of selfportraits into each image. In their studio, the artists photographed five years’ worth of posters and then collaged them together according to recurring subjects , including “Killing,” “Playboy,” “Muslim” and “Terror Plot.” The resulting works are the 292 “London Pictures.”

Each piece features one of the Queens of England in the bottom right corner, the images lifted from portraits on coins issued throughout their reigns. The posters are then laid over background images of such materials as black lace curtains or brick walls, which the artists refer to as “house burkas,” dividers that allow the works to look out, but no one else to look in. Except, of course, for Gilbert & George themselves, who hover in the background like ghostly visitors, always present, always bearing witness.

The duo met with A.i.A. at Lehmann Maupin in Chelsea to discuss how the “London Pictures” were originally conceived, and why, despite all appearances to the contrary, it is ultimately an optimistic body of work.

BRIENNE WALSH What first drew you to the posters, and why did you decide to turn them into art?

GILBERT We used to look at these posters again and again, because they are very close to Liverpool Station, where we are located. We just took some photographs of them, but we didn’t know how to use them. Slowly, it came to us that they could tell an amazing story. One that is real. One that is not fake. It is quite a brutal story. It’s not like sunshine all over the place.

GEORGE They are the celebrations of the lives and deaths of the people who are forgotten, but are in the pictures. We had this huge piece called Murder that is the biggest group of posters. If you do a drawing or painting of a man shooting a man, it doesn’t mean anything. It’s totally irrelevant. But if you have all of these real instances, where someone really does get murdered—a wife, a man, a son, a boy, a girl, they are a sensation. They tell a story.

GILBERT Even over there [points to a work], “a man dies after sex act gone wrong.”

GEORGE “A man dies after drinking cocaine laced rum.” There’s a warning to us!

GILBERT You actually couldn’t make them up.

GEORGE [points to another work] “Old aged pensioner died after a wart operation.” That’s a tragedy! He wanted to improve his appearance.

GIBERT We did do one for ourselves when we had a big show at the Tate Modern in London. We always thought, “Why don’t they write about art? All the posters ever have to do with is killing and knifing.”

GEORGE So we did a spoof on them for the Evening Standard. It said, “Perv Duo Desecrates Tate Modern.”

WALSH It seems odd that there aren’t any names in any of the headlines. It’s always just “man,” or “girl” or “thief,” or “Muslim.”

GILBERT That’s how they are. We didn’t change them at all.

WALSH Looking at the works, it strikes me that you are capable of great empathy. You feel for humanity and are trying to capture what its like for an average person living in London. You are trying to memorialize them.

GEORGE In London, but also in New York, or Paris, or Johannesburg. Everyone is stabbing and raping, everywhere you go in the Western world.

GILBERT There is such complexity to life. There are so many layers of existing. It’s not all perfect.

WALSH I read somewhere that you said that each poster moves through your gut. Do the headlines linger in your mind even after the initial shock of seeing them, moving you not only physically, but also sparking your imagination?

GEORGE The poster is just a poster, but the story it tells of what happened in this apartment or that flat is a nightmare beyond our imaginations. When the policemen or policewomen go and tell the lady that her husband has been killed, or the children have been raped and can’t be found, it’s a tragedy that will extend to the workplace, to the school, to the neighbors, to the shops. It’s a tragedy that will extend beyond generations.

GILBERT One takes it for granted. “Oh, it’s just another one.” But we started to think about it. We lived with them for five or six years. [points to another work] Like, for example, “Girl Found Hanged In Wardrobe.”

GEORGE We were just very conscious of it. More than any other picture we ever made, they move through us. We lived them. We breathed them.

GEORGE Some soldiers are only remembered because they had their names on a small piece of bronze. And even that gets stolen and melted down for money.

GILBERT In these pieces, we are freezing time in some ways. Normally, the posters are not frozen in time because they are chucked away the next day.

WALSH I notice that you included an image of a Queen in the bottom of each work. I wonder why you felt the need to include an imperial presence in the midst of so many horrible human stories?

GEORGE She is very important, because we felt that it was such a complex, unhappy venture we went through, that we wanted someone beyond ourselves to preside over the series. Her presence is a reminder that no matter how terrible all of these acts are, they are the price we are paying for our liberties in Western society. If we all want to be free, we have to accept that some people are going to rape, and that some people are going to murder. And the Queen in each work is saying, “It’s a terrible time, but all will be well. It’s ongoing. It’s historical.” These pictures, hopefully, will be as historical as the Queen one day.

GILBERT And every piece has a different image of the Queen. They’re all taken from coins.

GILBERT You never know where money has been. But the coins always serve the same purpose.

WALSH The works have so much sadness and tragedy. Is there anything good in the world today?

GILBERT Freedom. Not one freedom. But rather freedoms in the plural.

WALSH What would they be?

GILBERT Ban religion would be one.

GEORGE If someone could set up a United Nations whose job it was to solely, globally, decriminalize sex.

GILBERT If you could get people everywhere to stop killing in the name of God. Religion is coming alive again. Take Islam, and Sharia Law, which bans nearly everything that’s good in life. In Europe, it took hundreds of years to liberate ourselves from religion. Yet, we feel as though saying nothing to fanaticism is the best solution.

GEORGE Our governments think they must make concessions, because you musn’t ban the traditions of other people. But where does the line come? You cannot say “It’s a tradition to shoot my wife because of what she’s wearing” and get away with it.

GILBERT Sometimes there has to be an end to it. If not, you are going backwards in a big way.

GEORGE We all have conventions ingrained. We don’t all know better. We’re all at fault. We’re all complicit.

WALSH Is there anything so horrible, so unmentionable, that you don’t want to deal with it in your work?

GEORGE We didn’t exclude at all. Maybe the newspapers censor, but not us.

WALSH Ultimately, despite all of this negativity, do you see hope for the world?

GEORGE Always. We’ve always been great optimists. We’ve never been negative. We know traditionally that artists have always been quite critical. We don’t want to be like that.

WALSH What changes do you anticipate in the world in coming years?

GEORGE What a person was like standing in a room 100 years ago was totally different than now. And it must change again.

GILBERT In Europe, all of the people are very privileged compared to 20 years ago. We travel all over the world, day and night. But we don’t realize how privileged we are.

GEORGE We are the first generation to travel without going to war. My parents and grandparents traveled only to fight.

GILBERT And you see the result of it everywhere! You only have to go downtown in Manhattan, and look at the variety of food you can eat. So it’s not so bad!

GEORGE What about the handbags women carry? They are endless!

GILBERT So many different handbags!

WALSH But with all of this privilege, have we gotten lazy? Is there more to critique?

GEORGE I think the “London Pictures” remind people of the price of freedom. You can’t only have the handbags and 20 different cuisines. There’s always a price. People should come to the show to be reminded of that.