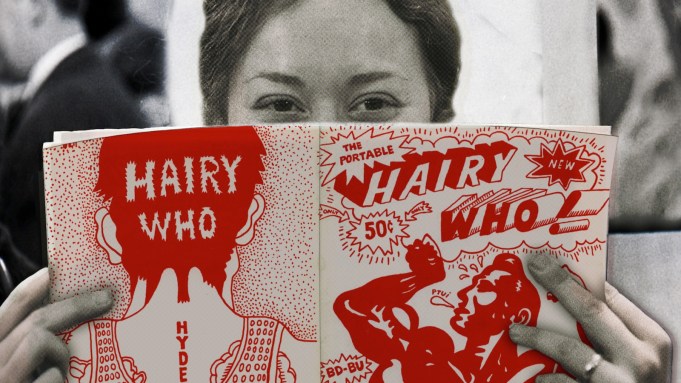 Who doesn’t love the Hairy Who? That’s the implicit message of Hairy Who & The Chicago Imagists, a new documentary film directed by Leslie Buchbinder, the daughter of Chicago collectors Henry and Gilda Buchbinder.

Featuring some 40 interviews plus archival footage and animation, the film makes a compelling case for the continued relevance of the Midwest’s merry pranksters. It also faces head-on the question of whether the artists’ resolute outsider stance, along with their second-tier base of operations, will inevitably relegate them to footnote status in postwar American art history.

Known for their raw imagery, “low” sources, technical skills and rejection of New York, abstraction and any hint of slick or cool (show titles include “Don Baum Says: ‘Chicago Needs Famous Artists'” and “Surplus Slop from the Windy City”), the artists were fiercely championed by Chicago critic Dennis Adrian, and, in many cases, marketed in both Chicago and New York by gallerist Phyllis Kind. By 1973, they had attained global recognition, with the 12-artist show “Made in Chicago” representing the U.S. at the São Paulo Bienal before an extensive international tour.

Now that Buchbinder has launched an archival Chicago Imagist website, A.i.A. caught up with her by phone and e-mail to get her personal take on the wily band of outsiders.

RICHARD VINE What was the Chicago Imagists’ key contribution?

LESLIE BUCHBINDER While many American artists struggled to diverge from European predecessors, the Chicago Imagists were free from that Oedipal crisis and far from the klieg lights that shone on New York artists. They influenced people like Jeff Koons, Peter Doig, Amy Sillman, Kerry James Marshall, Sue Williams, Chris Ware, Gary Panter, Aaron Curry and many more—some of whom found the focus of the New York School dry and uninspiring.

Basically, the Chicago Imagists embraced the then-verboten: figuration; the personal, the theatrical and/or narrative; the grotesque; and comedy ranging from dark and sinister to high-octane hilarity. Their art is passionate, not dispassionate. They unabashedly showed their hand—via their drawing acumen, subject matter and frank subjectivity. They heeded neither Clement Greenberg’s Flatland ethos nor Michael Fried’s “no more drama” dictum.

VINE There’s also a tension between the rawness of their subject matter and the refinement of their techniques.

BUCHBINDER Yes, the work is informed by comics, folk art, pinball machines, tattoos, circus posters and more. At the same time, Imagist works are exquisitely crafted. Their colors are vibrant, and their pictures celebrate the lurid, calamitous, scatological and freakish.

BUCHBINDER Reactions have always been varied. But the pendulum seems to have swung back in their favor, especially among younger artists, who view the Imagists as prescient in regard to today’s zine scene, art-comics and DIY culture. In 2012, for example, Chicago’s DePaul Art Museum presented “Afterimage,” an exhibition featuring 24 young artists who draw inspiration from the Imagists.

VINE You grew up around these artists. From their work, one might expect them to be a pretty wild bunch. What was your experience?

BUCHBINDER Though they had raucous, fun parties, their art was the place they invested their wildest selves. Handmade costumes enlivened their openings, as did convivial humor; but these artists eschewed the drug and sex cultures then dominant in New York and L.A.

VINE What was the biggest surprise in your filmmaking process?

BUCHBINDER The greatest discovery was how many international artists they influenced—for example, when Peter Doig discussed how galvanizing the 1980 show “Who Chicago?” was for him as a young art student at Central St. Martins art school, in London. Koons and others also cited very specific, formative revelations.

VINE Did you come to see their social significance any differently in the course of making the film?

BUCHBINDER Their social significance has as much to do with how they created their art as with what their art is about. At a time when gender bias was rampant in New York and L.A., artists like Christina Ramberg, Gladys Nilsson, Barbara Rossi, Suellen Rocca and Sarah Canright shared the limelight. Rob Storr says in his interview: “I don’t know whether that’s really been said strongly enough, but a lot of the stuff that people think of as the brave new world of post-modernism, and women playing leading roles, was here, in Chicago!”

Screenings will take place in America and the UK this fall; the film will have its television debut in November on WTTW-TV Chicago (date TBA).

UPDATE: This interview has been amended since its original publication. It erroneously identified Christina Ramberg as being included in the original Hairy Who group.

Watch: This New 97-Foot Luxury Yacht Has the Sleek Silhouette of a Shark