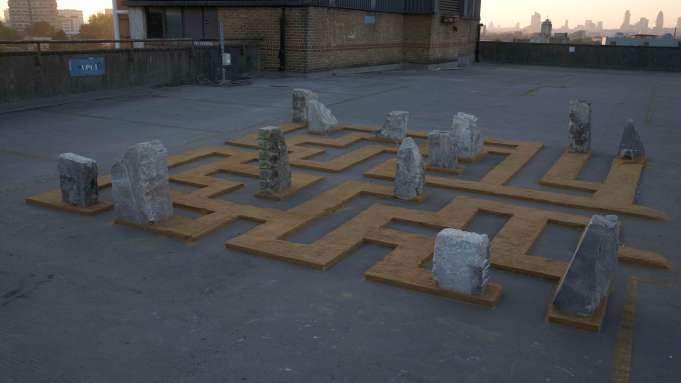 Peckham in South East London has been quietly thriving on a reputation of seedy crime, derelict Victorian housing projects, and invaluable discount stores. Nothing in this decaying part of London ever suggested that this indeed was going to breed a young art scene, particularly one to challenge the domination of now-glamorous Shoreditch. But so it goes, and cafés, boutiques, real estate investors are sprouting up everywhere.  The Hannah Barry Gallery is at the forefront of this charge to creative gentrification. Her gallery was invited at this year’s Venice Biennale: winkingly, the Peckham Pavillion occupied a particularly un-touristed location amidst fishmongers and trattorias, great shades of its London location. By and large, visitors didn’t understand the name, but Hannah Barry had officially succeeded in putting Peckham on the international art map.

In London, it’s Barry’s gargantuan (in variety, and the size of the work therein) sculpture shows have attracted a lot of attention, critical and uncritical, as has her overall approach to her shows. Hannah Barry (b. 1983, Kent, United Kingdom) founded her eponymous gallery in 2008, in a warehouse adjacent to artist studios and faith group meetings. “It felt like a blank canvas, I didn’t want to work in the context of something else,” says Barry, declaring a generational sentiment, and a motive “to create a system of opportunities for art that hadn’t be shown before.”

Today, with partner and co-curator Sven Mündner (1978, Hamburg, Germany), the two Cambridge art history graduates put up between 15 and 20 shows each year, of young, often local artists. Each exhibition combines works by two very different artists. Take this year’s July show, “The Oil Fields,” which comprised “Skidder and Extenda-Claw,” gigantic, forklift-like engines constructed by South London artist James Capper, who was awarded the Jack Goldhill Award for sculpture at this year’s Royal Academy Summer Exhibition. The audience was encouraged to try and drive the machine and manoeuvre the front part towards the ground in order to scrape the floor, as if marking one’s territory. Capper’s machines were match with the disorientating, geometic jungle of Rob Sherwood’s paintings, who was nominated this year for the Jerwood Contemporary Painters. There is something of Mondrian’s iconic Broadway Boogie Woogie (1942) there, a view of the gigantic city driven by rhythm and chaos, which links it to the monumental sculpture. (BARRY AND MUNDNER, PHOTO BY VIKTOR TIMOFEEV)

Barry and Mündner are currently showing their third annual sculpture show “Bold Tendencies III.” This grandiose exhibition is held on the rooftop of an unused, ten-story car park behind a derelict Woolworth’s. The wide, uncluttered space offers a concrete and open sky, and a contrast with sculpture gardens by way of entropy and natural overgrowth.

James Balmforth’s “Failed Obelisk” is a monument of said shape with a detached apex hanging off a spring, offering a jokey toppling of mythical authorities, symbolic labor, and architectural standards. Molly Smyth’s “Motion Towards Collapse” also involves themes of decline and fall. It appears as a giant ruined temple, part Mayan, part Playmobile, all in gray brick. In British landscape architecture and Neoclassicism, there’s a specific history of pre-ruined structures, exemplified by Wimpole’s Folly, a ready-ruined Gothic Tower in Cambridgeshire.  “Who would have thought cement blocks could have such a human quality?” asks Barry of Smyth’s insertion into the tradition.

Bold Tendencies III is on view through Septemper 30. The off-site exhibition is located at Level 10, Peckham Rye Multistory Car Park, 95A Rye Lane. Hannah Barry Gallery is located at Warehouse 9i, 133 Copeland Road.