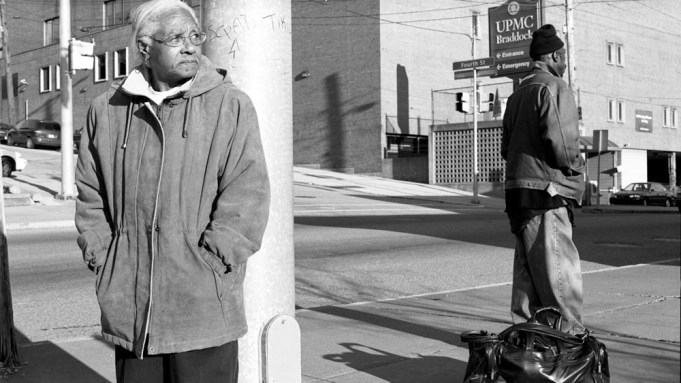 “A Haunted Capital,” LaToya Ruby Frazier’s first New York solo exhibition, opens Mar. 22 at the Brooklyn Museum. Frazier’s work, addressing her hometown of Braddock, Pa., near Pittsburgh, has taken many forms as she has moved from photography to performance, documentary to activism. She is known primarily for black-and-white portraits of herself and her extended family.

A recent graduate of the Whitney Independent Study Program, in New York, Frazier has had her work included in the recent New York survey museum exhibitions “Generational: Younger than Jesus” (2009), PS1’s “Greater New York” (2010) and the Whitney Biennial (2012). Frazier was appointed critic in photography at the Yale University School of Art in 2012. She is a recent recipient of a Creative Capital visual arts grant, and she has upcoming solo exhibitions at the Contemporary Arts Museum Houston and Galerie Michel Rein in Paris. She divides her time between Braddock, New York City and New Jersey.

In conversations in the author’s Greenpoint, Brooklyn, studio in January, A.i.A. spoke with Frazier about the newest developments in her work, as well as what it means to have a solo exhibition at the Brooklyn Museum.

GREG LINDQUIST Your work is often compared to the black-and-white photography of Dorothea Lange and Walker Evans. You name Francesca Woodman and Frida Kahlo as inspirations for your intimate portraiture of you and your family. Are there any contemporary artists who have influenced you?

LATOYA RUBY FRAZIER There are four contemporary artists whose works speak to me and inspire my practice: Abigail DeVille, Coco Fusco, Alfredo Jaar and Walid Raad. All four of these artists poignantly confront blind spots in collective memory, they interrogate historical amnesia, they make visual and social representations of invisible realities and their work is heavily research-based.

LINDQUIST How have the Pictures Generation and mass media manipulation been touchstones for your work?

FRAZIER For me the Pictures Generation artists created a public consciousness to resist mind control and mass media manipulation. These artists were aware of how television, radio, film, advertising, popular culture and magazines dictated views about race, class, gender, sexuality and citizenship. Our inability to distinguish advertisement and entertainment from reality is what makes us susceptible to propaganda that promotes racism, classism, nationalism, militarism, sexism, imperialism and colonialism.

LINDQUIST So, advertising is central?

FRAZIER In 2010, the advertising agency Wieden+Kennedy and Levi Strauss & Co. launched a global campaign, using my hometown as its backdrop, to promote the lifestyle and ideology of hipsters colonizing communities like Braddock, which have been abandoned by local governments. What this campaign omitted was the fact that Braddock is a 13-block-wide industrial town polluted by toxic industries on top of land mostly occupied by elderly, working-class, single-parent-household African-Americans.

Under these circumstances, how can Braddock be a “new frontier”?

The campaign also used slogans such as “We Are All Workers” and “Everybody’s Work Is Equally Important,” but Braddock’s largest employer and only healthcare provider, the University of Pittsburgh Medical Center, closed in 2010, leaving many locals jobless and without healthcare.

When work disappears and cultural capital flows from agencies and corporations (like Wieden+Kennedy and Levi Strauss & Co.) to non-profit organizations in Braddock that do not have the public’s interests in mind, people will be developed out of their homes and neighborhoods.

LINDQUIST I was surprised, in an earlier conversation, when you mentioned Dutch painting as an influence, in particular Vermeer’s depiction of women. How has Dutch painting affected your work?

FRAZIER I have a reverence and respect for painters. We know that the first photographers, before film existed, were the painters who used the camera obscura as a tool. Of course there are debates about whether Vermeer used a camera obscura. But what immediately grabbed my attention in his paintings is that practically all of his works are domestic interiors with women as the central character. For 20 years, Vermeer painted women in one corner with one window, with dignity and equilibrium. Their body language and gestures convey larger social and cultural meanings.

All these ideas are conveyed in my portraits of my mother and grandmother. The only difference is we are in a period of turmoil and industrial collapse. We remain steadfast although our bodies are deteriorating along with our land. Concepts of family, privacy, intimacy, comfort and luxury are as present in my portraits as they are in Vermeer’s paintings.

LINDQUIST How do you continue to push your work forward?

FRAZIER My mentor and teacher, Kathe Kowalski, taught me to listen to my work. She always told me, “When your photographs start speaking back to you, that’s when you know you’re making the right work.” I follow where the work guides me. It recently guided me to the W.E.B. Du Bois Library at University of Massachusetts Amherst, where I have been commissioned to collaborate with a Du Bois scholar to create new work that investigates Du Bois’s influence on American social justice, women’s rights, higher education, the arts, environmentalism, and political action.

LINDQUIST Why have your first New York solo show at the Brooklyn Museum?

FRAZIER Because the Brooklyn Museum creates exhibitions for its local community. Many of the problems that Brooklyn faces are similar to those in Braddock, such as gentrification, urban renewal and the resulting displacement of black or Latino populations.