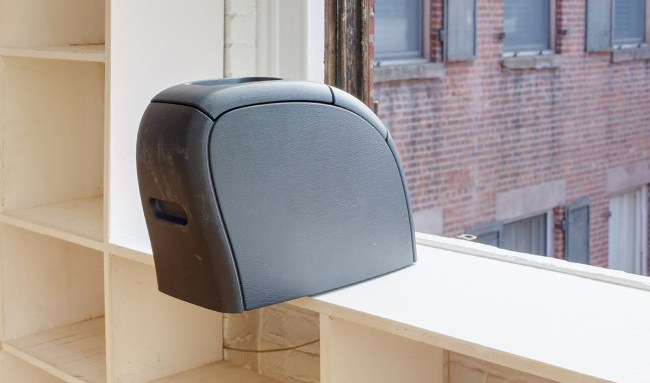 Human skull fragments adorn defunct Mac laptops resting on emptied bookshelves along the wall. A freestanding between-seat storage console (where you might find an ashtray or a cup holder) of a Chrysler Town and Country is mounted on a rotating platform on a large windowsill. Colored pipes form a rainbow resting on the tub in the gallery’s bathroom—a space that is not normally open to the public. The gallery’s wall and floor space are almost completely uninterrupted.

“It’s interesting to leave the gallery space voided that way,” the Detroit-born, New Hampshire-based artist, 36, explained in a recent phone conversation. Uninterested in the standard gallery setting, Smith seeks to display his objects in spaces that are often overlooked and underappreciated. “There’s  all kinds of really nice peripheral material that orbits most white cubes, like bathrooms, hallways and ceilings,” he explained. Use of these spaces is an integral part of his work. “When I get in the space and I am forced to deal with a deadline, I find solutions in the space based on place or parts of the architecture that humans come into contact with or functional elements of the architecture. Each work is installed against some functioning element of the architecture.”

Smith’s intentions are also practical. “It’s hard to find a bathroom in New York, so I assume that most people that make it to SoHo will wash their hands or take a leak at least.”

Propping open the gallery door is the small, comical Mike (2013), a faceless creature comprised of the feathered skins from two chickens covering a mannequin head. Mike received its name after it had been installed. Smith explained that “an accumulation of Mikes”—Michael E. Smith himself, in addition to gallerists Michael Clifton and Michael Benevento—”built like a noise in the back of my head.” The dealers and artist both noted, in conversations with A.i.A., the work’s resemblance to Mike the Headless Chicken, a real-life 1940s rooster who reportedly managed to survive for 18 months after his head had been cut off.

The artist acknowledged, in response to the suggestion that some visitors might feel they were missing something, that the show could appear inscrutable. But, he says, “The idea is not to hide things. That would be annoying.”

‘Fight the Power’ Misses How Mainstream Rappers Became the Power