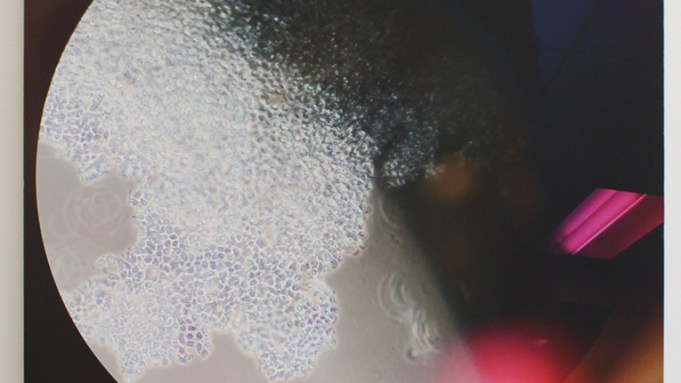 Heather Dewey-Hagborg investigates issues of privacy, vulnerability, and consent at a time when our bodies are becoming less and less our own, as DNA is increasingly gathered and sold by biotech corporations. The Philadelphia-born, New York-based artist, who received her PhD in electronic arts from Rensselaer Polytechnic Institute in 2016, uses laboratory equipment and procedures as well as consumer technologies in her work. For Probably Chelsea (2017), she interpreted the DNA of former Army intelligence analyst Chelsea Manning—imprisoned for supplying classified security data to WikiLeaks—to make 3D-printed portraits, while her Stranger Visions (2012–13) was derived from hair and saliva found in public places. Her exhibition “At the Temperature of My Body,” on view at Fridman Gallery in New York through August 9, presents a four-channel video and two installations: Spirit Molecule (2018–19) is an ongoing experiment with plants that grow in the gallery, and Lovesick (2019) comprises photographs of a virus engineered by the artist taken through microscopes. (Spirit Molecule is also featured in a concurrent exhibition at the Eli and Edythe Broad Art Museum at Michigan State University through September 29.) Below, Dewey-Hagborg discusses her engagement with biotechnology as material and metaphor.

Spirit Molecule is about new forms of mourning mediated by biotechnology. I’m working with artist and botanist Phillip Andrew Lewis to create genetic memorial plants. We’re using the DNA of lost loved ones to create legal psychoactive substances that alter moods, perception, or consciousness. We’ve set up a living laboratory in the gallery. Over the course of the exhibition, we’re conducting experiments with DNA from Phillip’s grandmother. The DNA is inserted into various plants growing in the gallery: tobacco, morning glory, and passion flower. We’ve been working with scientists including Sebastian Cocioba—a New York-based researcher and biohacker who advocates for accessibility to biotechnology—who transform the plants with DNA.

I started working in molecular biology in 2012. I was very lucky; I had the idea of working with strangers’ DNA that I found on the street, and realized a community biohacking lab called Genspace had just opened down the street from me in Brooklyn. I took a crash course in biotechnology and learned how to extract, amplify, and analyze DNA. I worked with scientists at Genspace to develop my first bio art project in 2012.

The photographs that are part of “Lovesick” lead us into the virology lab. They show both cells and the apparatuses that produce the images. We see close-up images of cells that appear red under a fluorescence microscope, as well as cells seen under a bright-field microscope. The lab itself is reflected in the microscope in the shot titled Jurkat Cells Brightfield 40x Magnification and Eyepiece Lens. I took many of the photos by just holding my iPhone up to the microscope. Some are done with other attachments, but the ones I found most fun and improvisational are the ones I took with my phone. Typically, one would want to avoid the laboratory reflection; standard images are recorded in black-and-white, then colorized.

There are different things scientists would look for in these images. In HEK293 Producer Cells Expressing RFP 400x Magnification, we see good news: a big, bright clump of fluorescent cells indicates that my “Lovesick” experiment is working. For this project, I engineered a human retrovirus with a company called Integral Molecular; the virus infects human cells with a gene to produce increased oxytocin, the hormone released when you cuddle, pet your dog, or breastfeed. I hope that this viral process may help fight against hate and alienation. It’s an affectionate, bonding hormone often associated with monogamy. When you see a red glow in the images, what you’re seeing is an expression of the oxytocin. The titles of the photographs follow the style of captions in a scientific paper.

Glass forms sitting atop two pedestals contain the virus itself. The forms come from computational models of the oxytocin molecule. I’m showing two states of the virus. One is under blue fluorescent light and glows pink-orange. The other is shown in its standard state, in normal light. Scientists always look at these cells under two different lights. First they look through the bright-field microscope to see all the cells. Then they turn on the fluorescents to see only the cells expressing oxytocin.

There are two videos of round cells mounted up high that evoke rose windows, while audio plays voices chanting the amino acid codes, making the area a chapel-like space. I’ve been thinking about new forms of spirituality coming out of biotechnology. The virus changes your DNA forever, so I think there should be some kind of ritual to accompany its ingestion. I can imagine people breaking open the glass, swallowing the virus, and chanting these letters as their DNA changes.

The title of the exhibition, “At the Temperature of My Body,” is a quote from my four-channel video T3511 [2018], made in collaboration with artist and filmmaker Toshiaki Ozawa. It tells the story of a biohacker who purchases an anonymous donor’s saliva online and then sends it to a direct-to-consumer genetics company like 23andMe. The biohacker starts profiling the donor, eventually finding their Facebook profile and growing increasingly obsessed. When I worked with Chelsea Manning’s DNA for Stranger Visions, I found the process surprisingly intimate, even though we’d never met. This encounter inspired T3511, which also points out that we are all rendered increasingly vulnerable in the biobank: if anyone related to you used a DNA website, then you’re in the database by proxy.