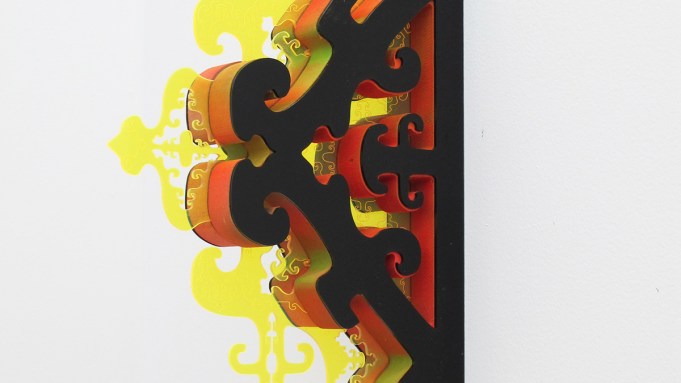 Combining digital image-making with motifs of mysticism, the work of artist Brenna Murphy blurs ancient traditions and the bleeding edge of technology. In her latest exhibition, at Brooklyn’s American Medium (through Nov. 23), the virtual spaces in which her work is composed enter the gallery space through a series of digital prints and MDF and plexiglass sculptures. Murphy, who lives in Portland, Ore., works with 3D graphics and video game development software to construct psychedelic, labyrinth-like worlds that evoke the cryptic visual forms of ancient civilizations. These worlds are then photographed and printed, or otherwise rendered into three-dimensional objects via computer-aided fabrication. Murphy suggests that such advanced software and hardware technology function as “contemporary folk art tools,” enabling us to close the gap between imagination and reality.

She took a break to talk to A.i.A. by Skype about the state of the digital commons and possible links between the technological and the spiritual.

TIM GENTLES Can you talk about the relationship between virtual platforms and physical space in the exhibition?

BRENNA MURPHY That’s really important for me. My work is kind of all about building pathways between virtual and physical realms, because I feel like strengthening my approach to each of them gives me a broader perspective on both. By building a physical space in a virtual world, I can then approach building a physical sculpture in a physical world with this sort of hyperspace approach.

GENTLES How has your interest in negotiating a physical/virtual divide developed over time?

MURPHY At first I was making a lot of sculpture installations with found materials only. I would use dirt and eggs and things from around, and simultaneously I was working on the computer a lot, doing digital collages with found images. Those were very parallel practices but they didn’t overlap much. When I got into 3-D computer modeling, that became my avenue into combining the worlds. I started to think really sculpturally in the computer and then I was able to actually bring those designs into the physical world through digital fabrication, as well as human fabrication.

GENTLES Can you talk about your use of materials and how this corresponds to your desire to make a folk art out of digital tools?

MURPHY I’ve found plexiglass and wood to be most accessible and useful for digital fabrication. I’ve used foam in the past and I don’t like it much because it creates a lot of waste. I’m really attracted to the plexi because it has a hyper-object kind of feeling—it’s not of this world, almost.

GENTLES Do you see advanced technology as enabling something like a “digital commons,” or do you imagine a more spiritual future for humanity’s relationship with technology?

MURPHY I think developing technology relates to the structure of human consciousness no matter what. So in trying to think about how it will shape itself in the future, I think it has to do with inherent structures of human interaction. I really like to think of this as hopefully being some kind of utopic digital commons, where we can use our connectivity to transcend our current state and bring a more advanced outlook to our place in the world. Right now it feels like the digital commons is owned by an evil corporate whatever—but I don’t think it necessarily is that way even right now. If we look at it from a different perspective, we are all connected, and we can use that however we want.