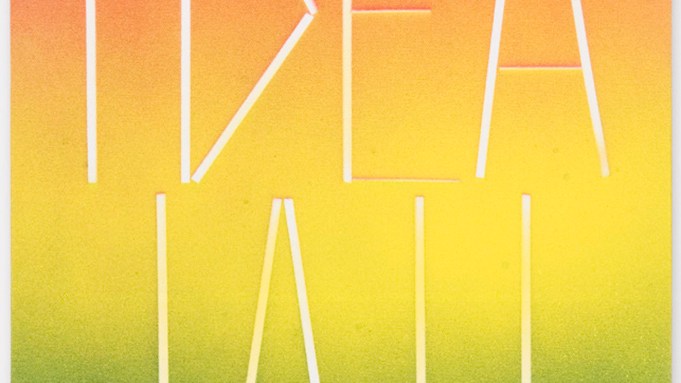 Multimedium artist Scott Reeder is known for a wry use of humor that incorporates both art-historical references and silly jokes. Providing ample quantities of both is his first solo exhibition with New York’s Lisa Cooley Gallery, “People Call Me Scott” (through Dec. 22).

The Detroit-based painter, filmmaker and sculptor creates widely varying work, ranging from representational canvases to reductivist sculpture to paintings made by spraying paint onto a canvas on which he has scattered pieces of pasta.

Included at Lisa Cooley are canvases with handwritten lists, such as Alternate Titles for Recent Exhibitions I’ve Seen (“Indoor Street Art” and “Painting Is Dead, But These Paintings Are Still Available” are two) and an aluminum floor sculpture made to look like crumpled paper, called Bad Idea (both 2013). Another series of 30 small paintings each features a combination of two words of four letters each in ambiguous combinations like “IDEA JAIL,” “JPEG LIFE,” and “POST GOOD.”

Reeder also encourages connections between groups of artists through events and curatorial projects. He and his brother Tyson, also an artist, have curated shows at New York gallery Gavin Brown’s Enterprise, and organized the Dark Fairs, independent art fairs in Cologne and New York, where the art was illuminated only by flashlights and candles.

The artist recently spoke with A.i.A. by phone about the conflict between humor and reverence, and about some upcoming projects.

NOAH DILLON Your use of jokes has sometimes been characterized as “mocking” and “sarcastic.” How do you think about humor in your paintings?

SCOTT REEDER Humor’s hard to talk about because if you try to deconstruct why something’s funny that always kills it. I don’t usually start off with the intention of being funny. I’m more interested in just not being boring. Whether it’s funny or not, I’m definitely interested in a kind of extreme reduction, understatement or deadpan—in making something really pithy.

DILLON Maybe part of the difficulty in talking about humor in art comes from a tendency to put art on an exalted plane?

REEDER Yeah, art is on an exalted plane for artists, but comedy is probably on a pretty high plane for comedians. Things have just been getting funnier since Duchamp. Many people have accepted the idea that art can be absolutely anything, but they might still think it shouldn’t be funny.

My idea of humor is probably kind of strange, too. I think the work of John McCracken and Blinky Palermo is funny. It’s a little aggressive to the viewer so you’re not sure how to receive it or how much investment to put into it. Something of the same goes for my curatorial projects: the Dark Fairs we did in Cologne and New York are wacky and challenging but also sensitive and reverent.

DILLON Can you talk about the process of making the text paintings?

REEDER My work almost always starts with language. The pasta paintings came from me writing “pasta paintings” and then figuring out how to make a mark with pasta. The new paintings came from this long collection of words that I kept moving around until something resonated. I’m interested in just letting the titles exist without an image, which lets viewers complete the work. For instance, Mood Hole (2013) is a visual cue, but I don’t know what it suggests.

DILLON This show incorporates the various elements of your practice freely; I get the sense it’s important that all those things are taken as a whole.

REEDER Some of my favorite artists have really expansive practices: Martin Kippenberger, Warhol, and especially Sigmar Polke, with his movement between imagery and abstraction. I got excited about this show because it was more maximal for me. It pushes the disparate parts of my work into one place.

DILLON What upcoming projects are you working on?

REEDER I’m working towards a show in L.A. at 356 S. Mission Rd., which will open in late January. I’ve been working on a feature-length movie called Moon Dust, about a failing lunar resort, for the past eight years. Everything’s handmade-looking, and all the actors are amateurs. I’ve still got about 10 percent to shoot, so I’ll build sets and shoot the final scenes there, with a screening in February. David Lynch’s first film took seven or eight years, so if I can finish soon I’ll be right on schedule.

Audemars Piguet Will Launch Its Own Certified Pre-Owned Program This Year, CEO Says