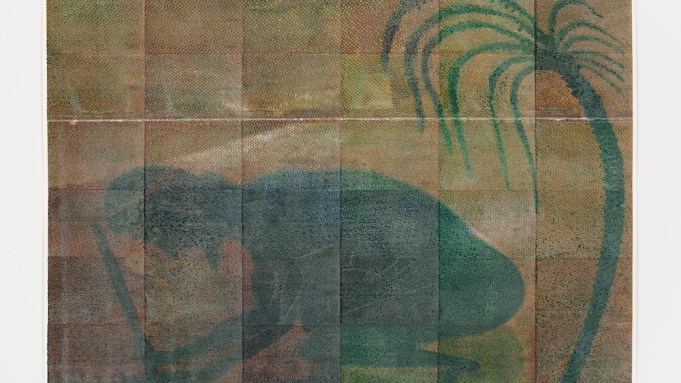 Even though the objects on view are all made with modern-day industrial materials such as concrete and metal, walking into “All industrious people,” an exhibition by Justin Matherly at New York’s Paula Cooper Gallery (through Apr. 27), feels something like entering a show charting an archaeological dig at an ancient site. Consisting of seven inkjet monoprints and one monumental concrete sculpture mounted upon a gaggle of metal walkers, the show largely derives its inspiration from Nemrud Dagi in Turkey, an excavated temple-tomb devoted to King Antiochus I, a Hellenistic emperor who ruled in the third century B.C.

The prints, which look like pointillist renderings of Martian landscapes, are highly blown-up details of images of the area surrounding the site. The sculpture, which is 24 feet long and 10 feet high, replicates a commemorative stone relief found there. Handbook for inner culture for external barbarians (we nah beg no friend), 2013, depicts Antiochus shaking hands with deities who are welcoming him into the kingdom of the gods. The piece would have the look of a weather-worn stone relief were it not for the walkers—with them, it almost seems like an arachnoid being that might, despite its obvious weight,  scamper out of the gallery at any time.

Matherly, who lives and works in Brooklyn, received his BFA from the University of Pennsylvania in 2002, and his MFA from New York’s Hunter College in 2007. This is his first solo show at Paula Cooper; previously, he has exhibited at Marginal Utility in Philadelphia and Bureau in New York. A.i.A. met with him in his studio to discuss the exhibition, which is bursting with a trove of ideas that are only hinted at in the works themselves.

BRIENNE WALSH Your sculptural works, the most recent one at Paula Cooper included, are monumental masses of concrete that start as boards of Styrofoam. How do you arrive at the final results?

JUSTIN MATHERLY Each work starts with a drawing, taken from a photograph of the object I’m copying, on a flat piece of foam, which is charted out to get the maximum dimensions. Then I glue pieces of foam together to create a block, and carve these blocks down. If too much material is taken away, I build back on and start over.

WALSH The way you carve reminds me of Renaissance masters carving away at blocks of marble, only you are carving modern industrial material.

MATHERLY Well, I cheat a little because it’s easy to replace sections or re-carve them. But a lot does emerge from the material when I’m figuring out the form. Because most of my work starts with a two-dimensional photograph of a three-dimensional site, there are a lot of areas that aren’t visible in the image that create themselves in a way. If you follow the logic of the work, you come to know the object in a different way, which is incredibly satisfying. Each subsequent step becomes sort of removed from the original source, and from me.

WALSH After you carve the foam, you cover it in strips of Treegator, plastic sheets that are wrapped around trees to keep them irrigated, thereby creating a negative mold from the positive form. How did you decide to use Treegators?

MATHERLY I guess I just started seeing them a lot in New York City. They seemed to serve a similar function to that of the walkers and canes that I also use-they are a prosthetic that allows the tree to grow, in the same way that walkers allow people to move around. In a way, they’re ambulatory aids that service the idea of perpetual motion.

WALSH What do you mean by perpetual motion?

MATHERLY It all connects to metempsychosis, which is a Greek theory about the reincarnation of the soul after death. In my work, there’s a breakdown of forms into other forms-nothing ever really stops. The walkers also help on a practical level by making the sculptures portable. The sculpture at Paula Cooper is made up of 120 pieces, and each piece is between 50 and 100 pounds.

WALSH  Once the Treegator mold is finished, you start the last stage, pouring concrete. Why concrete?

MATHERLY Because of its fluid nature. The concrete allows me, as much as possible, to let the materials be what they want to be. This part of the process is also the most disconcerting, because a lot of decisions have to be made really quickly, and the final form is sort of out of my control.

WALSH  The sculpture in the exhibition is joined by seven prints, which you make by transferring wet transparencies onto sheets of paper in single layers of CMYK colors-cyan, green, magenta, red and yellow. Why this method of printing?

MATHERLY At first it was a quick way to print something larger in the studio. But then it became about removing my hand from transcribing the image—my hand felt like a limitation.

WALSH  The prints are blown-up images of the outlying areas surrounding Nemrud Dagi, but they seem sort of like they’re from outer space.

MATHERLY Yeah, the landscape around there is insane—it’s incredibly desolate.

WALSH  Have you ever been there?

MATHERLY No, I went through a book of the site, and chose the most in-the-distance, non-descriptive images. Then I scanned very small parts of these larger images so that the details are super blown-up-the pixels become very large. There’s this scene from a Mel Brooks movie, High Anxiety [1977], in which the characters think they see something in a photograph that will lead them closer to solving some mystery. But they need to blow it up—eventually, it’s the size of a side of a building. The film riffs on many movies—this scene riffs on Michelangelo Antonioni’s Blow Up [1966].

MATHERLY In both the sculptures and the prints, there’s a sort of removal. In the prints, a section of the image is printed out on a transparency, and then burnished into the paper. It’s very manual. They are printed on smooth transparencies, so the ink is still wet—there are so many variables having to do with the ink, with how a color adheres to the transparency, with the layering, and with the registering. I always attempt to get it perfect, but it doesn’t turn out that way.

WALSH  Much of your past work references ancient art—you’ve done pieces based on the Belvedere Torso, for example, and the Juno Ludovisi head. What appealed to you about the dexiosis motifs on Antiochus’s stelae?

MATHERLY What brought me to the dexiosis reliefs was thinking about the Laocoön sculptures. In a lot of ways, they are a lot about arms—they were discovered almost perfectly intact, with only three arms missing. But many of the copies were inverted so that the left arm rather than the right arm was missing. Then there’s an image of Bob Marley with Edward Seaga and Michael Manley—the two leaders of the warring political parties in Jamaica in the early 1980s. Marley brought them on stage and had everyone grasp hands. I really love the image—it was the interim between the Laocoön and Antiochus’s deification.

WALSH  In what way?

MATHERLY Well, first of all, dexiosis means “right hand clasp.” In the original relief, the carving shows Antiochus grasping his right hand with that of the gods, but in the sculpture, I inverted it so that they are shaking left hands. In that way, the sculpture ends up referencing both the grasping hands in the Marley photograph and the inversion of the arms in the Laocoön.

WALSH  Although many of the works in the show are untitled, some bear names that offer clues as to the influences that went into the work.

MATHERLY Titles are a way of directing, or misdirecting a viewer. I usually have titles around for a while before using them and check in every once in a while to see how they stand up. So, for instance, the title Handbook of inner culture for external barbarians (we nah beg no friend) is a quote from On the advantages and disadvantages of history for life, by Nietzsche, which has been one of the main texts guiding the work recently. The second part is a popular expression in Jamaican dancehall music. My love of dancehall music led to a broader interest in Jamaican history and politics.

WALSH  The walkers that form the base of the work are bound together by red and green zip ties. Do they serve more than just material roles?

MATHERLY The zip ties are in the colors of the Pan-African flag. They tie into a larger interest in Africa (and Ethiopia more specifically) as the “motherland,” where all things originated and where all things will go to die. They are meant to suggest this but are also, for now, meant to just sit there with nowhere to go for the moment, if that makes sense.

WALSH  Not all of the references we talked about are available to the average viewer. Is that intentional?

MATHERLY It’s always been an issue for me to talk about what goes into the work. If you talk about the specific elements, you only give a partial picture of the whole. But the way the sculptures are made, they retain some traces of their history. I think there’s enough available on the surface that an opening is set up for viewers to delve further, if they so desire. More than anything, I want to make things that can’t be ignored.

These Laser Tag Guns and Sets Bring the Arcade Home