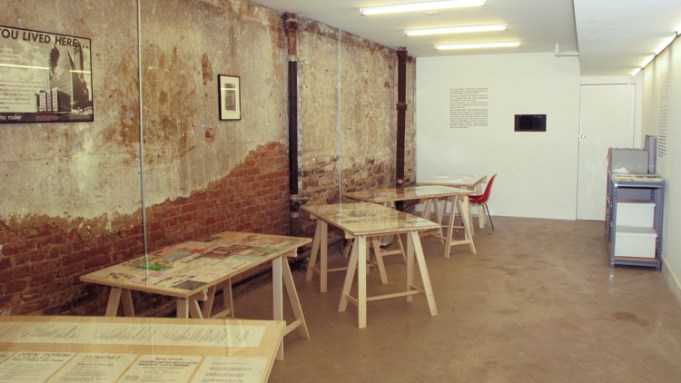 In 1989, Martha Rosler organized “If You Lived Here…,” a major multi-part project on homelessness and housing at the Dia Art Foundation. The cycle of three exhibitions placed film, video, photo and poster works alongside graphs, charts, billboards and hand-painted slogans-such as the infamous Ed Koch quip, “If you can’t afford to live here, mo-o-ve!” More significantly, Rosler planned an extensive series of public events ranging from Town Hall meetings to poetry readings.

Twenty years on, the project remains a touchstone for art that engages social activism and discursive formats. e-flux is currently hosting Rosler’s archive project “If You Lived Here Still….”: a selection of documents, photographs, videos and slideshows that reveal the original project’s extensive organizational armature and bring it up to the present through images from subsequent presentations and a wall of material from current activist and advocacy groups. (LEFT: © MILA ZACHARIAS AND E-FLUX)

MEDIA FARZIN: Can you tell me about the original project, and how it happened?

MARTHA ROSLER: Dia had invited me to do a solo project, and I chose homelessness as the subject. This was 1988, and homelessness, as a social fact, had suddenly appeared as if from nowhere. I gradually realized that there were many artists already working on this, so it made little sense to produce a solo work, at a venue known for encouraging, even coddling, individual geniuses. I put out a call for artists and went on a hunt for academics and activists, with [artist and urban scholar] Dan Wiley.

The project had to embed questions of homelessness in the social fabric; a show focusing on “homelessness” tout court would simply be that two-edged sword, a call for liberal guilt. What are people doing to keep their homes, what happens when they fail? We wanted to include urbanist solutions to the problem-to explore it as a complex rather than a straightforwardly obvious, negative social reality. I had one rule: no images of people lying on the ground. (The one exception turned out to be a bus poster that was part of a project-called, satirically, LA’s Official Housing Project for the Homeless-by Robbie Conal and his students at Otis Art Institute.)

FARZIN: How did this “archive project” at e-flux come to pass?

ROSLER: This is mostly for Anton, the “curator,” to answer. But I would suspect that the thinking is that the “back story,” as with my e-flux library project, has much to offer-not only the amount of “networking” and negotiating involved but also the contents of the files themselves. (LEFT: INSTALLATION VIEW AT THE EFLUX SPACE. PHOTO BY MARTHA ROSLER)

ANTON VIDOKLE: I never saw the original project at Dia. It was not at their main building and I don’t think they publicized it too much. I knew and was curious about this work because a couple of years ago I invited Nina Möntmann, a German art historian and curator, for an informal lecture in the context of another project we did, Martha Rosler Library. Nina had written a book, a chapter of which deals specifically with If You Lived Here…, and her discussion of it during her talk was so interesting that I wanted to pursue this further. I asked Martha a couple of times to include material on this project in public panels and conversations I organized, and at a certain point she told me that there is actually an archive pertaining to this project at her house.

So early this summer I went to her house, and we located five boxes of papers in storage. One of the first documents I saw was a letter from Charles Wright, Dia’s director, which was absolutely fascinating-and so I asked Martha if she would like to present the archive to the public at e-flux…

VIDOKLE: Probably ninety percent of the archive’s contents is new information, in the sense that the material was not a part of the exhibition at Dia. It contains correspondence with the many participants of this project, Martha’s research, all sorts of background material that normally is not included in presentations, but is what a work or a project is developed from.

FARZIN: The title, “If You Lived Here Still,” seems to emphasize that the social problems are still with us. Is it as artists or as citizens that you’re taking up the issue?

ROSLER: Homelessness and hunger are at record levels in the United States right now. Art can serve as a condenser of complex matters into symbolic narratives, and a catalytic node for discussion and organizing. It allows for the further germination of ideas though themes that remained unmined or require a more contemporary view.

I was surprised to discover, given the leery response of the US art press at the time, that there remains a great deal of lasting enthusiasm for this project, in both curatorial, artist-activist, and architectural circles (generated largely by the book, I suspect). Bringing forward the archives reminds people that beginning a conversation through art provides symbolic closure but does not obviate the necessity to keep on informing, organizing, audience building, and agitating. (LEFT: © MILA ZACHARIAS AND E-FLUX)

“If You Lived Here Still…” is on view at e-flux through October 31. e-flux is located at 41 Essex Street, New York.