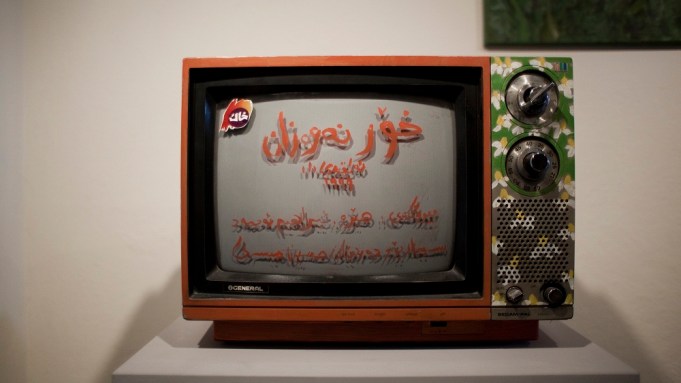 Housed in a charming 16th-century canal house crammed full of furniture and of books on Iraqi culture, the Iraq Pavilion is one of this year’s more talked-about off-site exhibitions in Venice, both for its salon atmosphere and for the presentation of a number of artists of different generations working in a range of mediums. This is only the second time that the long-suffering country has had a pavilion in the Biennale, and the first time that the exhibition consists wholly of artists based in Iraq. Given the recent history of the country, few of the dozen artists included have had the chance to show their work abroad, so the Iraqi Pavilion provides a rare opportunity in Venice to discover previously unseen artistic positions.

British curator Jonathan Watkins, director of the Ikon gallery in Birmingham, spoke recently with A.i.A. via e-mail about the state of the Iraqi arts community, the importance of place in Iraqi art, and his goals in curating the exhibition, which is on view through Nov. 24.

TRAVIS JEPPESEN I guess it’s natural that many would be fascinated by the back story of your curation of this year’s Iraq Pavilion. What was your starting point for such a project?

JONATHAN WATKINS In November last year I was asked by the Ruya Foundation, commissioner for the Iraqi Pavilion, if I’d like to curate the show and immediately said yes. The challenge of representing Iraq through art was irresistible. I was aware that the previous pavilion, in 2011, had featured only artists living outside Iraq and I felt strongly from the first that I wanted to show Iraqi artists resident in Iraq.

A week or so later I was there, having meetings with artists, giving talks, starting to get acquainted with the lay of the land, to work out what would be appropriate as an Iraqi exhibition in the Biennale. The art world in Iraq is very isolated, decimated, and couldn’t be a further cry from the opulence of Venice. So I thought long and hard about how to get the right tone, especially not to slip into clichés and provide Euro-American audiences with what they might expect—checkpoint art, images of car bomb aftermath, etc.

JEPPESEN To what extent has an art-historical accounting process begun in the Iraqi art scene? Is such a process even possible at this time?

WATKINS Certainly a tendency towards historicization occurs in the work of those Iraqi artists living outside of Iraq. They have the benefit of more time, and peace and quiet, to reflect on their Iraqi experience, undistracted by so much everyday difficulty. But then also their observations are very much informed by TV news and current affairs programs that are broadcast where they are now, combined with memories of the way things used to be.

Some Iraqi artists in Iraq right now are historicizing with respect to Sumerian culture, but that probably has more to do with escapism.

JEPPESEN For me, one of the more provocative dynamics is the “stand-off” between two painters: the Twombly-esque Expressionism of Kadhim Nwir and the bucolic, almost Social Realist canvases of Bassim Al-Shaker. Does this represent two aesthetic poles of painting within the current Iraqi scene, or are the artists meant to be seen as singularities?

WATKINS I selected these two because, stylistically, they are polar opposites. But not for a moment would I want to suggest that one is more worthy of attention than the other. Kadhim Nwir fits more easily into a conventional Biennale scheme of things, and for sure he is one of the most interesting painters in Iraq, but then Bassim al-Shakir is not only steeped in an academic tradition, he is also very knowing. He paints a traditional subject—the marshlands—in a traditional way and the artistic result is very affecting. It is very important to understand where he is coming from, culturally, and give him the benefit of the doubt. He is inspired by an essentially rural everyday experience, and true to it, as much as Kadhim Nwir conveys urban reality.

JEPPESEN One of the more moving works in the show is WAMI’s untitled installation, which consists of a room in which all furnishings have been fashioned out of cardboard, suggesting, as Abdul Raheem Yassir’s political cartoons do in a more overt way, the precariousness of life in a war-battered, bombed-out country. Can you tell us a bit more about this artistic partnership, how the two artists met and began working together?

WATKINS Yaseen Wami and Hashim Taaeh, the WAMI artists, could not have been unaware of each other in the small art scene in Basra, and decided to embark together on an adventure in cardboard. It is a rare artistic partnership in Iraq, and otherwise they pursue artistic interests independently. Hashim speaks very passionately about the lack of conventional art materials in Iraq, especially during the time of the sanctions, and how he came to the conclusion that cardboard equally could be useful. More so, if you assume that the medium is the message.

JEPPESEN I know much is changing in Iraq at the moment, and your pavilion is indicative in many ways of how far the country has come in recent years—at the last Iraqi Pavilion, artists living outside of Iraq represented the country. I’m curious as to whether you see the fate of the Iraqi artist as inevitably tied to exile for the foreseeable future, or if current conditions in the country imply the emergence of a new stability from whence a stable arts infrastructure might develop.

WATKINS Things in Iraq are better than they were five years ago, certainly, but this doesn’t mean they resemble anything like the freedom we take for granted in the West. There isn’t going to be a sudden transformation in the Iraqi art world any moment now, but ongoing small steps, sometimes backwards, on the way to a situation that might be described as adequate—and hopefully this Biennale pavilion is one in the right direction. There could have been an exhibition in Venice two years ago of Iraqi artists resident in Iraq. It is more a question of curatorial proposition, assuming that the right kind of security is in place, rather than the way things are on the ground. And Iraqi artists, on the whole, cannot choose to be in exile. They have family and other commitments, as well as the magnetic attraction of home that almost all Iraqis feel, whether in the diaspora or not. They believe ultimately that they should be in Iraq, a new Iraq aspiring to the condition of the Garden of Eden that it once was.

Screw Dressing for Your Gender! Check Out These Gender-Bending Unisex Options You Should Incorporate Into Your Wardrobe