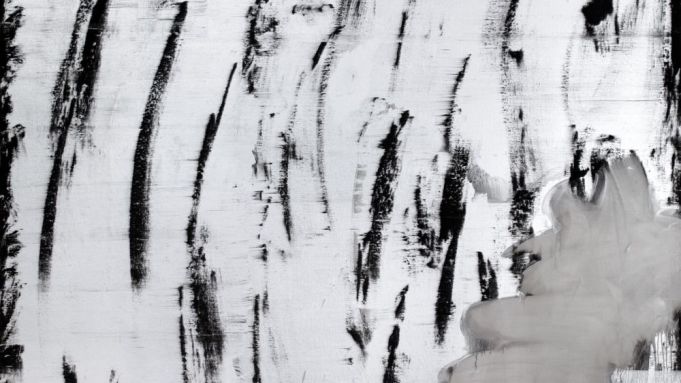 Over the course of a more than two decade-long career, Jacqueline Humphries has approached every canvas with the intent to mess it up. She sees its blank white form as the perfect last painting, and she’s nowhere near her last. Lately, the artist has been covering and uncovering her canvases with lurid veils of paint in signature metallic, washing them out, scraping at them, smudging them, and then re-painting all over them again. The traces of these gestures resurrect various historicized tropes of abstraction-fields of expressionist marks are frequently layered upon chilly monochromes, representing the painting’s version of personality shopping in its search to find itself.

In the ten new works on view at New York’s Greene Naftali [through April 28], the artist’s cannibalization of painting’s recent history is evident in layered compositions of dense atmosphere rendered primarily in silver and black. Humphries has taken to working especially in the corners and along the edges of the canvas, a departure from the central abstract figures pictured in her 2009 exhibition at the gallery. In one untitled painting (all works, 2012), a sea of black calligraphic strokes and vertical sponge smears are corralled by a blue swathe that encircles the image. In another, a mosaic of striped rectilinear planes crowd in to create a border within the painting. It is on the periphery that the artist interrupts the allover painting’s continuum, directing viewers toward the irregular, sputtering movement of sight and the body.

A.i.A. visited Humphries in her studio recently to discuss her latest show.

PAUL SOTO Where do you start when you begin a painting?

JACQUELINE HUMPHRIES I’m continuing to work with the metallic paint that I’ve been involved with for some years now, where the light isn’t in the painting, but remains outside it. I start a painting by finishing it, then may proceed to unfinish it, make holes in it or undo it in various ways, as a kind of escape from that finitude, or wiping down the canvas, getting at what is behind the painting, what is the real of the canvas and support. That’s usually a way of building my conflict about painting into the very act. And I ask myself questions: does painting even have an interior? Is it all exterior? Can you enter it, or are you just up against a wall?

SOTO The allover painting seems to be up against the corners and the borders you paint, which are like framing devices. Those devices seem to conceal and contain a painting, to wall it all in. Are the painting’s nature and those devices in conflict?

HUMPHRIES I think so. The frame is a way of saying, “this, here, now” then I break into that, and introduce varying passages of speed or slowness. Often I find myself entering in through the corners as a way to violate the field. Huge portions of the paintings get removed and washed out over a number of sessions. Colors get lost and covered over and other portions are torn out. The whole ground, in the end, becomes this puzzled together yet semi-unified field of patches, with parts removed and absences, that bears traces of certain acts that had occurred, which are like clues.

SOTO The idea of the clue captures the sense of mystery contained in their compositional brokenness. The press release mentions film noir as a specific influence on this body of work. How do the paintings reflect noir imagery?

HUMPHRIES I want to be clear that I’m not making the work “about” film noir per se, it’s more discovering parity with something that is out there in the culture as a way of talking about the work. After I finished this work I found an essay by Paul Schrader’s called “Notes on Film Noir”—I believe it’s from 2008. In one passage about the stylistics of film noir, he talks about how the character, or figure, in noir films, is unlike the figure in Western or gangster films, where you have a vertical figure against a horizontal background that he stands out from. In film noir, the figure is completely collapsed into the picture. His face is often in shadow when he is speaking, and he is completely embedded in the atmosphere and light of the frame. Schrader says something else that is interesting, he says, “No figure can speak authoritatively from within a space that is continually being cut into ribbons of light.” I feel this statement captures something that I am after in the paintings, of complete embeddedness, with a sense of the painting itself as figure, conterminously layered on top of and under the ground. The ground is the figure, background is identical to figure.

SOTO How does your palette play into your approach to ground? Your use of color is restrained, and the metallic has a gradient effect in the light and is constantly shifting.

HUMPHRIES The black and silver themselves make for a very noir atmosphere. There’s a kind of half-light quality to the metallic paint, and it changes, brightens and darkens with the light and as you move around it, it’s very unstable. Color in these paintings has a very disruptive effect, almost seems to register on a separate plane than the black and silver, worrying the effect of unity. it’s almost an unwanted element, a specter of another painting, formerly banished, insisting through a wall of metallic and black. I consciously avoid colors conspiring together to create any naturalistic feelings. I’m also a big fan of Michael Mann’s films. Supposedly he goes around on the location set and actually paints things. He’s violating the naturalism of the film image by painting it.

SOTO He’s messing it up.

SOTO So the traditional hierarchy of seeing a painting, between figure and ground—and we’re thinking about it metaphorically here, since we’re talking about abstraction—is rejected, or violated, in favor of atmosphere, through the lens of noir?

HUMPHRIES It’s rejected in favor of seeing just the world, where figure is everywhere, dissolved into field. I’m even uncomfortable talking about it in these terms, because it’s immaterial, there is no figure obviously. But in any case film noir is a promotion of this certain way of seeing. It’s significant that film noir developed at the same time as Abstract Expressionism. Knowing that, you can see the very noir qualities latent in Pollock for instance. It runs completely opposite to the rhetoric around Ab-Ex, the thematics of the heroic or the sublime. One can begin to sense real loss and a sense of disillusion in those works, things which are very blantantly expressed in film noir.

SOTO There are portions near the corners of your paintings that look like they are on fire, resembling film that has been “caught in the gate” and has burned around an edge. You are employing the formal logic of film noir, based on multiple perspectives and compositional structures. Are you also referencing experimental abstract film here, like those of Stan Brakhage? That seems to be present.

HUMPHRIES Yeah, I think films of all sorts have been a most important influence on my work. Growing up in the ’60s, I saw experimental film all around, and it was imprinted on me. Seeing a piece of film burning in a gate is a powerful statement about the ephemeral nature of visual culture, the fiction of it. It breaks the reality effect. The real and the reality become opposed.

SOTO That celluloid can burn away and, in the process, burn away entire worlds.

HUMPHRIES Yes, it’s not material, but it is material. It’s somewhere between materiality and mentality, a weird dimensionless plane floating between the mind and the world. The silver screen, which in itself is a very evocative thing. I think film embodies this order of nothingness yet totality. It’s a nearly dimensionless piece of celluloid, yet it is capable of projecting a world.