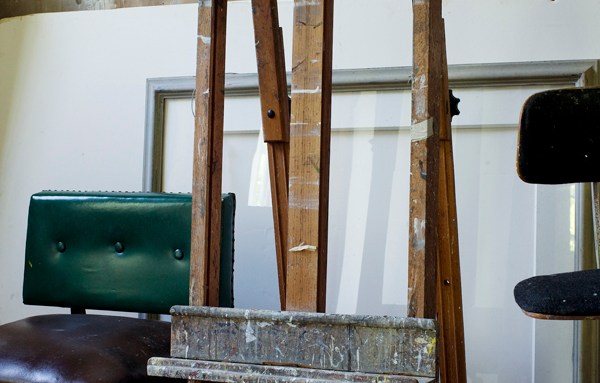 James Welling is well-known for creating photographic abstractions that blend arcane techniques with extreme innovation. Now the artist is pushing the boundaries of his photographic compositions toward the idea of painting, with the help of the late American painter Andrew Wyeth. His latest body of photographs, “Overflow,” at David Zwirner through Oct. 27, includes documentation, image-manipulation and digital abstraction. The photographs show straightforward images of Wyeth’s studio, figurative renderings meant to conjure the feeling of an environment, and water-and-graphite abstractions that evoke painting at its most primeval.

Welling, who began his artistic life as a watercolorist before switching to photography in art school, grew up admiring the work of Wyeth. But only in the past five years has he thought to use the painter—or more precisely, the painter’s world—as a subject for his own photographs. “I saw a big show of his in 2007, and it was amazing to me that someone I had idolized 20 years ago was still making work,” Welling told A.i.A. after the exhibition’s opening. “So I began to look at his work again. Around the time of his death in 2009, I started thinking about doing something, and that led to this project.”

Welling visited Wyeth’s studio in Chadds Ford, Pennsylvania (where the older artist was born in 1917 and died in 2009), and began making the images that comprise this body of work. “I never thought I would be able to photograph his studio, and I was lucky enough to be able to go in before it was fixed up,” says Welling. “It wasn’t exactly how he left it, because his family had removed some things, but it wasn’t fixed up for tours yet. So I saw it in a vulnerable state.”

Of the many images he made there, one of the most striking and charming is Lestat (2011), which evidences Wyeth’s predilection for vampire literature. In the image, Welling gives Wyeth’s paperback copy of The Vampire Lestat—well-known for it’s gothic red-and-black cover—a classy makeover: the artist photoshopped the cover to an ecru tone to better match the subdued surroundings. “To me, it’s not a big deal that I changed the color of the book. I just didn’t like the red, so I changed it,” says Welling. Speaking of his show this past spring at Regen Projects, “MaisonVert,” Welling said,”I photographed a modernist house in Paris, and I changed around colors a lot. So I already had it as one of my protocols: I change colors.”

Accompanying this work are many architectural images that play with the light and shadow in the studio, as well as a piece titled River Cove (2010), an “idea of Maine” the artist created when an injury prevented him from traveling to that state. A composite of several images, the green-and-blue toned work evokes a river setting through painterly layering-without actual paint, of course. “Wyeth, like most figurative painters, changed a lot of things when he painted them,” says Welling. “In some paintings, in a lot of them actually, he wasn’t painting strictly from life. But I don’t see what I’m doing with manipulating and combining images as being like painting; it’s still photography. Photographers have always combined images—now it’s just easier.”

Welling made a series of abstract photographs, Fluid Dynamics (2009–2012), shown in the front of the gallery. In these works, he exposed photographic paper doused in water and charcoal to light from a color enlarger. The resulting motifs are fractal-like abstractions. “I wanted to get at the uncontrollability of watercolor, and I wanted to do something with fluidity,” says Welling. “Those pictures developed independently of the Wyeth pictures, and then I thought it would be a nice thing to bring both projects together. I sampled some of the colors from the Wyeth pictures and put them together.”

Welling is not the first well-known contemporary photographer to re-image the work of Wyeth: in 2002, Collier Schorr made a series of photographs wherein a male model replicated poses from Wyeth’s “Helga” paintings. Of the conceptual coincidence, says Welling, “I told Collier that she was the only person who would be excited about someone working with Wyeth!” Perhaps not the only one.