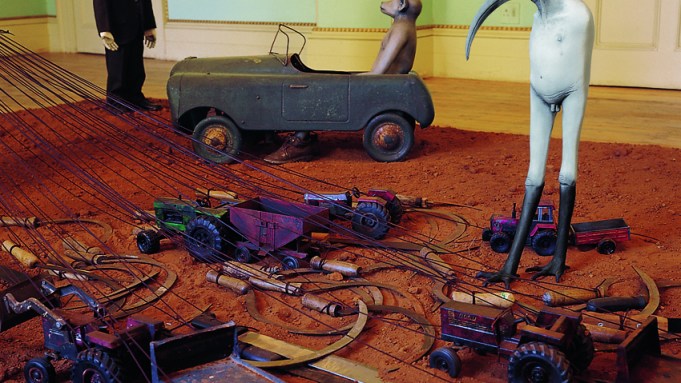 The sculptures, installations and photographs included in Jane Alexander’s current show at the Contemporary Arts Museum, Houston, “Surveys (from the Cape of Good Hope),” inhabit their own world [through Nov. 3]. Encompassing furnishings, ominously spiked tools, wires, fences and vast landscapes, the theatrical staging often leads visitors to her shows feeling they have been transported to a magical place. At the far right of her photograph Corporal (2008) stands a bare chested, broad shouldered figure with its head turned toward the horizon. While he appears to be male, his long snout and large, rounded ears suggest otherwise. We are looking at a modern world of telephone polls and electrical towers, but also a place regulated by otherworldly expectations.

Raised in South Africa during Apartheid, Alexander consistently meditates on the abuse of power. Since the 1980s she has been one of the most celebrated artists in her country, discovering her voice as the nation struggled to find its own.

In one of her most elaborate installations in the show, African Adventure (1999–2002), Alexander’s sculptural figures are urban detritus atop the seemingly red clay earth of the continent. While the anthropomorphized animals seem to struggle to find their way through the landscape, others have adopted traditional male Western dress and stand on wooden boxes to increase their stature. Removed from the dirt floor, each figure faces a different direction, appearing to survey the area they now must control.

LISA DENT You began working with sculpture in the mid-1980s, almost a decade before the end of apartheid and the election of Nelson Mandela as President of South Africa in 1994. Apartheid inspired your artistic ideas, but what sustains them now?

JANE ALEXANDER My work has always been a response to the social environment I find myself in. Apartheid happened to be the important political condition at a certain time, and it still impacts my perception of social environments now, here or abroad.

DENT Who were the sculptors or artists that you looked at early in your career?

ALEXANDER Before access to the Internet, with little national interest in supporting the visual arts, and virtually the exclusive privilege of a ruling minority, art that was accessible in South Africa was rather limited. In some ways it still is. My exposure to art when I was very young was mainly from reproductions of historical European art and international photography in books or journals in my home. At university I was interested in South African art that was a response to the political situation. Paul Stopforth was one of these artists, and through his lectures we were introduced to his work and activism around torture and detention as well as art in America—socially conscious art and artists such as Kienholz, Segal and Hanson. I was not only attracted to the work conceptually but particularly the format of the life-size tableau, assemblage, mixed mediums and aspects of realism—I don’t think I had seen anything like that in S.A. (other than museum dioramas), and it was only after my degree that I saw any of the actual work.

Apart from reproductions of the works of artists such as Caravaggio, Goya, Velazquez, Courbet, George Grosz and John Heartfield, among others, photography in many forms (including documentary, press, propaganda, etc.) was and still is of interest to me. I also knew David Goldblatt from a young age. His books On the Mines, Some Afrikaners Photographed and Boksburg were significant references for me. I looked at Drum magazine, the Department of Information propaganda journal Panorama, even Paris Match, Stern, and Der Spiegel—none of which I could read. Television, newspapers (including The World, Weekly Mail and Vrye Weekblad), posters and pamphlets that were a form of resistance or propaganda also inspired me.

DENT The addition of the photographs as backdrops in your installations takes me straight to the feeling I get when walking into a natural history museum, but in an eerie way, like the Hiroshi Sugimoto series of photographs from New York’s Museum of Natural History. Had you seen those pictures? What were you trying to achieve by adding the photographs?

ALEXANDER I had not seen those images. We have life casts of people in our natural history museum among the stuffed animals. Some of the dioramas have been shut away now but not all the displays. We still have “ethnic types” in vitrines. Reference to those and to dioramas have been included in my work, directly in early photomontage, as well as indirect reference later to the displays of the Royal African Museum in Tervuren, Brussels and other African and ‘natural’ collections.

DENT When shown at SCAD, Security (2009) fit neatly into an old train depot and appeared to comment on border patrol as opposed to the way it was seen at the Johannesburg Art Fair in 2009, where it was placed in a more traditional gallery setting. You seem to be open to reimagining each work in different venues, but what sort of experiences do you hope to maintain?

ALEXANDER From 2002, when I had my first opportunity to arrange a work site specifically [African Adventure in the British Officers’ Mess of the Castle of Good Hope in Cape Town], until 2010, I stopped creating fixed tableaux or individual sculptures, so the figures I’ve produced since then have been interchangeable. Sometimes they are produced for a specific site [e.g., Courtroom 21, City Hall, Singapore], or I add a figure or figures made specifically for a site. My preference has been to integrate work into a site rather than show work in awhite cube, hence the photomontage images which preceded these opportunities and which have always been produced concurrently with the sculpture, enabling me to elaborate on the sculpture through context and particular detail.

DENT You have been invited to participate in many international biennials: Venice, Havana, Gothenburg, Tirana, Bamako, São Paulo, Singapore and Dakar. I imagine these opportunities, which provide you with a larger international audience, inspire you to consider your ideas within a global context. Are there examples in your work where you can see this specifically?

ALEXANDER I have always considered a global context to an extent in my work even if drawing on my location, or specifically referencing it, or the continent. Much of what I consider while producing my work is globally pervasive, such as segregation, economic polarities, trade, migration, discrimination, conflict, faith, etc. It has been very valuable when I have been able to observe how these aspects of social life play out elsewhere, beyond theoretical and visual research.

Whenever possible, I have taken the particular location into account in conceiving the work, such as for Singapore [Verity, Faith and Justice, 2006] and São Paulo [Security/Segurança, 2006]. Security with traffic (influx control), 2007, for an exhibition in Barcelona, made specific reference to the migration of Africans to Europe over the border fence of Morocco and the Spanish port of Melilla. There are many analogies to aspects of social life in South Africa considered in the aforementioned works and the locations they were produced for.

DENT There is a narrative aspect to your practice, and the figures in your installations are often referred to as “characters.” I’ve heard your work described as a desire to exemplify the contemporary individual’s alienation, our lack of interpersonal connection. Would you say that’s true?

ALEXANDER I think the figures become characters because they recur, some in different guises, a kind of troupe. It’s not my conscious intention to “exemplify the contemporary individual’s alienation, our lack of interpersonal connection.” I don’t see the figures as fixed to such a particular interpretation—I see them as integral components of a larger presentation, whether in a specific site or as suggested by a fence, base material or accoutrements, where those aspects may seem apparent, as they often do in society. I would hope they could operate in other, even paradoxical ways as well.