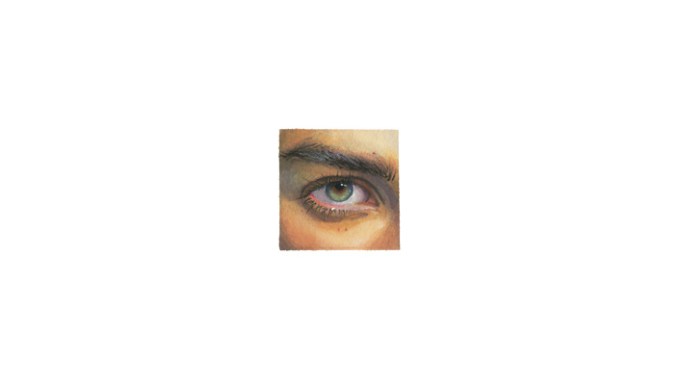 After recording a folk- and jazz-inspired album, Battle Songs, with his band Rowboat, (produced by buddies Dike Blair and Richard Prince), Rian designed a specially formatted box. He then asked 10 artists pals, many of whom he met by writing about their work—Vito Acconci, and of course Blair and Prince—to produce a new editioned artwork inspired by the spirit of exchange.

All three elements are currently on view, hung on walls like posters in a record store. The case and records are on display in a table in the center of the space. Acconci’s City of Words (2010) is a photomontage of a fantasy city, while Richard Prince’s silkscreen, Behind, is a cartoon footprint of the “Barefoot Bandit,” the child thief whose shenanigans made excited headlines last year.

Rian describes his own tunes as “road music for driving, mixing country picking with jazz harmonies and telling stories of hope and disappointment.” The mix of media, genre, thematic reflect the multi-referential sounds match the artist’s mixed media practice. Rian was born and raised in New York but has been multitasking in Montmartre, Paris, for over 15 years, notably as editor-at-large for Purple, to which he’s contributed since the beginning in 1992.

ALICE PFEIFFER: At face value, the artists here would seem to have very little in common. How did you choose them?

JEFF RIAN: I asked artists that I knew and had also written about to contribute to the box. Dike Blair, my closest friend, introduced me to Richard [Prince] in the 1980s. In 1985-86, I worked as a co-coordinator of an exhibition at the Vienna Secession called Wien Fluss 1986, which is where I met Jean-Luc Vilmouth and Vito Acconci. I got Richard into that show. I became friends with all of them. And while there, I did an interview with Richard that appeared (on the cover) of the March 1987 issue of Art in America. It was Richard’s first cover and my first piece as an art critic.

The other artists are people I’ve become close to since living in Paris. I wrote a Phaidon 55 book on Lewis Baltz; I’ve reviewed the work of Alain Séchas…; I wrote a monograph on Stéphane Dafflon; I’ve written essays for Marcelline Delbecq and Véronique Joumard; and Swedish photographer Anders Edström was Purple‘s primary photographer for years.

Their styles are very different, but they’re all what I would call soulful artists, artists who look for meaning in forms.

PFEIFFER: What is the treatment of music by fine art, do you think?

RIAN: We all live with music. But most people in the music world don’t know anything about art, and a lot less about contemporary art. Artists, however, know music. They liked my CD, which is enough for me. I think Vito now listens more to instrumental music than he used to, but he was very happy to participate. They’re people I know. But in the art world, many people probably know a group of people like that, whose works are different but who traffic the same world.

PFEIFFER: Music was the starting point of this project. Does it still play an important role in your life?

RIAN: When I was a very young teenager I was obsessed with folk music. In my late teens I played rock music for a couple years in clubs—six nights a week, 9–2 in the morning. At around 21 I auditioned for a band that turned into a jazz band. The jazz influence stayed, and what I like now is a mix of folk music and jazz.

I feel now the same way I did in my early twenties: in order to play, you have to know some jazz. I had a hard time with the musician’s life and with musicians’ obsessions with their ax; learning George Russell’s Lydian chromatic concept of tonal organization; and the reality of life without daylight. The art world brought light back into my life and it’s still the world I prefer, but I’m now more than just compelled to play music. It’s become a necessity again.