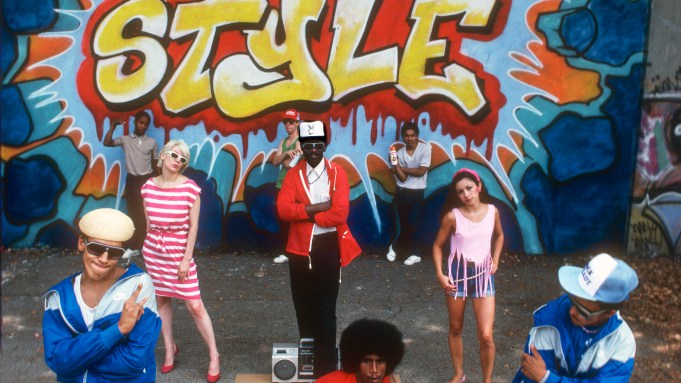 Jeffrey Deitch’s involvement with graffiti and street art has spanned 30 years-from a review of the “Times Square Show” that appeared in the pages of Art in America in 1980 to the 2010 closing of his gallery, Deitch Projects, with an exhibition of work by Shepard Fairey. So it’s entirely fitting that the first group exhibition he has organized as director of the Museum of Contemporary Art, Los Angeles, is “Art in the Streets,” a raucous, illuminating survey of international scope that begins with commissioned pieces on the outside plaza and extends through the space of the Geffen Contemporary. Inside, further commissioned paintings and murals intermingle with re-creations of historically significant installations, paintings, a skateboard park, photographs, films and more. The exhibition was curated in collaboration with Roger Gastman and Aaron Rose, both longtime promoters of graffiti art. Seeking to extend definitions of art, the exhibition sought to expand the museum’s audience while raising questions about artistic training and intention, esthetic criteria and the relation of street art to the museum.

RONI FEINSTEIN: The exhibition seems to comprise two distinct components.  One offers a history of graffiti since the mid-’70s with a focus on youth culture, identifying graffiti as an art form created by inner-city teenagers with close ties to the subcultures surrounding hip hop and punk music, break-dancing, skateboarding, street gangs and tattooing.  The other presents work by artists, many of them art-school trained, who originated within or continue to be involved with graffiti and street art but who have developed a personal style and vision that resonates within the mainstream art world.  The two different strains are merged and undifferentiated in the context of the show.  I am wondering why the exhibition has been structured in this way.

JEFFREY DEITCH: [The structure] reflects my own experience with this work. I became part of the circle of the Wild Style graffiti writers in New York in the late ’70s and early ’80s.  The core group was Lee Quinones, Fab 5 Freddy and CRASH. There were clubs like the Mudd Club, galleries like the Fun Gallery and Fashion Moda, and events like the “Times Square Show.” I’ve known Henry Chalfant and Martha Cooper [among the most important chroniclers of Wild Style in the media of photography and film] since then, and RAMMELLZEE and a number of the others. There was Kenny Scharf, of course, Keith Haring, who I had a long involvement with, and Basquiat.

FEINSTEIN: This was one integrated group?

DEITCH: That’s right. When I opened up the public gallery [in 1996], I was looking for something that was fresh that came out of street culture. In late 1999, I discovered Barry McGee and immediately became enthralled. At Barry’s first exhibition with me, I dropped in a conversation “my old friend Lee Quinones” and Barry said, “Do you think we could get Lee to come to the opening?” So I invited Lee and FUTURA and a few others and we were able to make these wonderful connections between generations. What I began to understand was that these artists coming from different places—Barry from San Francisco, Os Gemeos from Brazil, Shepard Fairey, who came to my gallery when we had our first Barry McGee show—all looked at each other and at the Wild Style people, who were universally revered. So these connections are very real.

FEINSTEIN: Kenny Scharf is prominently featured in the exhibition with early Jetsons paintings, a re-creation of his “Cosmic Closet” installation of 1982, the painted car and a multilevel mural. Scharf has always seemed to me to bridge the gap between popular culture and fine art. Historically, how does his work figure in?

DEITCH:  He’s a very important figure in the show.  Kenny is from L.A. and really represents that L.A. sensibility and generation, growing up on TV.  [In 1978,] he goes to New York and the School of Visual Arts and meets Keith, Fab 5 Freddy and Basquiat and merges the L.A. esthetic with the fluidity of the Wild Style.  He makes a combination that’s uniquely Kenny and he’s continued to build on it.  He’s had a fantastic breakthrough recently with these big public murals.

FEINSTEIN: I was fascinated to learn about L.A.-based “cholo” [Chicano or Mexican-American] graffiti that uses the Old English typeface from the L.A. Times. You mentioned earlier that one of your personal discoveries in doing the show was Chaz Bojorquez, who emerged from this milieu.

DEITCH:  I had never heard of Chaz until I got here. Chaz jokingly refers to himself as “the world’s oldest working graffiti artist,” although he’s only in his early ’60s. One of my favorite images in the show is this [Gusmano Cesaretti] photograph of him running through his neighborhood in Highland Park [with a graffiti-covered wall behind him] when he’s about 14. [Much later,] he takes a conceptual leap and understands he can use this vocabulary to make something so it’s not gang graffiti-he can take it to the level of art.

FEINSTEIN: Some of the works are formally stunning and well-conceived—for instance, those by Margaret Kilgallen, ROA, Os Gemeos, SWOON, Banksy and JR. Others are crude in execution and conception and don’t rise “to the level of art.”  Showed side-by-side, what tension arises?

DEITCH: What I’m emphasizing here is the people who may have started in this culture but quickly developed it into a broader artistic vision. There are 100-plus artists who worked in or have continued to work in Wild Style. We picked the real innovators that have sustained that innovation-particularly Lee [Quinones], CRASH, Lady Pink, FUTURA and Fab 5 Freddy who have taken it out into a wider culture-and invited them to do special sections or paintings.  Other artists are featured and acknowledged but not given the same prominence.

FEINSTEIN: While I applaud MOCA for presenting a history of graffiti and providing a context for art that arose from the streets, I wonder if some of the work in the show has more of sociological or anthropological interest than artistic.

DEITCH: No, not at all. Wild Style is arguably the most influential art style since the great innovations of the ’60s—since Pop, Minimalism and conceptualism. It is this international vocabulary invented in the mid-to-late ’70s in New York City. The artists kept on working and the influence kept spreading. Wherever you go—if you take a train in Spain—you see Wild Style graffiti on the sidings. You see it on highway overpasses in Italy; you see it on the sides of buildings in Moscow. It’s amazing.

FEINSTEIN: Yet for over 30 years, most of the artists you mentioned have worked outside the gallery system, going into streetwear and graphic design, working with musicians and so on.

DEITCH:  In the early ’80s, Lee was represented by Barbara Gladstone Gallery, although he hasn’t had a high profile New York gallery since then. The New York art world caught on to the new trends but the core audience never went away and in fact increased. When I began reviving this in my New York gallery, the audience was phenomenal. You see how big attendance is here at the museum.

FEINSTEIN: How would you characterize the relationship between some of the more newly emerged street artists and the art world?

DEITCH: The next direction, as seen in people like Shepard Fairey, doesn’t need the whole system of galleries, critics, magazines and museums in the conventional way because they have understood how to get their work out there directly to the public.  Banksy more than anybody studied the techniques of Malcolm McLaren and the background of Situationism. He understands how to create a media spectacle and then even created an Oscar-nominated film. He doesn’t need to take his slides around to galleries, go around to openings and cultivate art critics.  He figured out a way to go way beyond that.