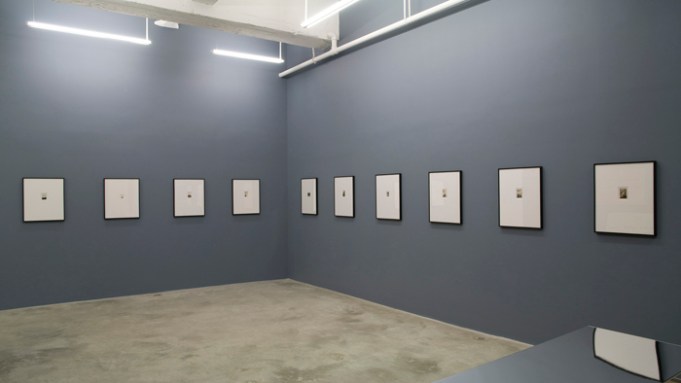 For his 1999 solo exhibition at the Museum Ludwig Köln—situated, appropriately, inside the pop collection—Johannes Wohnseifer put 16 monochromatic panels on the floor, each with a pedestals and an  Adidas sneaker prototype. Conflating corporate branding strategies with artistic output, Wohnseifer seemed to fit tidily among a group of artists critiquing consumerism and spectacular image production—Pierre Huyghe and Josephine Meckseper, among others. In the years following, the Cologne-based artist has consistently emphasized the latent impact of minimalism on commercial imagery, even at the expense of Pop.

“Another Year,” his fourth solo exhibition at Casey Kaplan, infuses these serial minimal forms with new approaches to universal but personal themes like portraiture, and memento mori. Hair 1–III (2010) is a cluster of slate-gray monochromes, engraved with loose tendrils-like marks made by his wife’s hair. Large, wall-based aluminum panels recall Helen Frankenthaler’s bloblike white marks and patterned backgrounds; they are the artist’s “pictures of sleep.”

Stacked Studio Lights (2010) recalls Donald Judd’s geometric interpolations into space, but the whole illuminated apparatus brightens, hums, and blinks to correspond with Wohnseifer’s sleep cycle. Elsewhere, Waking up in Paris (2010) comprises a selection of ten framed postcards of the Eiffel Tower, with a less-than-picture perfect provenance. We asked the artist to flesh out the underpinnings of these disparate renderings.

DAVID EVERITT HOWE: You reference—and even commensurate—artists from minimalism and pop, which are sometimes considered opposite sides of the modernist coin. How do they correlate for you?

JOHANNES WOHNSEIFER: Minimalism and Pop I’ve liked since I saw them as a child in Cologne. But think of the Leo Castelli Gallery: that was a dealer who was able to reconcile both groups of artists, through the principle of seriality, which you see in a grid of Jackies on the wall or a Zinc Square on the floor. Both are easy to pair in a group show, and both influence the look of kitchens and flagship stores to this day.

When I made the installation Museum (1999) at the Museum Ludwig Koln, I didn’t like the museum’s floor because it didn’t work with the shoes I designed. So I put chipboard on the floor, which were painted after German graphic designer Otl Aicher’s color scheme from the 1972 Summer Games in Munich. To a lot of people it invoked Carl Andre, but it was less about the reference and more about changing and optimizing the space.

I re-used Otl Aicher’s color concept [because it employed] bright pastel colors, and totally lacked the national red and black. Security guards and policemen wore bright blue uniforms. Aicher executed a counterpart to the 1936 Olympics in Berlin—”happy games,” at least for a moment.

HOWE: Otl Aicher’s color scheme brings up an interesting point, specific to how you politicize modernist design principles—International Style architecture, or typographic or furniture designs. What do you find particularly resonant today about the utopian agenda of so much modernist design and architecture?

WOHNSEIFER: The resonance has faded, because what started as a very human, democratic impulse became a pseudo-elitist mode of distinction: furniture design. I’m more interested in political surfaces—how politics are represented, how and why certain things look the way they do.

But I’m not a political artist. My mother helps refugees as a volunteer, which is much more politically effective than all the work I did as an artist.

HOWE: The images from Waking up in Paris initially appear as nostalgic found postcards from the Eiffel Tower. That they were taken by German occupiers during World War II charges them with implicit violence, but also seem to suggest the power of monuments to transcend cultural and political conflicts. How do you navigate the banal comfort of monuments against the type of monumentality historically deployed in the service of nation-building?

WOHNSEIFER: That series was sourced over a period of three years. The working title was Evil Eyes, and I tried to examine the vision of the occupant. I had them framed and presented in a mode typical to vintage photography, on a wall painted in a light grey.

I remember my grandfather telling me that when Cologne was bombed during WWII, the first thing they did afterward was to see if the cathedral was still standing. Probably the Eiffel tower had a similar meaning for Parisians.

HOWE: When I first saw Stacked Studio Lights and Hair 1–III, Janine Antoni came to mind—particularly her 1994 performance, Slumber, in which she slept in a gallery recording her sleep patterns; and Loving Care, when she used her hair as a mop. Was there a specific connection to Antoni’s method of performance?

WOHNSEIFER: Thank you for the allusion to Antoni. I did know about the works, but didn’t have them in mind. That said, what she did with Slumber, I wanted the audience to imagine when seeing Stacked Studio Lights.

HOWE: In what respect is that work a type of portraiture?

WOHNSEIFER: Well, first, the title indicates that these lights are from my studio—which used to be a small private school for secretaries. But this kind of Siemens lamp was ubiquitous in the 1960 and ’70s, especially in public buildings. I had them stacked in a custom built, powder-coated metal rack. I’ve made work about Siemens before, and published an artist book with Walther König called White Men (2009), which deals with a company that produces everything—from telephones, hairdryers, and dishwashers, to trains and atomic power-plants.

For the show, I wanted to incorporate a hidden or recorded performance—performance infused with passivity. I went to a sleep laboratory at a hospital in Cologne and spent a night there. With the records of my sleep patterns, we programmed the neon lights. The open hours of the gallery correspond more or less to my daily portion of sleep, which is illustrated using different intensities: It shines brightest when I’m sleeping deepest. When the lamp is flickering you are watching an REM-phase.

HOWE: This exhibition seemed unlike earlier bodies of work, formally and conceptually. In fact, it seemed to be unpacking a whole different set of concerns—to grab from the press release: dreams, time, and mortality.

WOHNSEIFER: You’re probably right. If you like, the lamp is a self-portrait, whereas the hair-paintings are portraits of my wife, executed using images of her hair, laser-engraved into carbon surfaces. This is a very personal, organic and indexical mark, which I typically try to avoid.

But the most important element of the show is sleep, which spreads to dreams and nightmares, represented by the photographs from occupied Paris. Sleep and death are closely related. People die while they are sleeping. In the larger abstract paintings I tried to paint sleep—not dreaming, just sleep itself. You have more or less boring, repetitive patterns, interspersed with white patches. Sleeping and breathing, with phases of being awake, or wildly dreaming.