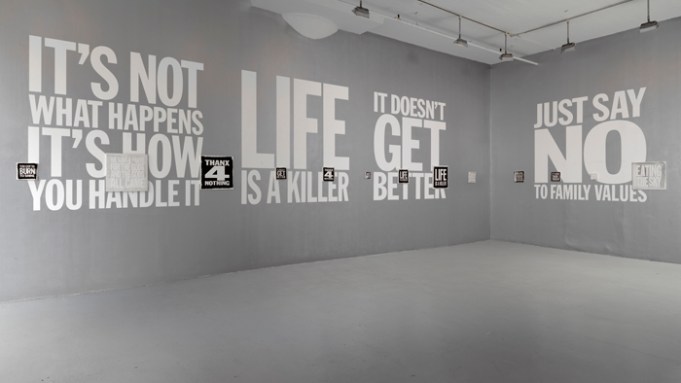 John Giorno’s poetry proposes that anywhere you go, you can have an intense physical engagement with words. Since the 1950s, he’s framed language with controlled, climactic line breaks and repetition, and an own affirmative speaking voice that, once it occupies your reading, warmly dictates your rhythm and interpretation. Giorno’s Dial-a-Poem (1970) at the Museum of Modern Art let people the world over call in and access the intimacy of poetry. In pieces like “Suicide Sutra,” (1973), Giorno proposes bodily and psychological redemption by considering the brain’s place in space: “THE AIR IS LIQUID/THICK/AND HEAVY/PRESSING/IN/ON YOU.“

Since the 1970s, Giorno has exhibited a evolving set of drawings and paintings based on his poetry. “Black Paintings and Drawings,” his current show at Nicole Klagsbrun, his first with the gallery, includes paintings of words, set on a wall painted silver with stenciled poems reading in negative. The series emerged from an earlier schematic, exhibited at Almine Rech in Paris as drawings, explains the artist, “I hadn’t thought of it then, but it’s just like classic art, where you begin with drawings, and move toward painting.”

GARTENFELD It’s interesting that you’re showing with Nicole Klagsbrun for the first time. I know her as a great proponent of artists and poets from your generation on the West Coast. How did you two meet, and what was your experience of those West Coast artists’ experiments with art and poetry?

GIORNO I know all of those people very slightly. I’m from New York, and there is that polarity. I tour all the time, and I get invited less to LA than to Europe, but that’s not my problem, I’m just a poet who does all these other things. With Nicole there’s another side, artists like Adam McEwen who work with words, which is equally important.

GARTENFELD You’ve been doing silkscreen in combination with your poetry almost from the very beginning.

GIORNO I’ve been doing this since the middle-1950s, and the silkscreens since 1967. Every year I did more. The first prints that were shown were at MoMA, in the “Information” show in 1970. The curator, Kynaston [McShine] said, “You have a room… What are you going to put on the walls?”

GARTENFELD Much of the tension of your position, between poetry and art, is your use of concrete imagery. At around the same time, you began doing silkscreens, with both found phrases and your own. How were you turned on to that concrete imagery? Did a body of work like this come from poetry or from art?

GIORNO The genesis came to me early, and it came to me through painting, and painters: Andy [Warhol], and Bob [Robert] Rauschenberg, and Jasper [Johns], seeing the way they work. Being a poet is wonderful, and you can do many things being a poet: one is writing. Poems come as words, and words are poems. Poems have sound, and sound is performed, so the performances started. When you’re performing, it’s visual—through video recording, but also on the page. This was the 1960s, and my early books were also designed with a sense of the visual, by printing different color pages.

GARTENFELD You’ve talked about the way that a poem should be able to be memorized or internalized and, correct me if I’m wrong, but that is something that’s been taken over by advertising. With a set of works like “Just Do It,” there’s a conscientious engagement with that language of advertising, even a literal cribbing of the words. Is there a tension with ads that you’re pulling out?

GIORNO A painting, like a poem, is wisdom. It comes into peoples’ minds in a way. The painting is the vehicle. From 1962 to 1980 I exclusively used found images in my work, and this comes from being friendly with Andy in early 1961 and Jasper and Bob Rauschenberg, and my thought was, “If they can use the found image, why can’t I?” And so I did this first found poem in ’62 and they were published by C Press, the seminal magazine. Bob [Rauschenberg] and I were together in 65, 67, so I started doing collage, and the influence was him. He and Andy, and Jasper in a different way, in terms of what images they chose. That was the great teaching. If two things are identical, why do you always treat them the one way? They were the influence. I studied Duchamp and the Futurists—the Italians and the Russians—but that was not the influence: it was seeing it and feeling it in a real situation. “Just Do It” is actually from another poem of mine. With the concrete word poems, I did every permutation. I did two shows every year, and made performances and videos. And then by 1970, 80, I’d done everything possible that I’d needed to do. So I have enormous influence from commercials.

GARTENFELD When you started drawing, there was a “scribbled” quality, which has since taken on more formal organization, like a grid. You’ve likened them in the past to weaving. Do you consider yourself as having a skilled hand?

GIORNO I’m not sure where I was when I first started, but in the past 10 years I’ve become quite good. Elizabeth Peyton said to me a couple months ago, she said, “You know, John,” she was talking about herself, really, because she’s been doing those paintings since she was three years old. “But the more you do things, the better you get.” You become aware of what you’re doing. Each time I do a show I do more and more, and they change.

GARTENFELD You work consistently with a basic, non-serif typeface, which you developed with a designer, Mark Michaelsen. What’s the proposed effect of that font?

GIORNO I’ve worked with designers all my life. I give him the words and he designs it accordingly. Mark almost invented this style of type; he redesigned Newsweek and started Entertainment Weekly. He discovered this style through the supercomputers of the time. He did it for me and then he did one guest cover for the Village Voice, and that’s it: The style took off. Three weeks later it was in an American Express commercial. But I like the flow, and I’ve gotten attached to it. Certain words pop out and then one just works with them.

GARTENFELD There’s an enduring tension between how designed and polished the words are, and how unfinished they can get in execution.

GIORNO In my mind, the drawings work because of the feel of the paper and pencil. The words don’t have a feel; it’s the canvas or the paper. Somehow I was able to get away from design for a second. The fact that the words aren’t filled in or the canvas has weight, that’s what makes the thing really work.

GARTENFELD In this exhibition you are showing two videos of yourself performing, and you will perform in the space. In combination with the evident workmanship of the painting, there’s an over all effect of your presence in the room. Was that a concerted effort?

GIORNO Well, I do these things over and over, and each poem, each phrase has a musical quality that I know by heart. In both of these performances I’m in another zone. In one, it was a great video and I’ve done a great performance. In the other, it’s a hot summer day on the top of a mountain and I’ve gotten brain-dead. I performed, but it was on the top of a mountain in Italy and no one was there. It’s not a great video, but there are two great performances—with two different audiences.

GARTENFELD Do you remember the first time you performed?

GIORNO Yes. It was actually 1962. I went to poetry readings around Union Hall, where the Palladium Hall was. This was a magazine launch and I’d had something published. There were maybe 15 people and I was just sitting there when the speaker said, “Giorno is next!” “What!?” “John, you’re published in the magazine, go up and read them!” Everything was like Jell-o. It was just two short poems, maybe only took me a minute and a half. I was a wreck, I almost fell down. Then you realize when you become a performer, you use that same energy: it just gets used, rather than being pure fear.

GARTENFELD When you think about breathing in your performances, do you generally feel like you’re in control?

GIORNO No, I don’t think about it as control. Every phrase has a breath. And it’s a little bit irrational because it’s not fixed like music, it’s depending on if I get there. If I don’t get there, I gasp for one. That’s very important because you’re not reading. It’s from another part of your mind, which is like music, but it’s not music.

GARTENFELD How did you become involved with poetry?

GIORNO When I was nine years old, I had an eye operation. You can see this eye here is a little bit different, there’s a scar here. This was in 1945, and I had a tumor between my brain and the optic nerve. So in 1946-47, I had this operation where this great doctor cut away the bone and took the tumor out, which was benign. This was World War II technology, cutting bones. Before, they would have cut the eye out. I couldn’t play sports, and I was always quiet by nature. I have this memory of a friend of my father’s saying, “Perhaps George,” he was talking with my father, “Maybe John should go to art school, because he can’t play sports.” To make a long story short, they found out about Pratt, so when I was 10-and-a-half years old, I went every Saturday to Pratt.

GARTENFELD Do you remember the first poem that you wrote?

GIORNO I’ve been a poet since I was fourteen, which is quite early. We had a class assignment at high school to write a poem. This was the 1950s, maybe even 48 or 49—the Middle Ages, before modern poetry, modern culture.

GARTENFELD You mean that poetry had reached a logical or historical conclusion in some way?

GIORNO Poetry existed in this classical way. Nobody thought it was dead; it just never entered anybody’s consciousness. And so I went home and wrote this poem and had a little blissful experience. I brought my poem in and the teacher read them and about five days later, she said, “I loved all your poems, I’m going to read three of them.” And after that, I gravitated toward the older kids in the school. There was a literary magazine and there were painters, that kind of thing. My life from then on was that of a poet.