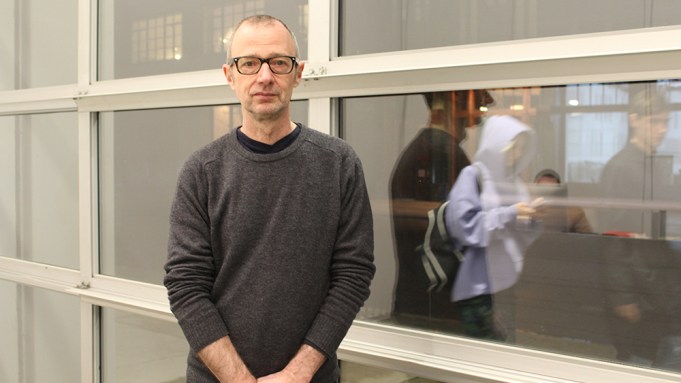 Since his student days at Cal Arts in the 1970s, John Miller has been critiquing Western politics and consumerism. Miller’s exhibition “The Collapse of Neoliberalism,” on view at Metro Pictures, New York, through March 14, features new photographs, installations, and a video in response to the current political mood. The artist stages scenes with mannequins, reflecting the scripts and patterns that mediate everyday life. In his latest video Toll Free (2019), a camera panning a busy New York intersection is visually interrupted by floating images of desk phones and mannequins, while elevator music and messages from automated spam calls play in the background. Shot in mid-afternoon, the video captures an atmosphere of workaday humdrum amid the threat of financial predation by robocalls. Below, the New York– and Berlin-based artist discusses his inspirations and working process.

I wanted to capture a sense of unease in my exhibition “The Collapse of Neoliberalism.” This is a moment of populous unrest, driven by xenophobia and income inequality. The title of the show is meant to be bombastic, but also as a trigger for vague anxieties. Origin [2020] is the first work viewers see when they come in. I made this monochrome blue painting as a pseudo-doorway that appears on both sides of the wall. A mannequin is situated in front of the wall, as if it’s about to enter the gallery through the painting, mimicking the viewer’s own movement. I think of the mannequin as both being and displacing the viewer.

Michael Fried claimed that theatricality was negative, but all the “bad” elements he identified informed the agenda for me and many other artists of my generation. The installation Epic Theater [2020] simulates my work in the studio. The background of the installation is a stock photo of a classical ruin that I turned into a backdrop and set up with a collection of props and equipment that I used to make the other images in the show. There’s a crumpled backdrop a mannequin hand, and a wig on the floor. I bought a cheap small-format camera to complete the whole setup. Overall, I’m a tidy person. But when I worked on this show, I uncharacteristically created heaps of debris. The photos look clean, but the process was messy. I wanted to show how the work was created but I also wanted to harken back to classical culture, as a reminder of the origins of theater and the end of a civilization, with this image of a ruin.

The backgrounds for the works—with the exception of the chart backdrops, ranging from architectural plans to psychological diagrams, which I produced with the help of a digital printing company—are images I found online. In my very first show at Metro Pictures in 1984, I pursued the notion of the normative picture. I was trying to make a photo of what someone would think was ordinary. The backdrops throughout this exhibition are images of what people who work in, say, wedding and corporate photography, think people want.

The photo Marsha [2019] shows a female mannequin in an opulent room with a crowd of other mannequins. It refers to an episode of “The Twilight Zone,” in which a woman named Marsha appears in a department store near closing time and is unable to leave. She ends up being directed to an elevator that takes her to another floor in the store. When she gets off the elevator, mannequins call out to her. It turns out that these mannequins were allowed to leave the store and live as humans for one month per year. Marsha was a mannequin who stayed in the outside world too long and forgot who she was. In the last shot we see her frozen, posing.

My band, Dirty Mirrors, played for the opening and we decided at the last minute to freeze at the end of our performance. We weren’t sure what would happen, but when we froze, it was incredibly awkward. Eventually people realized that we were echoing the installation directly behind them, Project for a Revolution in New York [2020]. It’s a mannequin rock band inspired by a record cover by LA post-punk band the Skoings. We held our poses for seven minutes and the end of our set turned into a photo op. Freezing not only inverted the exhibition’s mannequin-human dynamic, it also made it seem as if our entire performance was simply leading up to that moment.