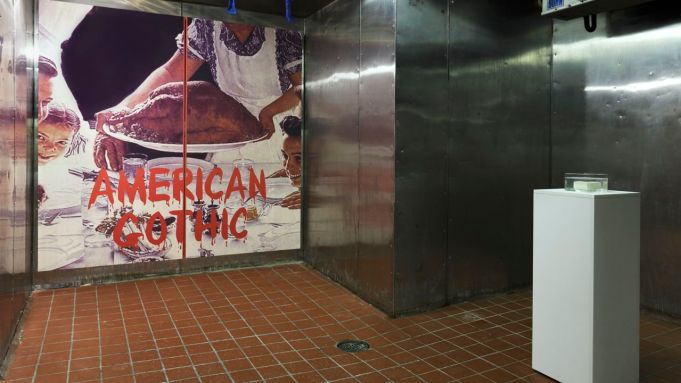 Location, location, location. First presented at Greene Naftali Gallery in 2002, Jonathan Horowitz’s exhibition “GoVegan!” gets a new life christening Gavin Brown Enterprise’s secondary space, La Frieda Meats/GBE, a former meat-packing factory where everything but the carcasses and cleavers remains intact. The perfect foil for the perfect joke? Not really. As it turns out, Horowitz is quite serious about vegetarian issues, and despite the work’s ironic edge would have us all re-consider the old adage, “you are what you eat.”

JANE HARRIS: I imagine a major reason you reprised your 2002 “GoVegan!” exhibition was the unique opportunity to show it in a former meat-packing factory. And one of the most distinct components really is that lingering rancid smell of rotting flesh. What else factored into this version, and your desire to re-present the work?

JONATHAN HOROWITZ: When I first made the work, one thing that interested me was that vegetarianism is perceived to be a light political issue, and as such, it afforded the possibility of the work having a symbolic register and being about things in addition to the literal subject. But I also wanted to question this preconception that vegetarianism is of little consequence. Now, with the environmental devastation that meat eating causes becoming more known and the Avian Flu and really so many other concerns, I think people are starting to see that eating meat isn’t such a light matter after all. So while the location couldn’t be more perfect for the show, the time also seemed really right.

HARRIS: I couldn’t agree more. The general public is becoming more aware of the interrelatedness of issues like meat consumption, health, the environment, and animal welfare, among other issues. I’m so happy to see documentary films like Food Inc., and Fowl Play get a wide audience, and for the truth about factory farming to come out. The art world too seems poised for a return to thoughtful, politically engaged work that isn’t topical or agitprop in focus—at least, I hope so. I’ve noticed my students at SVA are developing a criticality in relation to political issues that I find promising.

HOROWITZ: That would make sense. Artists are always reacting to what precedes them. When I started making work in the late 80s, I was in part responding to the kind of didactic political art that was popular then, and my work was more formal. When things swung in the other direction, my work became focused on subject matter. I might just be a contrarian, but the “Go Vegan!” show was a reaction against both types of art—didactic, moralistic, political art, and a moving-target kind of art about anything and everything and nothing that seems to be popular today.

HARRIS: Â Interesting. I was a real activist in the 80s, partly in response to that kind of work, but I wasn’t coming from an art background, and I quickly saw what a short shelf life it had. So if anything is game, are you saying that you’re skewering the vegan hysteric (the crazy PETA person who wants to blow up restaurants that serve veal), or more generally the trope of the strident politico, while also hoping to encourage people to consider the ethical consequences of meat eating? I’m just trying to understand you, and for me there is a big difference between moralism and ethics.

HOROWITZ: I don’t really want to skewer anyone, least of all vegan activists, but I think vegetarianism is a subject that some people would say is not important enough to make art about. I think a justification for political art is that it’s irresponsible for artists to look the other way in the face of atrocity and injustice, and there are some situations that people across the board would say are intolerable and demand action. The vast majority of people, however, would say that eating meat doesn’t fall into that category, and the vast majority of people who see the show are not going to be comfortably nodding their heads in agreement and patting themselves on their backs. There’s a certain kind of complacency that political art can engender, and I wanted to complicate that.

HARRIS: How do you think you complicate that complacency, exactly?

HOROWITZ: There’s a real mix of lightness and heaviness and humor and horror. There’s not a firm ground to walk out on, and hopefully the viewer will be left thinking twice about a thing or two.

HARRIS: What about the complacency of the “vast majority,” a convenience-oriented consumer society that prioritizes getting what you want how you want it when you want it, regardless of the consequences?

HOROWITZ: I don’t make a distinction between an art audience and a “vast majority,” but I think vegetarianism directly addresses that issue of our culture’s unalienable right to consume, which is really no right at all, but a directive. That’s what we’re supposed to do to end the recession, buy and eat all of this crap.

HARRIS: Do you think the animal industry is an injustice that demands action then?

HOROWITZ: Absolutely. I think it is horrific and unconscionable. Don’t get me wrong: I don’t think that vegetarianism is a light political issue at all.

HARRIS: So has the reaction been any different this time around?

HOROWITZ: Maybe the first time around people didn’t quite know what to make of the show, because my work was less well known.Â I think some people thought it was a joke, and I can remember being asked, “Is all your work about vegetarianism?” which concerned me some.Â But people have been responding positively, and I’m really proud of the show, so I don’t really give a fuck.

HARRIS: It’s a great show! There are aspects of it that do invite an ironic interpretation, though, don’t you think? I’m thinking of the block of tofu encased in a vitrine and placed on a pedestal, which reads like a irreverent nod to minimalism, though I know you told New York Magazine that the exhibition was “a celebration of this nonviolent, pure, wondrous foodstuff.” How serious were you when said this, and am I wrong to detect a note of faux innocence here, a kind of Warholian equivocation, not just in the quote but in the work as a whole?

HOROWITZ: Something can be sincere and ironic at the same time. I think people often come to art with a defensive posture, wanting to know if it’s for real or not. But think of a drag queen impersonating Liza Minnelli. It’s real and fake and mocking and adoring all at the same time.

HARRIS: I totally agree. That’s why I mention Warhol, master contrarian. But would you say that by proxy,the work also walks the line between contradiction and hypocrisy—playing with the idea of false sentiments, and making sense of the incongruous? Stuff beyond subject matter.

HOROWITZ: I think the work operates on an emotional level more than art often does, and emotional response has little to do with consistency. I wanted to let my guard down when I made the work. Why question that piglets are cute and try to rationalize that it’s okay to torture and slaughter and consume them? And while it’s of course no argument that you should be vegetarian because Morrissey’s one, the truth of the matter is that thousands of people are vegetarian because of Morrissey, and that’s great. I don’t know that art on a wall can really present an in-depth analysis of an issue, but it can address an issue and provoke a response.

HARRIS: I guess what I’m getting at here is question of strategy, of talking about a subject that most people want to ignore, and figuring out how to address that willful disinterest. (Even the grids of cutesy animals arranged according to the type of “product”—pork, poultry, etc.—have this wonderfully subversive humor, especially when seen in juxtaposition with the giant Rockwell reproduction of Thanksgiving dinner, which you re-title “American Gothic”).

HOROWITZ: I don’t really have a strategy. Felix Gonzales-Torres spoke about sneaking politics into the museum under the guise of Minimalism, but while I admire his work, I’m not sure that he succeeded at that. It’s more like he just walked into the museum making a kind of minimalist art that was immediately embraced. So I don’t know. I’m a vegetarian, I care a lot about the issues surrounding vegetarianism, and if this show makes someone go vegetarian that makes me happy, but I didn’t have a specific goal in mind when I made the show. I just try to make work about things that interest me and that I care about.

HARRIS: What about the use of celebrity activism, which you’ve engaged in other work (the wall of portraits in the “office” that presents famous vegetarians from Einstein to Leonard Cohen to Brooke Shields, and the vintage footage of Paul McCartney and wife on their farm)?

HOROWITZ: I’m interested in the way celebrities and people in general construct and reclaim their identities through their political allegiances. That’s part of it. And the celebrity vegetarian piece, that relates to a piece I made the previous year called The People (35 Celebrity Endorsers of George W. Bush Downloaded from the Internet), which was a grid of 8 ½-by-11-inch prints of what the title states.Â I was interested with that piece in using celebrities to represent a particular sector of the population, and the celebrity vegetarian piece is similar. Celebrities show us what we look like—that’s why it’s called People magazine. With the Bush endorsers piece, I chose not-so-flattering pictures, but with the celebrity vegetarian piece, I chose the most seductive images I could find. I wanted to try to make something where I had a very direct and purely positive relationship to the images. So that piece is about beauty, among other things.