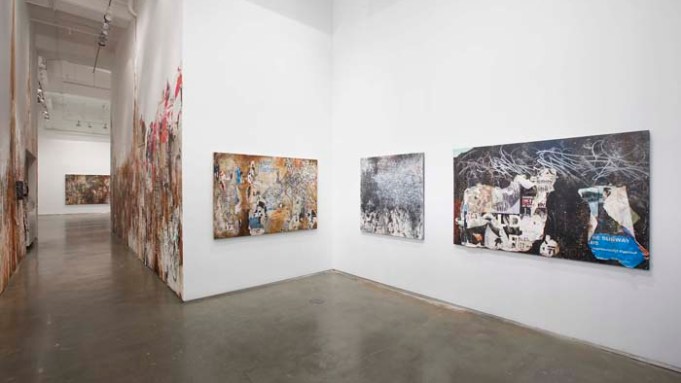 You couldn’t miss the opening of José Parla’s solo show at Bryce Wolkowitz last week if you tried. The Miami-born, Brooklyn-based artist hired two street drummers he met on the subway to beat their paint buckets outside the former graffiti writer’s exhibition, “Walls, Diaries, and Paintings.” It is his first with this gallery.

“I’m interested in bringing the energy of the city inside the gallery,” says Parla, who showed 10 paintings that combine Twombly-esque calligraphic language (rendered in acrylic and ink) with plaster, tags, scribbles, phone numbers, “paranoid schizophrenic sayings” from other writers, and posters he’s torn off the streets over the years, “waiting for the right moment to put it in a piece.”

The result is a series of palimpsests that appear to absorb that urban energy and reflect it back to the viewer-though most of the language is broken and illegible. The artist intends to convey the effect of “reading through feeling” or “reading through seeing.” (The latter was also the title of Parla’s 2009 show at Hong Kong’s Ooi Botos Gallery.) Here, a tagged pay phone attached to one wall plays collected sounds of construction sites, subway trains, foot traffic and music, and bolsters the alchemical effect. “Outside [tags] get erased, destroyed, gone over, washed out. So I was interested in making paintings as time capsules. That said, a lot of [the paintings] tell personal stories.”

Those stories began in Miami, when Parla was a teenage graffitist tagging under the name “Ease.” He wrote on roofs, trains and bridges, in a city flourishing and falling under the reign of the [drug traffickers] Cocaine Cowboys. “It was crazy growing up in Miami in the ’80s,” recalls Parla. “Drugs touched all levels of life in Miami. There were gangs everywhere. Whether you wanted to do art, or dance, or just hang out, you were always in the middle of a major criminal atmosphere.”

While break-dancing one night at the club Hot Wheels—where Schoolly D and Philly’s Tough Crew were performing—the 16-year-old Parla was shot in the leg. And though he doesn’t feel as endangered as he once did, he’s not drawn to bombing as he once was. He recently finished two legal murals in Toronto.  “Don’t get me wrong, if I’m a little bit drunk I’ll take a tag on the street, but that’s not the missions I used to pull,” he says, referring to how he used to organize “missions” of artists to paint massive murals at night. “I don’t get the same rush as I used to.” Before the opening Thursday Parla walked us through the works giving him a new rush and talks about his next venture. HINT: No paint was required.

MICHAEL SLENSKE: Where did this show begin?

JOSE PARLA: Well, this is a story that starts when I was a kid in 1983. I titled the show “Walls, Diaries and Paintings” because it deals with my experience as an artist painting primarily on walls.

SLENSKE: Were you always trying to merge your work in public, and with traditional medium?

PARLA: Since I was little I was pretty much aware that there are no rules; that you can extend yourself beyond stereotypes. When I was coming up as a painter, as a kid in the 1980s, I heard a lot of things like, “How did you make your transition from street to canvas?” and, “How do you make a transition from graffiti to fine art?” It’s a question that troubled me because I never looked at the two things as different.

SLENSKE: Is the writing a narrative, either in its internal logic, or how it charts your own progress?

PARLA: It’s all narrative. It’s all from journals and a stream-of-consciousness writing. In that I’m playing with memory and the psychology of memory. I started to look into Sumerian and Acadian language—the origins of language. Before the Egyptians, before hieroglyphics, they were keeping journals: how many chickens they had; how much straw; how much rice. They would erase it and write again, although you could always see the traces. I started thinking of language and the phenomenon of what happened here in the subway systems, how when someone painted on the train it had its birth. When someone would erase it, it had its death.

SLENSKE: But you were in Miami.

PARLA: I was in Miami, but we were heavily influenced by what was going on in New York, because everyone would come down.  We had buses, freight trains, and rooftops.

SLENSKE: How do certain pieces from the street end up in your paintings?

PARLA: In the last 12 years I’ve traveled all over the world, and everywhere there’s the same dialogue with walls. People need to leave a mark, people write messages that are political, messages about love; people tear shit down and put stuff up. When I go to a new city, I’m always looking to see what gets put up, especially if it doesn’t initially look like traditional New York graffiti.

The painting Dekalb Avenue comes from posters I’ve collected around my neighborhood in Brooklyn over the last 10 years, and it’s an homage. It shows how that neighborhood has changed, so it’s the central piece of the current show, because it’s where I’ve had a base for the last 12 years.

SLENSKE: Are all of them  executed in layers, or are some like A Biographical Dance of Combine Stories a more straight narrative?

PARLA: It’s a different type of palimpsest. [Dekalb Avenue] depicts more walls in the city more closely, while [A Biographical Dance of Combine Stories] is a bit more abstract and psychological because the writing leads

you to think about memory as if you were the artist. The title comes from me growing up dancing.

SLENSKE: Is it a record of performance in the studio?

PARLA: That’s part of it. I imagine in a paintings that look like walls that anyone is allowed to do anything in their own free time, so I imagine myself painting as one of those passersby that might just do anything.

A collector of mine caught her husband staring at a painting in their home and said, “Honey, what are you seeing in José’s painting? You’ve been staring at it for hours.” He said, “I’m trying to read it,and the more I try to read José’s painting the more I see my own story inside this painting.” And that’s exactly what I wanted. You look at a Cy Twombly painting and you just get a fragment of the sentence, just one word, but that one word leads you into your own [story]: the red color, the bright yellows, touchstones in the painting. I think that’s what’s happening in these works, which can only be read by me. It’s like a diary that you lock. It’s private.