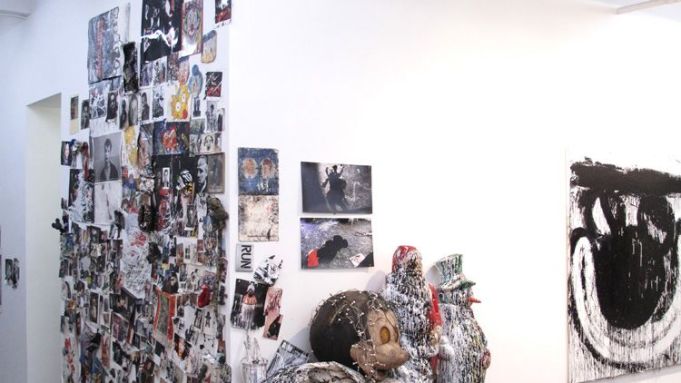 Joyce Pensato’s current show at Friedrich Petzel is titled “Batman Returns,” but it might have been called “The Return of the Repressed.” Along with a generous sampling of recent paintings and drawings of Batman and other cartoon character heads and masks in her signature style of aggressive strokes and drips, Pensato includes detritus from the Brooklyn studio she was forced to vacate last spring after 32 years of occupancy, allowing visitors to see the traces of her private creative process.

Whole walls were removed and sections put on display, along with stapled and paint-covered photographs, piles of broken furniture, soiled stuffed animals and oddball knick-knacks that have been her inspiration over the years. All of these items are covered, more or less, in splattered paint, so that the entire exhibition resembles a giant Joyce Pensato tableau.

In conjunction with the exhibition, Pensato has published an artist’s book, The Eraser, filled with photos, most taken by her, of the studio before its destruction. It shows a place not unlike the notoriously messy studio of Francis Bacon, and it is hard to distinguish between random objects and finished artworks.

Seeing the detritus in the show offers a peek at the creative ferment underlying Pensato’s drawings and paintings, in which the id appears to hold sway. Yet the installation also demonstrates the control the artist ultimately exerts over her process, for the sheer randomness of the objects poses a telling contrast to the formal canniness of the finished works. Striking among the works is a new painting of Batman in which Pensato uses color in that medium for the first time in her three-decade-long career, and a number of rough charcoal drawings, some with radically distressed surfaces.

Pensato took me on a tour of the show the day after it opened. At one point, she switched on a number of paint-splattered Tickle Me Elmo dolls, which lurched about, uttering garbled chatter. The show closes Feb. 25.

FAYE HIRSCH Tell me about Batman.

JOYCE PENSATO I started with Batman at the Studio School, in ’75 or ’76. You can see an early one in the book. I was drawn to pop culture and things found on the street. As I’ve said many times, I maintain the tradition of Cézanne, Giacometti, Bill de Kooning. De Kooning for the painting; Giacometti for the drawing. But Mercedes Matter, the dean of the school, wanted me to look at some kind of object. At that time you could get a life-size Batman made of cardboard.

PENSATO The way it looked. I did work with Spiderman, but he was more elegant, more like a dancer. With Batman, it was the shape of the head, the ears. Then from Batman to Mickey Mouse. The ears again. Bart Simpson because of the hair-do.

HIRSCH Why return to Batman now?

PENSATO It was a familiar subject to try to introduce color to.

HIRSCH Tell me about your decision to use the studio materials.

PENSATO When I moved from the old studio on Olive Street, in Williamsburg, we cut out the floor and wall. I didn’t want to leave anything for that guy [the landlord]. I sublet a garage for storage. When we put up the wall in the show, it made it. I thought, “wow, it looks fantastic.” I added a drawing of Batman. The rest was there.

HIRSCH We also see Homer Simpson and the headshot of a young black girl. Is she a particular girl?

PENSATO No, I just love found headshots . . . and that stupid grin.

HIRSCH She’s a young black girl, and the photo is somewhat dated. My first thought was of the girls who were killed during the Civil Rights era. Did you think about that?

PENSATO No—I’m not political. No!

HIRSCH So the fact that she’s black has no significance.

PENSATO No, I just seem to be drawn to images of people of color. It inspires me somehow, a deep thing-I haven’t analyzed it.

HIRSCH Many of the photographs have staples remaining in them—a lot of staples.

PENSATO Oh, I’m the staple queen. Some are my own photographs, some are found photographs. Recently I’ve been going on eBay to find really good stuff. Everything got splattered with paint because of sitting around in the studio. Some are splattered because I put them near a canvas, like on the floor.

HIRSCH Do you think of splattering as a defacement of all this material? Or as an homage, maybe?

PENSATO As composition. I like how the white splatters look. And I’ll take them away if it looks right to me to do that. I mess with the photo, almost like an art piece.

HIRSCH It must have been very traumatic, leaving your studio after more than 30 years.

PENSATO Well, I had five years to work on it with a shrink. It was a legal battle. This is it-all of it, what I live with.

HIRSCH You take many of your own pictures.

PENSATO [Pointing to one of her photographs in the show.] Yeah—here is [the artist] Mike Ballou, working in my kitchen. I thought that was pretty funny. It’s just a mixture.

HIRSCH Did you pose the objects in these pictures?

PENSATO They were just sitting in the studio, in such glorious light. The sun would beam onto an object. It would catch my eye, and I would just snap away. I don’t have that Rembrandt light in my new studio.

HIRSCH Here’s a series of you at a café, with a live Mickey.

PENSATO This was in Paris. They had these Disney characters walking the streets. I had this idea that I would appear in everyone’s family picture. I would move over near Mickey—he would not be aware. Then a friend would take the picture for me.

HIRSCH Strangely, it looks ominous when you’re in the picture, like you’re a stalker or something. Do you mind if people step on things in the gallery?

PENSATO No, they’ve been walked on for 30 years.

HIRSCH Was your studio a little like Francis Bacon’s?

PENSATO Well, some people say . . . No, I think he was messier than me.

HIRSCH Those four big paintings along one wall-were they meant to be seen together?

PENSATO No—but they look so good that way. They look like mug shots to me. They hold the wall, even with all the toys around. Lately I’ve been into Homer. And the past few years I’ve been into clowns. Because they’re so abstract, with the big nose, big lips.

HIRSCH You speak about them very formally, but I’ve always felt there is such a diabolical quality to them, even though they’re funny.

PENSATO I use the subject as a jumping board.

HIRSCH Clowns can be pretty scary—and Batman has a dubious quality.

PENSATO Yes—he’s mysterious, he has a mask on him. And you don’t know what’s behind. See, I don’t see those four paintings as scary. They’re not funny. The characters look like they’re wanted, or something.

HIRSCH Though I’ve never seen a “wanted” poster like that painting of the silver clown.

PENSATO The silver works for me. It’s not white or black, black or white.

HIRSCH Also: silver can be both alluring and industrial. You use it rather ambiguously. And the eyes . . .

PENSATO Yeah—one is behind the mask, and the other is coming at you.

HIRSCH You spent a lot of time in Europe in the ’90s.

PENSATO I was going there every other year. The gallery [Anne de Villepoix] would always find me a studio, and a place to live, and I would stay for six months. I do not speak any French, which is pretty horrible. Here is Groucho Marx-a drawing I did last year. The Flying Moustache.

HIRSCH You want to step back from it, for fear of being hit. And here is the colored Batman.

PENSATO I put some color on, took it off—I could have gone on and on with that. The mask itself was red, blue, then yellow, then white, then black . . .

PENSATO It has a history. A lot of paint. A lot of drips. I worked on it vertically.

HIRSCH Bart’s almost totally abraded in this other drawing.

PENSATO The paper was so great—a handmade paper, and then you could really tear it apart. I use an electric sander; I erased it. You break the paper down.

HIRSCH The studio detritus feels like creative ferment—you sense the same force in the paintings, but the studio debris makes it all the more palpable. Would you do this again?

PENSATO Not exactly like this again. It’s a once in a lifetime thing. The materials might be incorporated in a different way.

It’s such a luxury to do whatever you want in a Chelsea Gallery. I felt that it was time I could say, “This is who I am.” I feel confident. I’m getting a little older. If there were things that were really special to me, I didn’t put them in.

HIRSCH Do you ever say, “Oh, I really wish I hadn’t put that object in. I miss it.”

PENSATO Not really. Like this guy—he used to be a white bear, I put him in a couple of paintings. I’m closer to him. But I really feel like I’ve let go. It’s always fun finding new things, too. And I can always find the old things again, on eBay.

With Kim Kardashian Fined $1.3 Million for Crypto Promotion, Which Other Celebs Could Be in Trouble?