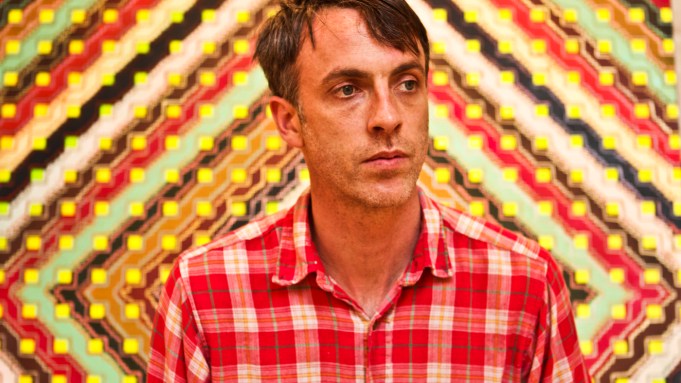 A small painting of the earth hovers several feet above the 11 other works in Jules de Balincourt’s sprawling Bushwick studio. Lopsided and imperfect it hangs heavy, touches of pastels contrast with dark voids to denote different countries. It has all the characteristics of the folk-art aesthetic the artist became known for in the early 2000s. The colors delineated for each landmass could represent the disparities that persist in spite of globalization, an issue on the painter’s mind recently. More than anything, De Balincourt’s globe is a signal that when viewing his second solo show, “Worlds Together, Worlds Apart,” at Galerie Thaddaeus Ropac in Paris [through July 2], details belie ambitions.

True to the artist’s style, the exhibition touches on a range of themes through abstract, pop, folk and figurative paintings. The latter is represented in When’s My Home Leave (2011) a 10-foot-wide painting of a mysterious and raceless man in a tropical setting, looking ready to leave Iraq or Afghanistan. Alternately Untitled (Merging Kissers) (2011) is a Platonic meditation on love.

A.i.A. visited the artist’s Starr Street space-another effort of the artist to create the world in his image-that at one time functioned as a communal center for performance, parties and yoga, just before his show shipped to Paris.

YASHA WALLIN: In terms of your choice of content for your paintings, you’re all over the place. How do you see Boat People (2011) and Big Bang (2011) relating to each other within the context of an exhibition?

JULES DE BALINCOURT: Good question. I don’t know. Do you think they work together, or do you think it just looks like a group show with 12 different artists?

WALLIN: No, with the thin brushstrokes in places allowing the panel to show through and your muted palate, it all looks like your hand and that’s what the viewer sees, first and foremost. If you were an outsider looking in, what would you see as the thread that carries throughout?

DE BALINCOURT: The simple formal elements, color and shape—that’s the thread. But I like the liberty of not including one single defining element. It’s post-post anything. You can have this explosive abstraction or pure representation.

WALLIN: Would you frame your decisions in terms of “commitment?” You said before that you don’t want to be known as someone who continually creates one specific aesthetic-a signature. Do you prefer to keep your claim to authorship loose?

DE BALINCOURT: I have a really hard time taking one idea and carrying it out through a whole body of work. It’s stifling for me. And I’m not interested in selecting one topic.

My work is more about this inundation and saturation of information-be it from the news, videos on YouTube, profiles on Facebook, email or television. The ease with which we travel jolts us with new cultures or sensibilities in a short amount of time. It’s all these different ways of taking in information. I like the idea of processing visual culture, of using myself as an organic transmitter of media.

WALLIN: Do you research particular themes before approaching each panel you work on?

DE BALINCOURT: I’m not researching or looking at one thing specifically. I’m just sort of bouncing through life and the world. As Neanderthal as it sounds, this show is about “me living life in the past few months.” It’s an intuitive, anti-conceptual narrative—that’s the concept. It’s not that I was on this boat or anything, [points to Untitled (Boat-Homer) (2011)], but this is the moment that I was reading about Winslow Homer. I usually don’t directly reference something, but this is loosely based on a Homer piece.  I’m also continually exploring themes of escape, communities on the margins, failed utopias, travel and leisure.

WALLIN: Would you say this current show is a reflection of what you’ve taken in over the last few months and you’re the filter and this is what came out visually?

DE BALINCOURT: I don’t work from drawings or photography. It sounds hokey, but I have a vision of what I want to create. That sounds New Age-y. . . Words betray me.

Every time I have a show it’s a bunch of different visual “paragraphs” or paintings. Everyone is welcome to come in and make their own story by piecing together these paragraphs. It would be too easy to make the whole thing based on one theme: the spectacle, people and architecture, the oppressiveness of architecture, primitiveness versus modernism etc. I don’t know what people will see in it. There’s a certain anxiety to that but also a celebration.

WALLIN: In Dance Dance Revolution (2011), we see layers of figures-some unclear, some descriptive. There is a lot of energy but its difficult to tell the nature of their actions. How would you describe this particular scene?

DE BALINCOURT: This one is loosely based on the images in the news about the goings-on in Libya and Egypt. Often in the pictures one couldn’t tell whether the individuals were celebrating the burgeoning democracy or running from the forces of oppression. Essentially this is how all my paintings operate—are the people on the boat escaping or enjoying a leisurely ride? Are the people in the rooftop painting dancing or seeking refuge from a tsunami or flood? Is the stadium painting of a concert or an emergency relief center like during Hurricane Katrina? I’m interested in that ambiguity.

WALLIN: Some of your work like Manscape (2011) and We Build Things Together (2011) uses pixels within the composition; is this a direct reference to the age of the internet?

DE BALINCOURT: I was playing with this idea of pixelating images, sort of breaking down the figurative imagery a little bit. I wanted the painting to look like it was a celebration or a protest or a freak-out. I’m interested in breaking down the logic of space, processing images through television or the news into these obscure pixilated images. And I was playing with the intersection of technology and this kind of primitive painting, mixing the two worlds. That’s what war can be—a collision of hyper-technological tools and primitive acts of survival between the hunter and the hunted.

WALLIN: A couple works in the exhibition allude to the current political landscape: Dance Dance Revolution and When’s My Home Leave. Do you use painting as a vehicle to express your political views?

DE BALINCOURT: I don’t want it to be so topically obvious. I’m not going to paint a nuclear reactor in Japan to address contemporary fears of living in a nuclear/post-nuclear world. It’s less of a sociological study, and more of an intuitive psychological interpretation.

WALLIN: This new work—from Boys’ Club, to Neither Day or Night (2011) (portraying an elitist, utopian roof party), to Unspecific Things in Specific Spaces (2011) (an ambiguous stadium scene)—are snapshots of contemporary life. But how are they all relevant to your life?

DE BALINCOURT: It’s almost as though I’m literally trying to “paint” the world. And there are different lenses within the paintings. This painting is micro and another is macro. One painting is a close up, pixilated portrait and that pulls out to another painting showing a larger view of a boys club, which is less pixilated, more figurative, more macro.

WALLIN: You mean as you got further into making the show, each painting became more of an abstraction of the previous painting you made? Like Manscape could be seen as an indistinct close up of the more illustrative Boys’ Club?

DE BALINCOURT: Yes. Even this image of an obscure “quilt target thing” could be a super pixel of something part of a technological grid. I’m interested in the contradiction between geometric pixilated representation and more expressionistic painting that’s void of any coherent system or logic; the points of intersection between the human potential for roboticism and our primal core.