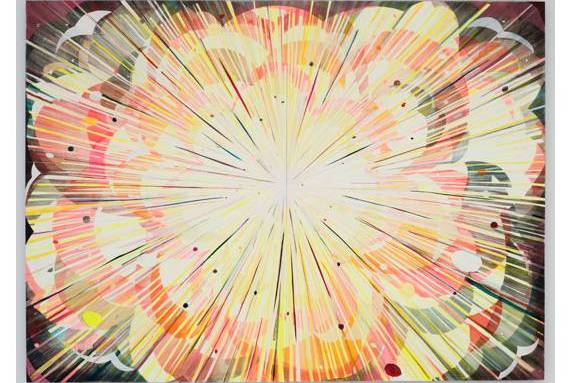 “If you remember the ’60s,” the old joke goes, “you weren’t there.” Ken Johnson, today a widely respected art critic for the New York Times, was not only present but—despite inhaling and taking a few acid trips—still recalls everything clearly. Now he’s finally ready to talk.

Determined to get beyond any formal definition of a psychedelic style, the author corresponded with scores of artists from that era and later, asking them if their work—and their perception of other people’s art—has been affected by the cultural environment spawned by hallucinogenics. Quoting some, paraphrasing others, he offers, via his own critical ruminations, a bold rereading of the art history of the last 50 years.

RICHARD VINE: How and when did you get the idea to take this approach?

KEN JOHNSON: The idea came to me sometime in the early ’90s. I don’t know what prompted the specific focus on psychedelic influence, but my first thought was that it would be interesting to interview artists of all kinds who came of age in the ’60s and ask them directly if they’d taken consciousness-altering drugs and if doing so influenced their art. That project just never happened.

Later, I began to notice more and more art in the galleries that looked psychedelic but was made by people who came along later—Pipilotti Rist, Jules de Balincourt and Erik Parker, to name a few. I thought that there was something more going on here than just drug-taking. Nostalgia, maybe, for a time of greater psychological and social experimentation than the current day seems to offer.

VINE: Why do you think the widespread liberation happened when it did?

JOHNSON: Fundamentally, I think, the advent of psychedelic culture coincided with an epistemological crisis in Western culture. In the Vietnam War era, it became hard to know what was true-politically, theologically, scientifically, philosophically and otherwise. So the thing to do was to ask what our consciousness allows or enables us to know. If you alter consciousness, do you alter what people take for reality? Psychedelic drugs, for those who took them, made such questions vivid and urgent.

By 2008, when I talked to editor Chris Lyon at Prestel, I had come to think the primary evidence would be the art itself. Whether or not a given artist did drugs would be interesting to know but not necessary. I would simply assume that art since the ’60s was influenced by psychedelic drugs and culture, and then see how things looked from that perspective.

VINE: What kind of response did you typically get?

JOHNSON: Most people seemed to think it was a great concept—or, at least, their own idea of it seemed to excite them. But I don’t think many understood that my project was not just to look back on an amusing cultural cul-de-sac. Trying to convince people that the influence of psychedelic culture on art was deeper, wider and more pervasive than anyone had heretofore proposed was much harder. Most of the work in Are You Experienced? does not match the usual way of imagining “psychedelic art.”

VINE: Can you estimate what percentage of your correspondents were directly influenced by drugs as opposed to just the general psychedelic zeitgeist?

JOHNSON: I’m not sure the two are separable. If you are my age or younger, even if you have never tripped or smoked marijuana, you probably know people who have and you’ve heard all kinds of stories about the experience. (President Obama says he tried cocaine; do you think he ever did shrooms? Timothy Leary claimed that President Kennedy tripped in the White House.) Anyway, for the influence of the psychedelic zeitgeist to be as powerful as it has been, there had to be a significant ongoing usage in the population. And I assume that the rate among artists is probably greater than in the general population.

VINE: Who told the most striking story?

JOHNSON: In the late ’50s one of my informants took part in an LSD study at New York University. They gave him a tab, told him to go home and take it and then report back. He painted a 40-foot mural in his studio. He said it was a great experience, and later, a big part of his career was to paint temporary, site-specific murals in galleries and museums. He didn’t do them while tripping, however.

VINE: You include artists (Damien Hirst, Inka Essenhigh) who were toddlers in the late ’60s. How would you distinguish the psychedelic esthetic from the more limited and era-specific social phenomenon?

JOHNSON: Hmmm, it had not occurred to me to make that distinction. I guess there was that period we know as “the ’60s,” from around 1965 to, I don’t know, when the last U.S. helicopter left Vietnam in 1975. A lot of artists lived, thrived and produced exciting new art during those years—Gordon Matta Clark, Bas Jan Ader, Robert Smithson, Eva Hesse and Carolee Schneemann, to name just a few. Their ’60s work often conveys a sense of entering a really new landscape, metaphorically speaking. For culture in general there seemed to be a new frontier, defined not by new technology but by new forms of consciousness. At some point later, people began to look back on the ’60s as a period that had its own distinctive style and outlook. The kind of future-oriented euphoria that animated a lot of the art of the ’60s-both high and low-was not available to those looking back.

VINE: Your thesis is extremely broad, taking in not only those who have obvious links with psychedelic experience (Peter Saul, Jim Nutt, Fred Tomaselli, Takashi Murakami) but also those whose visual peculiarities are usually attributed to other concerns (Martin Ramirez, Cindy Sherman, Jeff Koons) and those who would seem to have their cool, rational heads somewhere else altogether (Carl Andre, Donald Judd, Sol LeWitt). Where do you draw the lines? And doesn’t a concept that takes in so much variety risk becoming, paradoxically, void of meaning—not a useful category at all?

But rather than setting up a new category, I wanted to ask a question. How does the story we tell about art of the past half-century change if we consider psychedelia an important influence? What might we then notice about the work that we otherwise overlook? No one is obliged to try this at home. But if some do, what might they discover? It is a heuristic device, a lens for looking and interpreting, not a category.

The artists you mention produce works that don’t seem to share obvious visual traits. Do they have anything in common? All, I think, are preoccupied with the nature of consciousness and its relationship to perception and “real world” experience. The Minimalists were interested in the perception of space and time, and they tried to reduce distraction in order to focus attention on those experiences. Cindy Sherman and the Pictures Generation artists were all about how mass-mediated fantasy affects consciousness and what we expect of reality. Jeff Koons went to Chicago to study with and later become the studio assistant of Ed Paschke, whose paintings are as psychedelic as can be. Now Koons produces objects that Carroll Dunham told me he finds “alarmingly psychedelic.” Whether this is convincing, or even interesting, I leave to the reader.

I like to think that this approach reveals something—an ethos underlying all the kinds of art that you and I take seriously. A big part of that is a predilection for toying with categories. Because categories constrain consciousness. If this is not the sort of thing that academic art history, in its excessive respect for established categories, will entertain, then I say it’s the academy’s loss.

VINE: If the essence of psychedelic art is that it stems from and/or induces altered consciousness, why limit it to the post-LSD period? Wasn’t a Gothic cathedral totally far out—as mind-blowing as any Fillmore West concert and lightshow—for its era’s trembling believers? Didn’t certain Victorian viewers groove for hours on tobacco, brandy and high-gloss depictions of Oriental harems and imperialist battle scenes?

JOHNSON: Comparisons like these are certainly intriguing and relevant. But one difference is that psychedelic culture was a grassroots, popular phenomenon. Millions of people, in an industrialized society, taking psychoactive drugs for purposes of fun and consciousness expansion—this was unprecedented, as far as I know.

Medieval Christian culture was popular in a very different way. Maybe Gothic art did induce altered states of consciousness, but to facilitate ecstatic enjoyment as an end in itself was not the conscious goal. The purpose was to cement people ever more firmly to Church dogma and institutional hierarchy. Medieval religious culture was far from pluralistic, and it was strictly administered from the top down. If we today find Gothic art trippy, that says more about us than it does about its audience then. We might wonder what Grünewald and Bosch were on, but the culture of their day certainly did not favor the use of substances as a way to get close to God.

Modern psychedelic revelations tend to be idiosyncratic and thus unlikely to inspire devotion to any institutionalized mythology. While psychedelics may have helped bring people together in cultish communities, the groups themselves are unstable. I suppose some kind of psychedelic fascism is conceivable, but that’s not what happened.

JOHNSON: Maybe because a common “revelation” for the tripper is the discovery that God is within or that—because God is all-pervasive—the tripper is, in some sense, God or a piece of God. Even today, this continues to be very appealing to artists, most of whom, I contend, would say that, if there is such a thing as transcendence, it comes from within, as a function of human consciousness.

VINE: Is that an experience that’s open to everyone?

JOHNSON: Now, yes—thanks to psychedelics. Contrast their effects to the mandarin forms of proto-psychedelic delectation you mentioned earlier, the kind enjoyed by Victorian aristocrats and trade moguls. To my mind, that mystique had to do with exclusivity—be it the exclusivity of the decadent ruling class or of a bohemian underground. The idea of taking drugs in order to experience altered states of consciousness would have been nonsensical to most people in the West in the 19th century. (Sure, drugs like hash, opium and nitrous oxide were avidly sampled by citizens of the beau monde, a tiny subculture. But the masses, I believe, stuck to booze.)

All this hinges on the idea that at a certain point in the ’60s, countless people of the young, educated middle-class took consciousness into their own hands. (People who tried such a thing in the Middle Ages and the Renaissance tended to get burned alive.) A critical mass of this population of the best and the brightest had directly experienced via drugs the malleability of consciousness: its complexity, its way of processing sensory information, how its changes mold what is taken for reality. Part of the excitement was that everyone was participating in a grand, world-changing adventure. In its most positive mode, it was the opposite of exclusive.

VINE: And, in your view, the mind trip continues to this day?

JOHNSON: A lot of people, including many artists, sense that the psychedelic door has not been closed. The problem of consciousness is only getting knottier. Look how many movies there are about different states of consciousness, about being adrift in space and time, about memory loss. Before the ’60s, few leading intellectuals thought consciousness itself was worth studying. Now it’s a major topic in philosophy as well as cognitive science. Psychedelia is for art today what water is for fish-an environment so pervasive as to pass almost unnoticed.

Egypt’s Great Pyramids and Sphinx Could Be Lost Due to Climate Change, Experts Say

Review: This Dalstrong Knife Sharpened Our Kitchen Skills Right Out of the Box