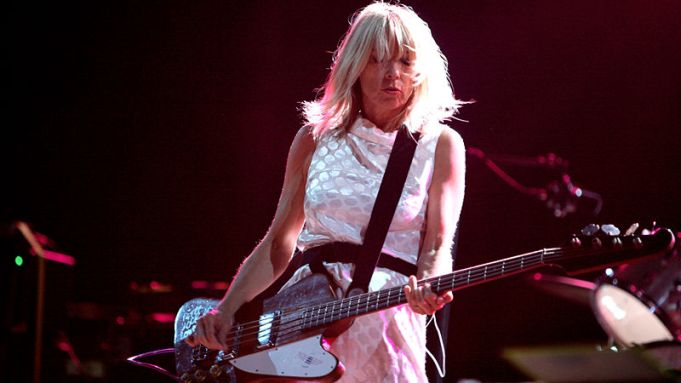 Since the early 1980s, when she and Sonic Youth performed at art venues like White Columns in New York, Kim Gordon (and her bandmate and husband, artist Thurston Moore) has almost single-handedly represented a viable overlap of visual art and rock music, famously commissioning iconic album covers by Raymond Pettibon and Gerhard Richter. After moving to New York after art school in the ’70s, Gordon contributed writing to periodicals like Real Life and Artforum, analyzing subjects like audience-performer dynamics in art rock clubs and appropriating the banal language of lifestyle magazines to report the outcomes of her experimental interior decorating project, Design Office.

Gordon has said that she originally picked up the bass to deepen her research on a project about the rock group as a site of male bonding; she later went on to perform with several of her own bands, including early collaborations with Moore, before forming Sonic Youth with him and guitarist Lee Ranaldo in 1981.

Her art career, as much as her music career, entails a series of longstanding experiments in collaboration, as evinced by the exhibition “Kim’s Bedroom” which she curated in 2000 at Mu-De Witte Dame in the Netherlands: a diverse showcase of Gordon’s associates from her work over the years in film, music, fashion, and contemporary art, and that of contemporaries like Cat Power’s Chan Marshall and DNA’s legendary drummer Ikue Mori, directors Spike Jonze and Sofia Coppola, and artists Mike Kelley and Tony Oursler. In recent years she’s been known for her music performances with New York artist Jutta Koether; in 2007 the two produced an exhibition at Reena Spaulings Fine Art that turned the gallery into a month-long festival of screenings, live concerts and dance performances.

The works in her recently opened show, The Noise Paintings, at the gallery space of rare bookseller John McWhinnie at Glenn Horowitz, feature drippily scrawled names of obscure experimental music acts graffitied over white canvas. Occupying a role she adopted early, Gordon appears as the scholarly observer of the rock band. The store’s display shelves are stocked with book and music selections from the personal collection of Gordon and her family, ranging from an out-of-print exhibition catalogue by Paul Thek to zines by longtime Sonic Youth friend and collaborator Raymond Pettibon and 7″s by Patti Smith and Francoise Hardy. Throughout, she plays with the insider currency of these personalities and references, repositioning their cult value as high end merchandise. The Noise Paintings also appear in two recent publications by Gordon: The Noise Paintings, a limited edition signed and numbered portfolio box set, accompanied by an original artwork and cassette recording, published in cooperation with Ecstatic Peace Library and JMc & GHB Editions; and the monograph Performing/Guzzling, co-produced by art book house Rizzoli and Swiss independent publisher Nieves.

KAYLA GUTHRIE:  I wanted to start off by asking you about the works in the show at John McWhinnie’s gallery in New York, which also appear in your new book, Performing/Guzzling (Rizzoli/Nieves).

KIM GORDON: The paintings at McWhinnie’s are a series of paintings taken from names of noise bands.

GUTHRIE: Right, I recognize a lot of them. What is it about them that appealed to you? How do you see these bands in relation to the art context?

GORDON: The noise paintings are probably the most literal thing that I’ve done. These to me are like T-shirt souvenirs from travel destinations. What could be more obscure and non-mainstream than underground noise music? It’s something that’s never going to become popular or mainstream or co-opted. So it’s the most pure thing I can think of, which I’m then using as content for art.

GUTHRIE: There’s an experiential purity to noise music too. Because it’s about noise rather than a structure like rhythm, or melody, it’s different each time. Like a work of art.

GORDON: It’s very performative and then once it’s over, it’s over. Some people like to listen to it but I get more out of seeing it as a performance. To me it’s very performance hinged. Which is what they used to say about free jazz. Once it’s in the air it’s gone. That’s something also just about live performance: it’ll never happen again the same way.

GUTHRIE: Are you memorializing the bands? Do you feel as if you’re giving them permanence?

GORDON: I’m not memorializing it; I’m making souvenirs for people for places they’ve never been to. I don’t think it matters if people have seen, or are familiar with, these bands. I don’t even know all the bands. With some I just picked the names at random. I’d never heard them or seen them. Other bands I do know quite well. It’s more about the name, I guess, and how the painting comes through that.

GUTHRIE: Are you good at naming bands when you come up with projects?

GUTHRIE:  Does it matter what you choose to name your band?

GORDON: It is important. Actually, [artist-critic] John Miller’s text begins by talking about how important it is choosing a band name, what you go through.

GUTHRIE: It’s funny that the name Sonic Youth has been so enduring that it’s gone beyond youth.

GORDON: We thought of it more as “The Sonic Youth”—like The Rolling Stones. You know like the Rolling Stones aren’t literally rolling stones, and the Beatles aren’t beetles. So, [LAUGHS] we’re not young. It was more of a metaphor. When we thought of the name Sonic Youth it was sort of before the hardcore thing. And then all these hardcore bands came along with the word “youth” in their names, so everyone thought we were a hardcore band, which was confusing.

GUTHRIE: Did I ask you about the title of the Rizzoli book, Performing/Guzzling?

GORDON: It’s just about taking in stuff and putting it out.

GUTHRIE: So it’s about making work?

GORDON: It’s not like about drinking and performing. It’s more basic.

GUTHRIE: And the watercolor face portraits that appear in the book: they are similar to those that showed at Participant Inc a couple years ago. Has this been a continuous series of work?

GORDON: Yeah. I’ve been making work pretty regularly since the mid-1990s. I came to New York to do art, and did some art-related activities in the ’80s, then got more involved with the band and stuff. In the early or mid-’90s I was doing acrylic paintings of girls’ faces; some were people I knew…. I think there’s a Courtney [Love] one that looked kind of like her. They were acrylics that looked like watercolors. That was just a brief series and then I returned to more conceptual installations. A few years ago I started doing the faces because I had this rice paper, and I thought, “Fuck it, I’m just going to paint because I like to paint and not worry that it means anything.” But I realized I liked making them really fragmented and ghost-like. It reminded me of when you would be seeing people in the audience. I liked that idea about them.

GUTHRIE: Previously with Nieves you’ve done the “Chronicles” books, which are smaller in size and not as straightforward; each is less like a collection of works and more like an art project in itself.

GORDON: I was riffing off of the Bob Dylan book, Chronicles. It was a joke, because you know his history is such a fake history…

GUTHRIE: His history is a fake history?

GORDON: Oh yeah. I don’t know if you read his book, but the couple in the beginning-the sort of bohemian couple-they were totally fake. There’s a lot of just fake stuff that he made up. For instance, his name is fake…

GUTHRIE: Is there the same interest in self-mythologization in your books? In Chronicles 2, there’s photos of you, and a conversation between you and your Free Kitten bandmate, Julie Cafritz. It appears as autobiography… Are there fictional parts?

GORDON: Well, that conversation is a completely made-up conversation, but it’s based on something that Julie and I might have talked about. The Bob Dylan book, for instance, we did talk about it. And in my daily life, I get to see a lot of really awful photographs of myself, so I thought, “I’m just putting in photographs that I like, just for the hell of it”playing off the idea of the signature of the artist?

GUTHRIE: How does the theme of the rock star appear in your work as a visual artist?

GORDON: I can’t escape it, although I’m not really a rock star. But I am known primarily for playing music. For years I tried to separate making music and art. I didn’t want it to be like… who’s the Rolling Stone who paints? But it’s just impossible, and I realized I have all this subject matter that is related to my music, and I started delving into it. I’ve always been interested in the relationship between performer and audience: that’s what I always loved about Dan Graham’s work. So I was playing off myself as a performer.

GUTHRIE: The poems in the back of Performing/Guzzling are lyrics from the last Free Kitten record, right?

GORDON: Yes, it’s a band I’ve been in off and on. That was the last record we did in like 10 years. So mostly off. [LAUGHS] I think women are natural anarchists because you’re always operating in a male framework. I think that’s why women with guns always look so appealing.

GUTHRIE: What about women with musical instruments?

GORDON: I guess that’s kind of similar. Although Sarah Palin with a gun isn’t very appealing.

GUTHRIE: It’s true; seems like freedom is not first and foremost on her agenda. Must be hard making so many mistakes in public though. I feel bad for her.

GORDON: I don’t feel bad for her at all.

GUTHRIE: Jutta Koether says in her essay in the Nieves/Rizzoli book, “Most of all I like that they don’t give a damn.” What do you think she means; is she talking about a form of anarchy?

GORDON: Maybe it’s just that they’re very free or that I’m not addressing painting per se in the conversation. I think about it and then I don’t think about it: sometimes I’m trying not to paint and then sometimes I kind of am. I always like to leave some space for the viewer to find something, or the listener.

THE NOISE PAINTINGS IS ON VIEW THROUGH MAY 8. JOHN MCWHINNIE IS LOCATED AT 50 1/2 EAST 64 STREET, NEW YORK.